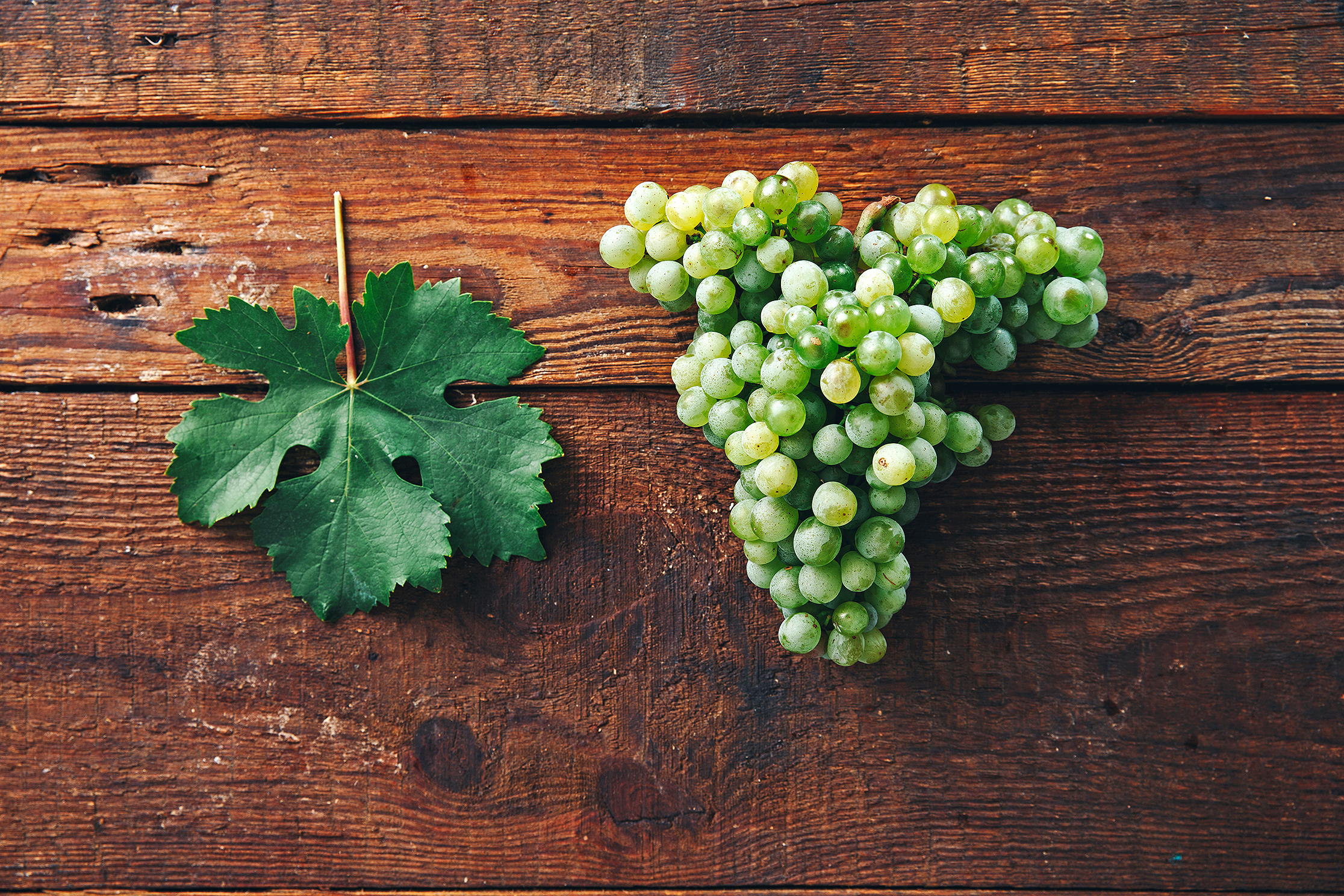 While it’s the ultra-trendy flagship of Austrian white wine, Grüner Veltliner is also something of a force in the vineyards of the neighboring Czech Republic, Slovakia and also here in Hungary, where it is known as Zöldveltelini.

While the grape remains very much in the background locally, its distinctive character does come through nicely in various Hungarian terroirs. It can pretty much be considered as an indigenous variety and, for my palate, warrants serious consideration.

Grüner Veltliner is a natural crossing of Traminer and an obscure grape variety that was tracked down to St. Georgen in Austria’s Burgenland, and then named after its place of discovery, since it didn’t actually have a name. The grape bears no relation to either Roter Veltliner or Frühroter Veltliner.

While this mid-ripening grape favors relatively warm conditions, it struggles in very dry periods. It can be used to make wine that’s anything from light and zesty when harvested in early September, to rich and full bodied when left out until October. According to Austrianwine.com, it became the most widely planted grape in Austria in the 1950s because of the introduction then of Lenz Moser’s Hochkultur (High Culture) training system.

It thrives in loess-based soil, as in Austria’s Wagram wine region, which importantly retains water to quench the grape’s considerable thirst, as well as in the clay of Niederösterreich and mixed soils of the northern Burgenland.

It is instructive to travel to the Kamptal and Wachau regions of Austria, where Riesling tends to be planted in the steep, terraced vineyards composed of primary rock, or Urgenstein, of gneiss, granite and/or schist, with Grüner Veltliner planted in the loess, which is usually lower down.

Bert Salomon of Salomon Undhof told me that the rocky soils are for Riesling, while Grüner Veltliner is less drought resistant and favors loess and mixed soils. However, there are always exceptions, with some winemakers getting good results (and leaner wines) from the rock. The grape variety also does very well in the limestone soils of the Traisental region.

Meanwhile, in Hungary, there are some 1,500 hectares of Zöldveltelini planted in Hungary (from an overall total of 64,000 hectares of vineyards) compared to 13,000 in Austria, according to Borbázis Borkereskedés.

The wine distributor has just launched Zöld Tavasz Veltelinivel! (Green Spring with Veltelini), which is a three-pronged campaign that’s putting the focus on the first green buds of spring, the grape variety itself, and the environment; bottles can be returned to Borbázis, whose team will have them recycled, and also give members a HUF 50 discount of their subsequent purchases.

Borbázis estimates that 17.250 kWh energy, 16 tonnes of carbon dioxide, 50 tonnes of waste, and 60 tonnes of raw material have so far been saved with its bottle-return program (to sign up go to borbazis.hu/uvegvisszavaltas).

Sustainability is a burning issue in the wine world and the amount of bottles that are simply chucked in the garbage is no doubt quite staggering, and initiatives of this sort have to be applauded. As bottles are not recycled in household waste in Budapest, I personally lug my bottles to a bottle bank, which appear to be few and far between.

A trio of Zöldveltelini wines courtesy of Borbázis showed good quality and different aspects of what the grape can do. It was also nice to see what the grape makes of volcanic soils, which abound in Hungary.

From the basalt soils of Badacsony, Büttner Winery’s Zöldveltelini 2019 was vinified solely in the tank, as most Zöldveltelini is. Pale lemon in color, it is medium-bodied, varietally pure and vibrant, offering trademark aromas and flavors of white pepper, lime and lemon zest, grapefruit, dill and fresh cut grass, with a delicious touch of white pepper rounding it off on the zesty finish.

It initially feels that it has only medium length but it has a buzzing acidity that returns to tingle and take the wine that bit further. It costs HUF 3,120 (with various discounts for members) from Borbázis.

Itt és Most Pince Zöldveltelini 2018 comes from Mátra, where the topsoil is water-retaining clay over volcanic bedrock. It was spontaneously fermented in stainless steel tanks and kept on the fine lees for three to four months of its one-year ageing in the tank.

This family cellar currently has 1.8 hectares out of a total four hectares yielding, and plans to grow pre-phylloxera varieties on the rest, winery owner Tibor Hofmann tells the Budapest Business Journal.

His 2018 Zöldveltelini has a deep lemon color, with fairly intense citrusy aromas of lemon and lime peel, acacia flower, lemon, honey and creamy peach, with similar notes on the slightly oily and complex palate that shows a nice bit of age. It is excellent value at HUF 2,540 from Borbázis.

Coming from close to the Austrian border, Steigler Pince’s Zöldveltelini 2019 is an organic wine from mica and brown forest soil. Harvested on September 24, it was fermented in 225-liter Zemplén oak barrels, then aged for eight months on the fine lees.

It has a deep lemon color, with ripe Williams pear, lemongrass, lime zest and lemon, some tropical fruit, green herbs and a touch of vanilla from the oak on the quite pronounced nose. It is rich and dense on the palate, although it has fairly soft acidity, which delivers a medium rather than long finish that nevertheless winds down with a refreshing touch of lime zest. Expect to pay HUF 4,450 from Borbázis Borkereskedés.

Zöldveltelini clearly has an affinity with volcanic soils. Villa Tolnay on Csobánc hegy in the Tapolca Basin is a winery that makes exciting wines from the variety, including a single-vineyard bottling from the Panoráma vineyard that overlooks Lake Balaton (the 2019 is just out and costs HUF 4,950 from Bortársaság). It is also good in the loess soils on the other side of Balaton in the Balatonboglár wine region.

The limestone of Etyek and Mór also yield some great Grüner. “It’s a strong variety and easy to handle. You can make crispy, fresh wines from it when you harvest in early September, but you can also make fuller wines if you leave it out until October,” Mór winemaker Csaba Miklós of the Mikloscsabi pincéje tells the BBJ.

A marketing whizz with super creative labels, Miklós Csabi (as he is more usually known) calls his later-harvested version GimmeMór. A spontaneously fermented tank sample of the 2020 revealed pure varietal notes and a dense, oily structure.

This article was first published in the Budapest Business Journal print issue of  April 9, 2021.

Home Videos The WORLD of WINE – Wine News. Cheap wine, tasting notes and cooking with wine The World of Wine – May 2021 … END_OF_DOCUMENT_TOKEN_TO_BE_REPLACED

How to visit Napa Valley on a Budget. In this video Carson and I explain a few ways to enjoy Napa on the cheap. Tip and advice about how to visit Napa … END_OF_DOCUMENT_TOKEN_TO_BE_REPLACED

Home Videos Get To Know Argentina Wine | Wine Folly If you love Malbec, Argentina is your ultimate wine region. But that’s not … END_OF_DOCUMENT_TOKEN_TO_BE_REPLACED