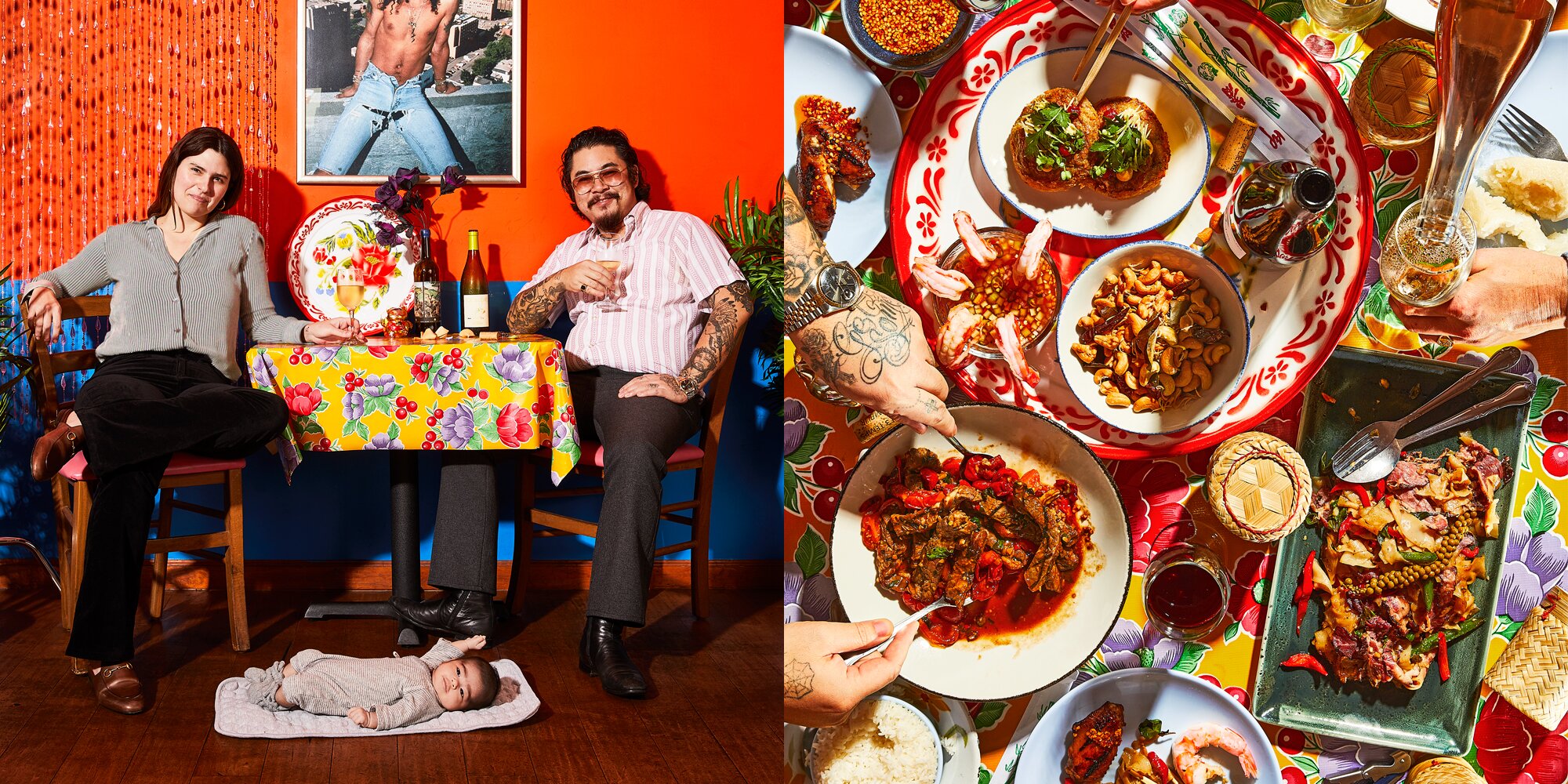 Sarah Yenbamroong had just managed to pack up her entire life and squeeze it into her tiny Acura when she got a text from her then-boyfriend, chef Kris Yenbamroong: “Hey, I need you to save some room in your trunk for wine.” It was 2011, and Kris was flying out from Los Angeles to New York City to pick up Sarah and help her move across the country—but accommodating his request meant sacrificing an entire suitcase of shoes. The couple stopped by The Ten Bells, a natural wine bar in Lower Manhattan, and picked up three cases of wine from Noëlla Morantin before hitting the road. “I was bitter he took up so much space in my trunk,” she says with a laugh.

The story is emblematic of how far Kris, a 2016 F&W Best New Chef, is willing to go to source bottles for the now-married couple’s Thai restaurant, Night + Market (and its three offshoots, including a new location in Las Vegas). The restaurants, which are known for no-rules, high-impact Thai cooking, have long had some of the best and most boundary pushing wine lists in the country. They have also earned two James Beard Award nominations in the Outstanding Wine Program category for their curation, which reflects Kris’ passion for natural wines and small producers.

Tender wide rice noodles pick up color and peppery, meaty flavor when charred in a wok with thick slices of pastrami. This speedy, flavor-packed dish cooks up quickly, so have all the ingredients at the ready before heating the wok.

Kris’ infatuation with natural wines dates back to 2008, when there were only a handful of spots stocking them in L.A. and even fewer distributors. To build his collection, Kris would embark on wine-sourcing trips to France, where he would show up at a winemaker’s doorstep, saying, “Hi, my name is Kris. I have a restaurant; we pour your wine. I was hoping to meet with you and taste.” It was also in 2008 that he took over his family’s now-shuttered Thai restaurant, Talésai. Excited to serve the obscure wines that he loved so much, Kris put them on the wine list.

He quickly ran into trouble. “I had to compromise with everything and try to balance what had existed for 25 years and satisfied the existing customer, while also trying to do this new thing,” he says. “That never works out.” Kris also found himself up against rigid notions of what wines could pair with Thai food. “There’s no shortage of Asian restaurants that have an extensive Riesling list,” Kris says. “I don’t need to be another one of those.”

This sweet and savory snack mix is seriously delicious. Lime leaves and lemongrass bring citrusy flavor to the buttery cashews, toasted coconut, and crispy garlic. Frying each element individually ensures crunchy—not burned—components. Use a food processor to make quick work of the garlic.

Spicy fresh ginger brings brightness and a pleasant crunch to this salad. Cooked and cooled rice is seasoned with curry paste and then dusted with a generous coating of rice flour before being fried until it becomes über-crunchy. For the crispiest result, chill the rice for at least 1 day before assembling.

Kris attributes the push to dampen spicy Asian cooking with sweet white wines to the absence of a long history of Asian winemaking traditions. “At some point, some crafty wine people decided that with Asian food, this is what you have to have,” he says. “All the books write the same stuff.” He couldn’t understand why people never thought to pair dry wines with Thai food.

These frustrations shaped his approach to Night + Market, which Kris opened in the empty space next to Talésai in 2010. “I was probably the only one who saw it this way, but I saw it as a wine place,” he explains. He launched with later opening hours, a menu of eight dishes centered around simple Thai drinking foods, and a wine list showcasing 30 of the wines he deeply loved. It was unlike any other restaurant in Los Angeles—and it was an instant failure. “I pursued this thing, which was like a totally foolish kind of fantasy, and then no one came,” he recalls.

Freshly grated Parmigiano-Reggiano adds an unexpected hit of nutty, sweet flavor to rib eye steaks marinated in Thai seasoning sauce, white pepper, and soy sauce. Quickly searing the steaks allows them to develop a dark, flavorful crust before resting, slicing, and finishing them in the pan sauce, where they absorb even more flavor and cook to a perfect medium-rare. Stirring fresh Thai basil into the warm steak and tomatoes just before serving allows it to gently perfume the whole dish.

After nearly a year, Kris accosted Jonathan Gold, the late legendary food writer and restaurant critic, at an event and implored him to come by. Kris won him over, and after Gold’s glowing review ran in LA Weekly, the rest of the city followed. Tables started to fill up, and as Kris, who had no formal culinary training, grew in confidence, he started to expand the menu to include a roster of dishes, like Prakas’ Rib Eye (named for his dad, Prakas, who created the recipe), a boneless rib eye steak marinated in Thai seasonings and topped with Parmigiano-Reggiano cheese, that were less beholden to tradition and more driven by flavor—and more suited to pairing with his favorite wines.

Blending fresh shrimp with pork fat creates a juicy, tender paste to spread on springy milk bread. Pork fat, from the back or belly (not rendered, like lard), can be easily chopped after freezing until quite firm, about 20 minutes.

Unexpectedly, the Yenbamroongs’ approach to wine pairing takes beer as a point of inspiration. “In Thailand, with Thai food you basically have one drink, which is a Singha Light beer,” Kris explains. “It’s really simple, really clean, refreshing, and it doesn’t weigh you down.” The wine list is formulated with the idea of refreshing in mind: lightly chilled reds, dry whites, orange wines from Georgia, pét-nats. Most essentially, to combat the perception that sweet wines are the ideal accompaniment to Thai cuisine—when in fact they often mute its complex flavors—the couple looks for wines that amplify those flavors instead.

Kris Yenbamroong invites a quick garlic aioli and super spicy fish sauce–based dipping sauce to the shrimp cocktail party. Using a fork to crush the garlic for the aioli leaves it sweeter and less pungent while still breaking down the fibrous cloves for a creamy dipping sauce. Serve the shrimp alongside ramekins of aioli and nam jim seafood sauce for dipping, or arrange the shrimp around the rim of a coupe glass filled with nam jim for more intense flavor.

Low and slow grilling keeps these wings juicy and gives the skin time to render and char. Jaew, a sweet and sour chile sauce, delivers a heat-packed punch.

It’s not uncommon to find three or four different bottles of wine on the table at Night + Market, where the food is served family-style, and Sarah and Kris encourage diners to go back and forth among the wines as they go back and forth among dishes. “It just kind of has its own rhythm,” Kris says. “You might want to have a little bit of something and then try it with one wine, and then have another bite and try it with another wine. And that’s part of the fun. It’s not like ‘OK, finish this so I can clear everything and we can bring out the next wine.'”

Home Videos The WORLD of WINE – Wine News. Cheap wine, tasting notes and cooking with wine The World of Wine – May 2021 … END_OF_DOCUMENT_TOKEN_TO_BE_REPLACED

How to visit Napa Valley on a Budget. In this video Carson and I explain a few ways to enjoy Napa on the cheap. Tip and advice about how to visit Napa … END_OF_DOCUMENT_TOKEN_TO_BE_REPLACED

Home Videos Get To Know Argentina Wine | Wine Folly If you love Malbec, Argentina is your ultimate wine region. But that’s not … END_OF_DOCUMENT_TOKEN_TO_BE_REPLACED