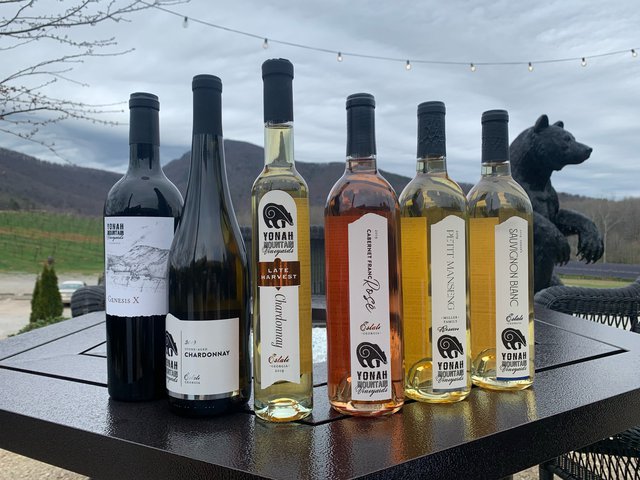 Not every winemaker can turn spoiled wine into gold.

But Tristen Vanhoff of Yonah Mountain Vineyards did just that when he crafted Genesis X Classic, a red blend that recently won double gold in the San Francisco Chronicle Wine Competition, the largest wine contest in North America.

The event included 48 judges who evaluated around 5,700 wines from over 1,000 wineries.

Bob Miller, owner of Yonah Mountain Vineyards, said the competition is considered the “Super Bowl of wine contests,” and is the only one his winery participates in each year.

Genesis X Classic was entered in the red blend category for wines over $60. In order to receive double gold, Miller said a wine must receive gold from the five judges in its division.

“I think the Classic is extremely well balanced, not one of the varietals overrides the other,” Miller said. “It goes down smooth like velvet.”

Vanhoff said the Genesis X Classic is a red blend of 50% cabernet sauvignon, 30% merlot and 20% malbec. Unlike the other versions of Genesis he has made, which offer a fruit-forward nature, he said this one introduced a bit of “the old world” to the mix.

When Miller noticed three of his barrels were contaminated with this yeast, he told Vanhoff, the winery’s winemaker, to throw them out.

“Then Tristen said, ‘Wait, let me see if I can refine it and bring it down to where it’s a really nice wine,’” Miller recounted. “The proof is in the results.”

In addition to taking a risk with the yeast, Vanhoff said he underwent a long process of blending different barrels of wine to find the right combination for Genesis X Classic. After 40 different trials, he took the best five to Miller and a few others to help pick the winner.

“I went down to watch the blending trials, and he had 80 different tastes on the table,” Miller said. “The skill level in which Tristen and his team has to taste different wines and put together what is the best, not everybody has that skill.”

The birth of the winery’s 2019 Stone-Ages Estate Chardonnay, which earned a silver medal in the competition, is also an experiment that paid off.

Vanhoff explained that all of Yonah Mountain Vineyards’ barrels were full, and he didn’t have any place to ferment the chardonnay. Getting creative, he put it inside concrete fermenters, something he had never done before. The result — a crisp and bright wine.

The other silver medal winners include the 2019 Late Harvest Chardonnay, 2019 Cabernet Franc Rose and 2019 Petit Manseng. Bronze medals went to the winery’s 2019 Sauvignon Blanc and the label design for Genesis X Classic.

Home Videos The WORLD of WINE – Wine News. Cheap wine, tasting notes and cooking with wine The World of Wine – May 2021 … END_OF_DOCUMENT_TOKEN_TO_BE_REPLACED

How to visit Napa Valley on a Budget. In this video Carson and I explain a few ways to enjoy Napa on the cheap. Tip and advice about how to visit Napa … END_OF_DOCUMENT_TOKEN_TO_BE_REPLACED

Home Videos Get To Know Argentina Wine | Wine Folly If you love Malbec, Argentina is your ultimate wine region. But that’s not … END_OF_DOCUMENT_TOKEN_TO_BE_REPLACED