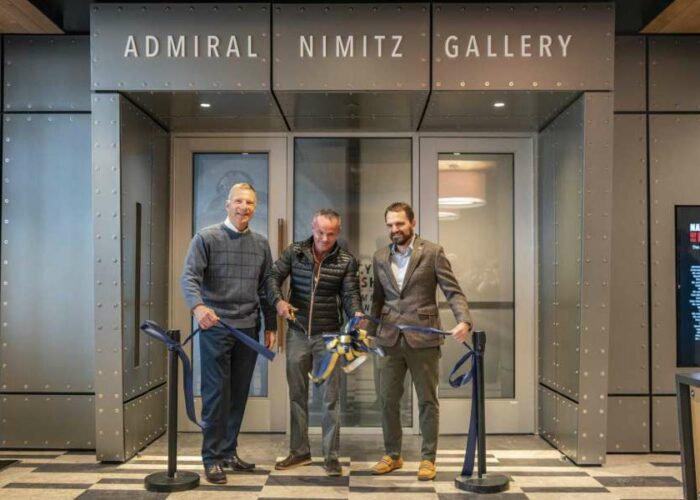 The National Museum of the Pacific War in Fredericksburg was recently named a Smithsonian Affiliate.

There’s a renewed reason to head to Fredericksburg, and it has nothing to do with wine tasting or German fare.

The National Museum of the Pacific War announced its new status as a Smithsonian Affiliate this week. Reportedly, less than one-percent of museums nationwide share the distinction. Museum director Rorie Cartier says that NMPW is one of only five museums to receive affiliate status this year.

“The Smithsonian Affiliation was established in 2016 to facilitate this two-way relationship,” Cartier explains. “Everyone knows the Smithsonian, right? It’s the national leader, and this program really increases discovery and education in smaller communities. If there’s a particular artifact or collection, we can work to acquire it if that loan helps us tell a story better.”

It’s a big win for NMPW, which utilizes more than 55,000 square of exhibition space across three galleries and six acres in downtown Fredericksburg to fulfill its mission: educating present and future generations about World War II in the Asia Pacific theater.

“The main question I get it why do we have a Pacific War museum in the middle of Texas Hill Country?” Cartier says with a laugh. “It’s a complicated history.”

Fredericksburg is the birthplace of the late Admiral Chester W. Nimitz who led air, land and sea forces during WWII as Commander-in-Chief of Allied Forces, Pacific Ocean area. When the Texas Historical Commission and Admiral Nimitz Foundation — which still operates NMPW today — initially decided to establish the museum in the 1960s, Nimitz was still alive.

“He said ‘no’ multiples times,” Cartier explains. “It took a lot of cajoling to convince him. Nimitz specifically stated he would give his blessing to the museum if it didn’t focus on him, but the men and women who participated in the war.”

When the COVID-19 pandemic hit last spring, the museum closed its doors for a few months to re-evaluate.

“We’ve been able to adapt and haven’t had to let anyone go, which is really nice,” Cartier says of the museum’s 35 full-time and 20 part-time staffers. “We didn’t quite make our budget last year, but our staff is dedicated and really believe in the mission. You can see it. They took this on with a ‘we can do it’ mentality reminiscent of the WWII home front.”

He notes that the Smithsonian Affiliation provides professional development resources for museum staffers, too. In addition to taking health precautions — deep cleaning, personal protective equipment supplies, and limited, timed admission — Cartier says that NMPW has quadrupled its digital output and outreach. Virtual tour offerings have taken off nationwide. And the museum recently hosted “field trips” for children in Ghana and Japan.

For those able to visit in-person — ahem, Houstonians — there are two must-see attractions.

“One of the coolest things that everyone talks about is an HA. 19 Japanese midget submarine,” Cartier shares. “It’s extremely unique in that it actually participated in the attack on Pearl Harbor. The first Japanese prisoner of war was in there, so it’s a big artifact, but if you look at it you definitely don’t want to be in there.”

His other big recommendation is the helmet of a Japanese pilot. “He got shot down over the Battle of Guadalcanal — the bullet actually hit his goggles and dented them.”

Cartier adds that the pilot stopped by NMPW and donated the artifacts. “He was part of our annual symposium for years. We were able to get all of his stories.”

Come to Fredericksburg for the Smithsonian Affiliated history lessons, stay for the wineries and schnitzel.

Home Videos The WORLD of WINE – Wine News. Cheap wine, tasting notes and cooking with wine The World of Wine – May 2021 … END_OF_DOCUMENT_TOKEN_TO_BE_REPLACED

How to visit Napa Valley on a Budget. In this video Carson and I explain a few ways to enjoy Napa on the cheap. Tip and advice about how to visit Napa … END_OF_DOCUMENT_TOKEN_TO_BE_REPLACED

Home Videos Get To Know Argentina Wine | Wine Folly If you love Malbec, Argentina is your ultimate wine region. But that’s not … END_OF_DOCUMENT_TOKEN_TO_BE_REPLACED