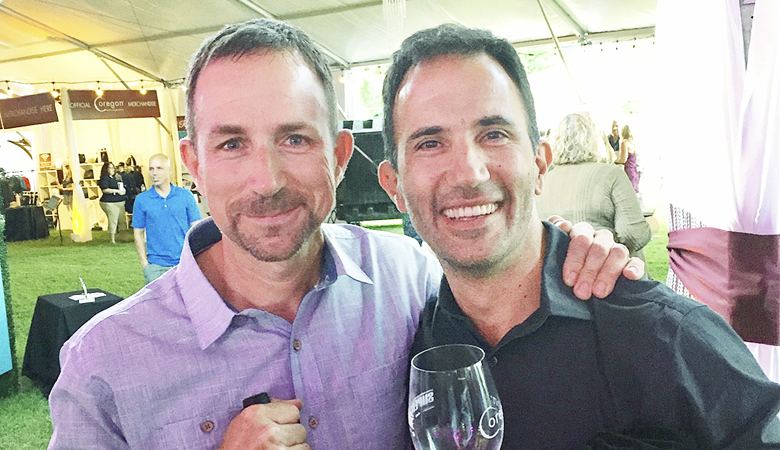 April 17 is World Malbec Day, an entire 24 hours to raise a glass to the full-bodied, inky red that continues to make strides in Oregon.

Although Richard Sommer of HillCrest Vineyard planted the variety as early as 1961, only recently growers have made significant progress in identifying the best clones for their respective soils and micro-climates. This scientific approach has transformed these five valleys into world-class suppliers of big, bold reds, with Malbec in the mix.

Local access to high-quality fruit is a wine windfall for Oregon winemaker JP Valot, a native of Argentina’s Mendoza region, the international epicenter of Malbec. Learning his craft in the shadow of the Andes, Valot brings his knowledge to the southern Willamette Valley, where he’s been head winemaker at Silvan Ridge since 2012, and now owner of his own venture, Valcan Cellars. He sources Malbec from four vineyards: Gold, Rocky Knoll, Ellis and Kelly.

Given his résumé and portfolio, Valot has quickly emerged as Malbec’s local authority.

Valot’s longtime friend in the Rogue Valley, Eric Weisinger of Weisinger Family Winery in Ashland, counts Valot as a major influence in exposing him to the “black wine” of Cahors, Malbec’s birthplace in France.

Thanks to that inspiration, Weisinger produced his first varietal Malbec in 2012. Since then, his Malbecs have earned an array of awards each vintage. His Bordeaux blend containing Malbec remains one of his most popular offerings.

“What I soon realized is how well it grows here,” Weisinger said. His fruit comes from estate grapes and vineyards within four miles. “We have the heat units, the diurnal swing (the difference between the highest and lowest temperatures in one day). The more extreme, the better,” he said. “Heat from afternoon sun spikes sugar development. Cool nights slow down fruit maturation, and that accentuates aromas and natural acidity. It’s ideal.”

Fortunately, a collaboration between Valot and Weisinger is underway. They’re tight-lipped about it right now, but Weisinger added, “It will be worth it. We’re both just beginning to get a glimpse of the possibilities.”

Farther north in the Umpqua Valley, another group of prominent growers and winemakers continue to make a strong case for Malbec. Among them is Stephen Reustle, a transplant from New York who chucked his stellar marketing career to move west with his wife, Gloria. The couple bought 200 acres near Roseburg and transformed it into Reustle-Prayer Rock Vineyards; he says the land reminds him of Burgundy.

Reustle is most known as the first winemaker to produce an American Grüner Veltliner, a white variety he discovered on a motorcycle tour of the Alps in 2001. In addition, he grows and makes 15 reds and whites. One of his favorites remains Malbec. His current vintage, 2018, bursts with tastes of Jolly Rancher red fruit and blueberries, along with warm spice, vanilla and a slightly earthy taste.

“What I’m doing here as winemaker is letting the vineyard speak and allowing the natural fruit of the Malbec grape to come through” he explained. “I don’t want to camouflage what the grape is supposed to taste like.” He indulges the intense fruit character by using mostly neutral oak so the taste doesn’t get sidetracked. “Let the Malbec speak,” Reustle affirmed. His Malbecs have garnered “Best of Class” awards the past four years.

Yet another fertile area for Malbec, especially with its dry, warm summers, is the Walla Walla Valley, where Casey McClellan, founder and winemaker of Seven Hills Winery, was first to introduce the variety to the Oregon side of the appellation in 1999.

Entrenched in local terroir and agriculture, the fourth-generation farmer, born in Oregon City and raised in Walla Walla, Washington, planted his first acre of Malbec cuttings from Earl Jones of Abacela Winery in the Umpqua Valley after experiencing the wine from France and Argentina.

“The big allure for me is the unique sensory properties of Malbec,” McClellan said. “My focus is making it extravagantly aromatic and gentle, and trying to achieve a really polished tannin palate.”

In contrast to bolder versions, McClellan strives to make Malbec “in a style that has gracefulness to it.” He added, “We focus on the fruit, to bring that out and express it to its fullest. Underneath those aromatics in the nose and flavor on the palate, we want a soft, seductive texture that’s silky and pleasing.”

With that tempting description, who wouldn’t want to toast World Malbec Day with one of these winemakers’ creations? Mark your calendars for April 17, and tell your friends, too.

Home Videos The WORLD of WINE – Wine News. Cheap wine, tasting notes and cooking with wine The World of Wine – May 2021 … END_OF_DOCUMENT_TOKEN_TO_BE_REPLACED

How to visit Napa Valley on a Budget. In this video Carson and I explain a few ways to enjoy Napa on the cheap. Tip and advice about how to visit Napa … END_OF_DOCUMENT_TOKEN_TO_BE_REPLACED

Home Videos Get To Know Argentina Wine | Wine Folly If you love Malbec, Argentina is your ultimate wine region. But that’s not … END_OF_DOCUMENT_TOKEN_TO_BE_REPLACED