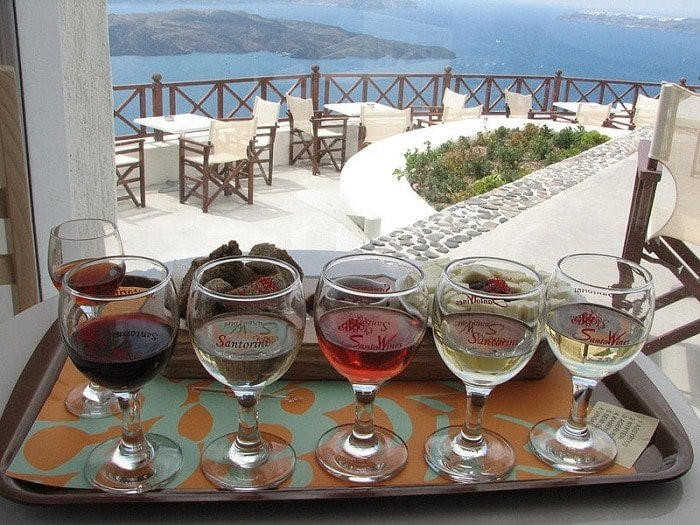 Santorini’s wines are understandably world-famous for their exceptional quality and unique character, while the island’s vineyards are the oldest in Greece, some with trees planted 300 years ago.

The island’s wines owe their unique quality to the volcanic soil of the idyllic isle. The highlights of Santorini’s microclimate are severe droughts, and strong, desiccating winds sweeping over the entire island; however, dense night mists rising from the volcanic caldera provide just the right amount of moisture for the grape crop.

The roots of the grapevines actually receive all of their necessary moisture from the atmosphere, and are truly epiphytic plants which harvest everything they need from the air. They are never watered.

Additionally, the perennial grapevine pest “phylloxera,” common in the Americas and elsewhere in Europe, has never appeared on Santorini, making the harvest even more easily propagated, and thus more profitable.

Santorini vineyard owners have even invented a unique way of pruning vines to protect the grapes from the relentless winds. Still, the yields for Santorini grape harvests are incredibly low, averaging approximately 300–400 kg (661- 881 pounds) per hectare.

Assyrtiko, the finest white wine with the highest acidity and durability, from Santorini’s own grape variety that is not grown anywhere else in Greece, was born here. The Protected Designation of Origin (PDO) wine is made from Assyrtiko grapes in combination with the Athiri and Aidani varieties, also grown on the volcanic island.

Santorini is also known for its production of the sweet “Vinsanto” wine. For the making of Vinsanto, the grapes are first dried in the sun and the wine produced is then aged in oak barrels.

The sweet red wine gets its name from the Venetians, who once sailed all the way to the island to obtain this unique libation. They named it “Vino de Santo,” later shortened to Vinsanto.

Local winemakers have been actively promoting these outstanding wines since after World War II.

Santorini wines are an island treasure

The Union of Santorini Cooperatives, called “SantoWines,” was founded in 1947 to protect and promote this island treasure. Today, it is the island’s largest organization, representing all the vineyard owners, and boasting 1,200 active members.

SantoWines’ mission statement is not only to safeguard the local traditional cultivation processes and to produce the highest quality PDO Santorini wines and products but also to promote sustainable agricultural development.

SantoWines’ Research and Development department invests in the ongoing development of cultivation and vinification techniques, while it aims at the preservation of biodiversity through the operation of a nursery of autochthonous varieties, a solid base for study and trial cultivation of local grapes.

According to Santo President Markos Kafouros, Santorini wines are exported to several countries, with the most important being the US market, and New York in particular.

Kafouros notes that the production center of Santo Wines is visited by 400,000 wine-lovers every year.

These fortunate visitors are given the opportunity to visit the vineyards, taste the wines and learn all about the unique production processes, while at the same time enjoying the hospitality of the local people and the stunning beauty of the island.

Home Videos The WORLD of WINE – Wine News. Cheap wine, tasting notes and cooking with wine The World of Wine – May 2021 … END_OF_DOCUMENT_TOKEN_TO_BE_REPLACED

How to visit Napa Valley on a Budget. In this video Carson and I explain a few ways to enjoy Napa on the cheap. Tip and advice about how to visit Napa … END_OF_DOCUMENT_TOKEN_TO_BE_REPLACED

Home Videos Get To Know Argentina Wine | Wine Folly If you love Malbec, Argentina is your ultimate wine region. But that’s not … END_OF_DOCUMENT_TOKEN_TO_BE_REPLACED