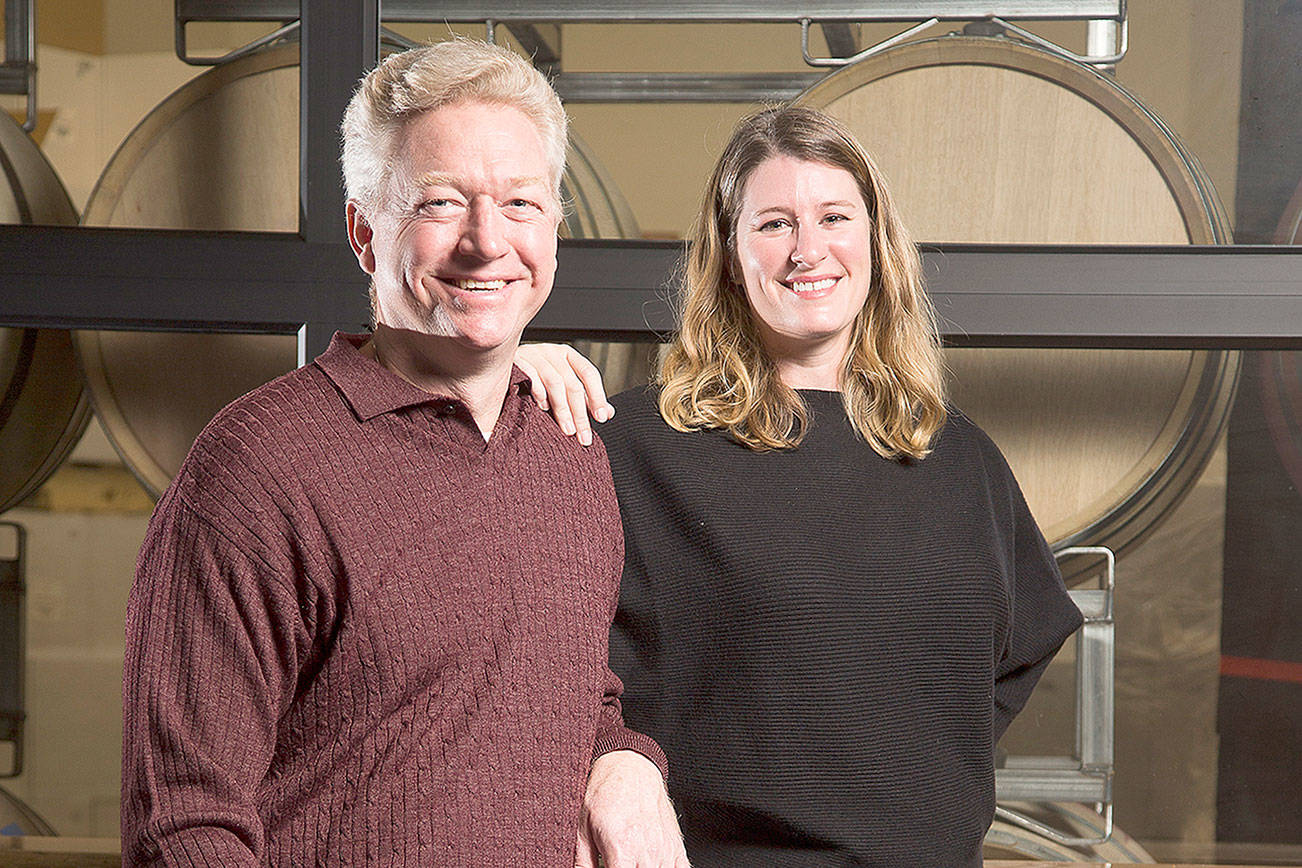 It was crisis time in the Bayernmoor Cellars vineyard in the foothills northeast of Stanwood.

Half of the pinot noir grapes growing in Larry and Kim Harris’ vineyard last year hadn’t finished ripening by the first freeze in late October.

After a cooler than average year, the Harrises rushed to save the 2020 vintage before a cold snap hit. They typically harvest half of the grapes, wait two weeks, then harvest the other half. Last year, they harvested all 4 tons in just six hours.

“We were hoping to let them stay on the vine longer, and continue to ripen into late October, but then the weather shifted,” Larry Harris said. “We were going to get temperatures down in the 20s, so we decided to go ahead and harvest before they were ready.”

The award-winning Bayernmoor Cellars sits on more than 100 acres of family-owned property near the Pilchuck Glass School, just south of the Skagit County line. In addition to pinot noir made from grapes grown on the premises, Bayernmoor makes cabernet sauvignon, chardonnay and rose with grapes from top vineyards in Eastern Washington.

What makes Bayernmoor Cellars stand apart is that it’s one of, if not the only, winery in Snohomish County with an estate vineyard — meaning they grow their own wine grapes.

Most Western Washington wineries ferment grapes grown east of the Cascades, as most of the fruit prefers a warm, dry climate.

Bayernmoor’s vineyard grows 6 acres of pinot noir on a southern-facing hillside selected for its sun exposure and soil composition.

Why pinot noir? It turns out that the climates of Puget Sound and Burgundy, France, are strikingly similar. They have about the same average monthly temperature and average monthly rainfall. The growing season is April 1 through Oct. 31.

“Our climate lines up pretty well with the climate of Burgundy,” Larry Harris said, adding that the French region is synonymous with pinot noir. “Pinot noir likes a cooler climate.”

Those 100 acres near Stanwood hold a lot of history. The building that houses Bayernmoor Cellars? It’s been a barn, a family home and now is a state-of-the-art winery.

In 1988, Jim and Kate Beisecker — Kim Harris’ parents — purchased the land from a dairy farmer. They renamed it Bayernmoor Farm, built a home and raised a family there. The original farmhouse and barn still stand on the property.

The name Bayernmoor pays homage to the family’s German and Dutch roots. It seemed to fit the winery as much as the farm.

“After Larry and I got married, the family started talking about what we’d like to do with the property,” Kim Harris said. “We wanted to put the land to work, because up until then it was just our home. We had horses off and on, but we hadn’t grown any crops.”

But what to grow? The Harrises were the ones to suggest a vineyard. After they both graduated from Santa Clara Law School, Larry and Kim enjoyed wine tasting and touring in California’s Napa and Sonoma valleys. The Beiseckers were sold on the idea.

“None of us was excited about typical agriculture like corn or wheat,” Larry Harris said.

“And wine wasn’t such a far-off dream,” Kim Harris said. “My parents love wine, especially my father, and we love it as well.”

In 2010, the Harrises teamed up with Washington State University’s Skagit County Extension to determine which grapes would grow near Stanwood.

“We wanted to do a red — and pinot noir is one you can grow over here on the west side of the mountains,” Larry Harris said. “They helped us pick out two different varietals of pinot noir clones — precoce and 777.”

Precoce is often referred to as a clone, but technically it isn’t one. Precoce is a mutation of pinot noir that is thought to have occurred in Germany in the 15th century. Also known as pinot Madeleine or fruhburgunder, the mutated grape ripens two weeks sooner. Which explains the Harrises’ harvesting schedule of half now, half later.

Clone 777 is perhaps the most famous of clones cultivated in France in the 20th century. It’s one of the “Dijon clones,” named after the French town in Burgundy.

After transplanting pinot noir vines to the farm, the Harrises moved from Snoqualmie to Bayernmoor in 2012. All three generations of the family live in the house the Beiseckers built in 1997. Larry and Kim have two daughters — Maddie, 16, and Sophie, 13 — who help their grandparents tend to the horses and gardens.

An attorney, Larry, 47, is the founder and owner of Athorus, a patent law firm with offices at Bayernmoor Farms. A former attorney herself, Kim, 45, manages Bayernmoor Cellars’ tasting rooms. One tasting room is at the winery; another is scheduled to open in Woodinville in May.

In 2017, the Harrises hired one of the top winemakers in Washington to make Bayernmoor Cellars wines. Brian Carter of Brian Carter Cellars was twice named Winemaker of the Year by Washington Magazine and is the only three-time recipient of the Pacific Northwest Enological Society’s Grand Prize.

After making Bayernmoor’s pinot noir for three years, Carter is now the winery’s consultant on that grape. He has been training the Harrises in harvesting, crushing and pressing, fermentation, clarification, aging and bottling. He visits the Stanwood-area winery a few times a year to check in.

“Pinot noir is a very demanding grape,” said Carter, who maintains his role as the executive winemaker for all other Bayernmoor varieties. “It doesn’t tend to do well in warmer climates, so there’s almost no pinot noir from Eastern Washington grapes. I’ve tasted a few over the years — there have been very few — and most of them haven’t been very good.”

Carter’s tutelage has helped the Harrises make the transition from suburban to country life.

The Harrises’ daughters, Maddie and Sophie, help in the vineyard whenever needed. They put nets over the vines to keep birds from eating the crops. They weed for mustard seed so it doesn’t take over the grapevines. They also harvest the grapes when it’s time.

“It’s the one day we let them skip school to help with the harvest,” Larry Harris said.

The Harrises don’t expect Bayernmoor Cellars to turn a profit for another three years. By then, they project they’ll have the funding to expand operations. They plan to add a third variety of pinot noir — clone 667, another from the Dijon series — at that time.

It will help when the building housing their winery is finished. They’re in the middle of putting in the infrastructure needed to do all of their winemaking on the estate.

“We’re bringing more and more of the fruit that we purchase from Eastern Washington here to be processed,” Larry Harris said. “What doesn’t come here now goes down to Brian’s place in Woodinville. He makes our wines there for us under his license.”

The winery is also where the Harrises plan to hold private wine tastings for wine club members.

But the draw will be their Woodinville tasting room, scheduled to open in May in Woodin Creek Village, 17255 135th Ave. NE. The new 1,700-square-foot space will feature a bar, lounge, dining room and patio. Bayernmoor Cellars wines will be paired with a menu created by Chris Weber, the head chef at The Herbfarm in Woodinville.

The Harrises will never forget that first sip of their estate pinot noir. It was a 2017 vintage.

“I knew we were on to something special because it reminded me of the Burgundy taste of pinot noir,” Larry Harris said. “I was like, ‘This is what we want, this is what we are after.’ It has the profiles of the classic Old World Burgundy wine flavors that you typically don’t see in wines made in Oregon and California.”

The 2020 vintage was a different story. Since half of the pinot noir harvested last year wasn’t as ripe as they’d like — it was the clone 777 that needed more time — those grapes will be made into sparkling wine at Oregon’s Hood River Vineyards. Bayernmoor has never made a sparkling wine before.

“They’ve had to pivot and make a sparkling wine because it wouldn’t be a very interesting red wine,” Carter said. “It would be too pale and not have a lot of character to it. Sparkling wine is usually picked at lower sugar, anyway.”

“If they have a cooler vintage this year, like they did in 2020, then they’ll have a backup plan,” he added.

Bayernmoor Cellars isn’t just a winery to owners and operators Larry and Kim Harris — it’s a family legacy. They hope to pass the winery and vineyard on from generation to generation.

“Hopefully, we’ll establish something that can survive for several generations,” Larry Harris said. “Not just through us, but through our kids, and through their kids.”

Bayernmoor Cellars, 125 316th St. NE, Stanwood, is open by appointment only due to COVID-19. Call 360-209-6441 or email contact@bayernmoor.com to make a reservation. Go to bayernmoor.com for more information.

This article is featured in the spring issue of Washington North Coast Magazine, a supplement of The Daily Herald. Explore Snohomish and Island counties with each quarterly magazine. Each issue is $3.99. Subscribe to receive all four editions for $14 per year. Call 425-339-3200 or go to www.washingtonnorthcoast.com for more information.

Kim and Larry Harris do a barrel tasting. They moved to Bayernmoor Farms, the family compound, in 2012. (Andy Bronson / The Herald)

Home Videos The WORLD of WINE – Wine News. Cheap wine, tasting notes and cooking with wine The World of Wine – May 2021 … END_OF_DOCUMENT_TOKEN_TO_BE_REPLACED

How to visit Napa Valley on a Budget. In this video Carson and I explain a few ways to enjoy Napa on the cheap. Tip and advice about how to visit Napa … END_OF_DOCUMENT_TOKEN_TO_BE_REPLACED

Home Videos Get To Know Argentina Wine | Wine Folly If you love Malbec, Argentina is your ultimate wine region. But that’s not … END_OF_DOCUMENT_TOKEN_TO_BE_REPLACED