A woman has sparked debate after admitting she doesn’t want to hang out with her friend’s son, although she wants to bring him to all social events.

It’s great being pregnant at the same time as your best friend. You get to experience everything together, then you have kids together, which means play dates and exchanges of babysitting.

But what happens when your bestie has a baby and you’re really not that into kids?

One woman has sparked debate on Reddit after writing a post about her mum friend who always brings her child along to everything. She brought him to art class. Source: iStock.

RELATED: BFFs: When you don’t like your child’s friends

“I have no interest in kids, I’m that ‘aunt” who shows up at their birthday parties, Christmas, and other big events,” the woman wrote in her post to Reddit. “Other than that when I hang out with my friends I prefer it be a child-free event.”

She went on to say that there had been a few occasions recently where her friend “Kayla” had brought her son along, assuming the pair came as a package deal. The first came about when the pair had organised to do an art class together but Kayla’s childcare fell through at the last moment.

“She switched days with her son’s father so her son ‘Ryan’ could go with us,” she said. “I didn’t want to make it a big deal so I just said OK and went with it.”

The next time, Kayla just turned up with her son and went on to suggest they should have invited their other friends with kids.

“The next time Kayla wanted to join in on my plans it was on a hike,” she said.

“This time she didn’t ask, but just brought Ryan along and was talking about how she wished she invited our other friends and their kids. I told her this was not going to become a mommy and me thing and they can keep that on their ‘Friday night dinners’, where each week they all meet up and cook and hang out with the kids.”

Then there was a wine tasting event where the woman was upfront with Kayla and asked her not to bring her son. They had an argument and Kayla didn’t end up going at all.

Now the friends are speaking again, but the woman had made plans to go to the zoo with another childless friend, which offended Kayla.

She wrote, “Kayla got so offended that I didn’t invite her and Ryan because Ryan has been wanting to go to the zoo. We got into it again.”

The woman reasoned that Kayla can go to the zoo anytime she likes, but she said her other mum friends never want to do anything that costs too much money. The mutual friend agrees with Kayla saying she should “just suck it up and let kids come” but the woman says she should have to deal with kids if she doesn’t want to.

“Now I’ve been uninvited to Ryan’s 6th birthday and to be fair I’m kind of happy about that,” she added.

RELATED: ‘I want to use my late best friend’s sperm’ 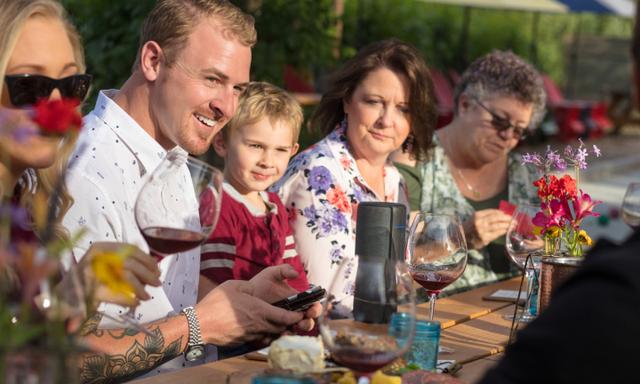 She expected him to tag along to the wintery. Source: iStock.

RELATED: ‘The sickening act that convinced me my friend’s kid is a psychopath’

To become child-friendly or not

The internet was a little mixed on this one, however, most people agreed that Kayla should respect the woman’s boundaries.

“You’ve made it very clear you’re not interested in being around kids,” commented one person. “It’s up to her whether she decides to respect that or f**k off.”

Another added, “It’s also very petty to uninvite OP from the birthday party. She’s not punishing OP, the only one she’s punishing is her kid who won’t see his aunt and get a present. And I mean… who on earth brings a kid to a wine tasting event? Seriously.”

A few suggested it should be determined according to each activity.

“I feel like it kind of comes down to each event, and how the kid generally behaves. Like the painting thing, the kid might not have been much of a nuisance, but for a hike or a wine tasting I’m 100 percent in the boat of leave the kid home. The zoo though, just let the kid come to the zoo.”

And one pointed out the woman most likely needs to make a choice: “It’s clear by now that if you want to hang out with her, that includes her kid. You have to decide whether to have the kid at most events too or end the friendship at this point.”

What do you think?

Home Videos The WORLD of WINE – Wine News. Cheap wine, tasting notes and cooking with wine The World of Wine – May 2021 … END_OF_DOCUMENT_TOKEN_TO_BE_REPLACED

How to visit Napa Valley on a Budget. In this video Carson and I explain a few ways to enjoy Napa on the cheap. Tip and advice about how to visit Napa … END_OF_DOCUMENT_TOKEN_TO_BE_REPLACED

Home Videos Get To Know Argentina Wine | Wine Folly If you love Malbec, Argentina is your ultimate wine region. But that’s not … END_OF_DOCUMENT_TOKEN_TO_BE_REPLACED