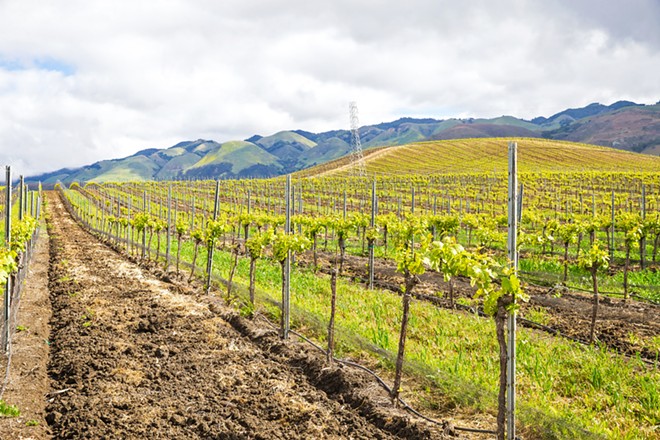 Winemaker Jean-Pierre Wolff says the bees and other pollinators love the drought resistant and diverse flower garden surrounding the tasting area. As he looks out across his vineyard, he talks about the drought San Luis Obispo County never really left—as of April 30, his property in the Edna Valley had received 9 1/2 inches of rain. In an average year, he gets 22 inches.

“I’ve got to talk nicely to [the vines] this year and say, ‘You’re not going to get all the water you want to this year,'” Wolff says with a wry smile.

Beyond that, he adds, there’s also been less fog than is typically the case. He knows this because an experimental weather station stands more than 30 feet tall about 150 yards from us. In collaboration with the UC Extension, the station samples the weather every 15 minutes and records everything from temperature to wind speeds, humidity, and solar radiation, among other things.

In 2021, he says, his practices will be different than they would be during something like an El Niño year or even a normal year. They have to be, which is why he doesn’t like terms such as “best management practices,” which often come with sustainability certifications. It sounds too cookie-cutter.

“I view myself as a climate resilient farmer,” Wolff says. “It’s adaptive.”

“It’s not like I got up in the middle of the night one day and had an ‘aha’ moment; it was more progressive,” he says.

When he and his wife purchased the property 21 years ago, it was farmed conventionally—the previous owners nuked the vineyard with pesticide, tried to manage the creek at the property’s edge so it was as unobtrusive as possible to the farming side of things. 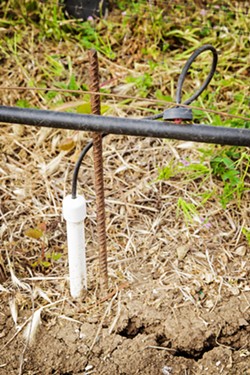 “We drink the water, we breathe the air, we wanted to have a healthy lifestyle,” he says, adding that he and his wife also live on the property. “I thought we can really work long-term with being more in harmony with nature. The more I got involved, the more I research and read, attended seminars. … It sort of snowballed in having an increased level of commitment and trying to raise the bar increasingly.”

His goals were to increase both the quality and quantity of water on his property and work in harmony with nature to produce his chardonnay, pinot noir, teroldego, syrah, petit sirah, and riesling —doing things like depending on integrated pest management, rather than pesticides, to deal with detrimental bugs.

Twenty years ago, not a lot of people were talking about climate change, and water conservation wasn’t quite an issue yet, but he says he got involved with the Cal Poly Center for Sustainability. With his background in agricultural, nuclear, and electrical power engineering and a Ph.D. in science and technology, his desire to learn runs deep.

The more he learned about sustainability and farming with nature instead of against it, the more he realized how little he knew, the more he wanted to learn.

That thirst for knowledge is evident in the way he approaches water on his property. Wolff describes it as a three-legged stool that includes conservation, augmentation, and innovation. Farmers need to be smart with how they irrigate their crops, he says, and not do things like use an overhead sprinkler in the middle of a 90-degree day when it’s windy outside—”but conservation alone isn’t going to get the basins in balance.”

About 10 years ago, Gov. Arnold Schwarzenegger appointed Wolff to serve on the Central Coast Regional Water Quality Control Board, so Wolff is intimately aware of the Central Coast’s struggle with getting overdrafted groundwater basins into balance as well as the issues facing farmers who need to water their crops.

As he talks about stormwater capture to augment his water supply on the vineyard, he’s momentarily distracted by a mower cutting the grass along the road on a nearby hill.

“It’s set way too low, so it’s hitting a lot of soil,” he says, which concerns him because it leads to erosion as well as disturbs the top soil, which can keep moisture and carbon in the ground if left undisturbed.

Wolff Vineyards has two valleys, and the roads and vineyards on the hilly property are designed to help guide stormwater runoff into the lower fields, like a rice paddy, he says. The water travels from block to block as it makes its way to the creek and soaks back into the aquifer, reducing the amount of irrigation he needs to provide to those vines. 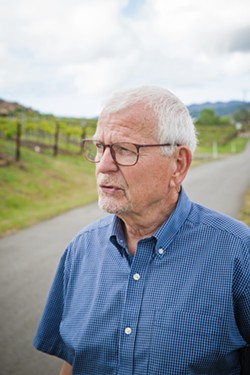 As far as innovation is concerned, Wolff developed a sub-surface precision drip irrigation system. It delivers water to each vine via drip tube 3 feet below ground.

“This eliminates evaporation, which is an important component of vines’ water losses due to evaporation and transpiration,” he told me via email prior to our meeting. “The 2020 harvest produced the same tonnage [as] conventional irrigation with half the water use.”

So far, the winery has retrofitted more than 8,000 vines as part of a replant program. Pointing to a drip line snaking into the dirt, he says the rootstock of these newer vines starts much lower (at 3 feet below the surface) than a conventional vine. Delivering water deeper into the ground prevents weeds on the surface, which compete with vines for water and nutrients, and enables the soil to retain more moisture than it would otherwise.

With tropical fruits on the nose and a nuttiness to the finish, the chardonnay is a deep golden color and has what Wolff describes as “the typical Edna Valley creaminess.” It’s creamy without the butter that aggressively oaked chardonnay tends to have. Wolff sees sustainability as an ongoing project, one that technology, education, and experimentation can only improve upon. The Wolffs have worked hard to restore the two creeks on their property and nudge wildlife back into existence. To prevent erosion by planting cover crops and maintain carbon sequestration by using a special plow (yeoman) that only minimally disturbs the soil. The winery is equipped with a roof that opens at night to bring cool air into the building, reducing its reliance on a cooling system. And there’s so much more.

“These are all aspects that need to be integrated with farming,” he says. “It’s all interconnected, plus it makes me sleep well at night.” Δ

Home Videos The WORLD of WINE – Wine News. Cheap wine, tasting notes and cooking with wine The World of Wine – May 2021 … END_OF_DOCUMENT_TOKEN_TO_BE_REPLACED

How to visit Napa Valley on a Budget. In this video Carson and I explain a few ways to enjoy Napa on the cheap. Tip and advice about how to visit Napa … END_OF_DOCUMENT_TOKEN_TO_BE_REPLACED

Home Videos Get To Know Argentina Wine | Wine Folly If you love Malbec, Argentina is your ultimate wine region. But that’s not … END_OF_DOCUMENT_TOKEN_TO_BE_REPLACED