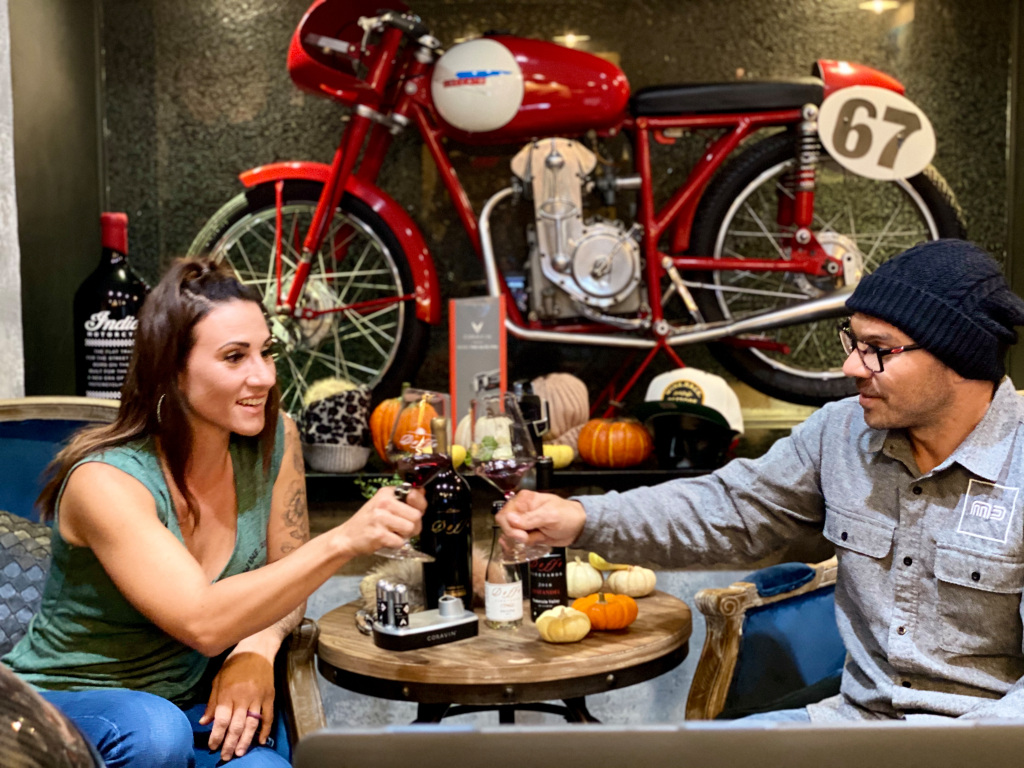 Traveling down vineyard-flanked country roads leading to rustic-looking wineries with barrels stacked to the ceiling has long been a hallmark of traditional wine tasting.

But amid a pandemic when restrictions for visitors remain prevalent, wineries have embraced services that bring the tasting room to the living room.

In the Temecula Valley, many wineries have turned to videoconferencing to conduct tastings throughout the novel coronavirus pandemic.  As winery owners have refined their virtual programming and found ways to better engage with their audience, some say online tastings are here to stay.

A reaction to the pandemic

“It was just kind of a reaction to that,” he said. “How do we engage with our customers? How do we stay relevant? I think that’s the biggest thing is to stay in front of your public and let them know what’s going on.”

So he started doing Facebook Live videos and received an immediate positive response, with about 100 views during the tasting livestreams and 1,500-2,000 views afterward.

Originally, the tastings were pretty loose in their format. Guests were encouraged to grab a glass of wine and sit back as Damian and other Doffo family members took them through their offerings, but the streaming events have since evolved to be centered around specific wine bundles.

The tastings take place Wednesdays with Damian Doffo leading the tasting from 5:30-6:30 p.m., with various family members joining him, including his sister Brigitte. Another sister, Samantha, leads an online happy hour after the tasting where she brings on guests to chat with and shares food recipes and ones for drinks made with Doffo’s sparkling wines and grappa.

The happy hour started as a way to have fun and socialize with the wine left over from the educational portion of the program.

Damian Doffo said he’s heard from people who center their Wednesday nights around the events, putting the online tasting up on a big screen as they nosh on charcuterie and sip wine.

“To engage virtually was a cool experience and something that we realize we can’t stop doing now,” he said.

Walter Carter, director of hospitality for Danza del Sol Winery and sister property Masia de la Vinya Winery, said the wineries also plan to continue doing virtual tastings beyond the pandemic. Virtual tastings will be part of the training for some new employees, too.

Carter said that many of the wineries’ members are from other parts of the country such as Wisconsin, Florida and New York. He said a frequent comment from those out of state members has been that they wish they could make it out more often or that there was a way that they could keep up with what the winery was doing.

“We’ve always talked about creating some sort of virtual club,” Carter said. “That was always something that was kind of right there; we just couldn’t figure out how to roll it out.”

Carter said the virtual tastings that Danza Del Sol and Masia De La Vinya are doing may have been born out of the pandemic, but they also provided the opportunity to reach guests out of the area.

He said that the winery started out by doing Instagram Live videos in April 2020, partnering with local businesses such as charcuterie maker Grazing Theory to do wine and cheese tastings. However, not everyone could attend virtually, so the winery also started offering private zoom tastings where a member could email the winery with a time and day, how many people were in their tasting group, and the number of bottles they would need.

Carter said a 7-10 day lead time is needed to ship bottles and then he or another staff member will take guests through a tasting, usually for about an hour, and talk about topics such as the history of Temecula and what happened during the growing season for a particular varietal.

Tying in tastings with winery updates

The winery first started doing them not long after the first stay-at-home order, but put them on pause before picking them back up in January.

Joseph Wiens, winemaker for Wiens Family Cellars, said the tastings happen on Facebook Live weekly on Fridays at 5:30 p.m. and are usually tied in with some sort of sale or the arrival of a new product.

The winery recently started carrying bottles from Wiens’ Otra Cosa label while the Otra Cosa tasting room off Diaz Road remains closed and one of the virtual live tastings was dedicated to some of those wines.

During a more recent virtual tasting, Wiens showed off the Wiens Family Cellar’s sampler three packs, which were half-size bottles of upcoming wines that people were able to order before they became available at the tasting room.

Wiens said that reception to the streaming events has been good, with high viewership that’s translated to more people picking up bottles from the tasting room and allows for more engagement.

“It’s kind of fun for them to interact with the winemaker,” Wiens said. “A lot of times I’m busy in the back so I don’t have a lot of time to talk one-on-one and answer questions from our customers so it’s really fun for me to be there to answer all the fun technical questions they have about oak barrels or different varieties.”

And though the winery has reopened for outdoor tastings, there are no immediate plans to stop the online version.

“As long as we continue to have good viewership we’ll continue doing them,” Wiens said. “It’s kind of a fun thing for us. There are no plans to wind them down anytime soon.”

Where to watch virtual tastings

Home Videos The WORLD of WINE – Wine News. Cheap wine, tasting notes and cooking with wine The World of Wine – May 2021 … END_OF_DOCUMENT_TOKEN_TO_BE_REPLACED

How to visit Napa Valley on a Budget. In this video Carson and I explain a few ways to enjoy Napa on the cheap. Tip and advice about how to visit Napa … END_OF_DOCUMENT_TOKEN_TO_BE_REPLACED

Home Videos Get To Know Argentina Wine | Wine Folly If you love Malbec, Argentina is your ultimate wine region. But that’s not … END_OF_DOCUMENT_TOKEN_TO_BE_REPLACED