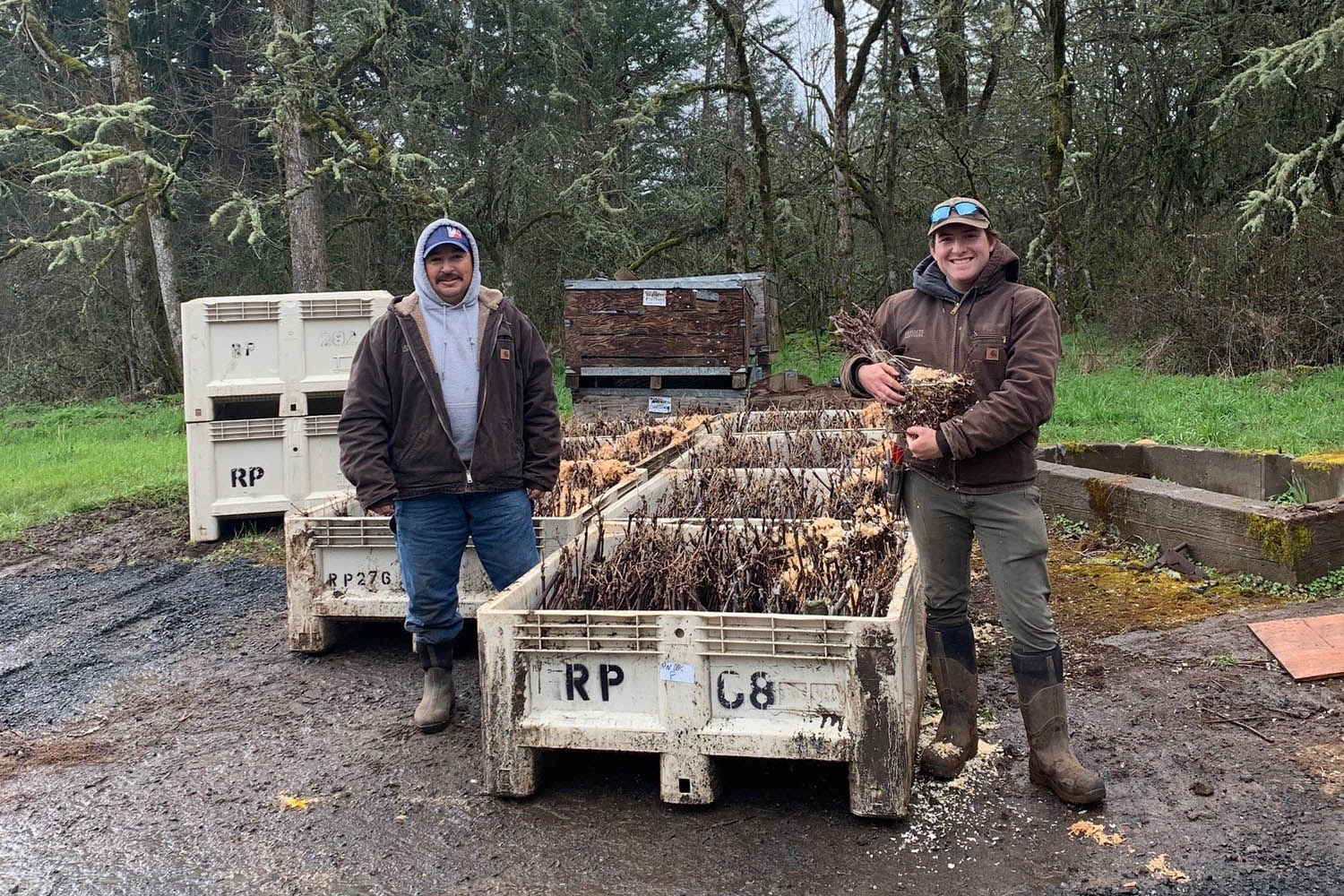 Wine is a global commodity, but does it make for a better product when everything is locally sourced?

The history of wine-grape cultivation dates to at least 6,000 B.C., and it’s deeply intertwined with the development of civilizations, empires and global trade. Grapes are planted on every continent except Antarctica, and producers craft bottlings from grape varieties indigenous to regions across the planet.

But increasingly, winemakers try to source ingredients from closer to home in a bid, they say, to create more authentic and delicious wines. Their reasons are many, and range from concerns over the spread of pests and disease, to logistics and a desire to develop their region’s terroir.

“Diseases don’t understand boundaries and state lines,” says Marc Fuchs, a professor at the School of Integrative Plant Science at Cornell University. “We learned that lesson with Covid. Quarantines help, but viruses and diseases can slip through. Some manifest themselves in different ways, depending on weather conditions.”

Fuchs notes how crown gall, a disease that causes tumor-like growths on grapevines, can transmit between plants in the vineyard. It can ultimately lead to vine death, he adds, and “is a much more serious problem in cool climates, like the Finger Lakes. It can arrive from warmer climates with no symptoms, and then develop during cold snaps.”

Nurseries go out of their way to keep their plant material clean and free of viruses. The USDA’s Animal and Plant Health Inspection Service has quarantine and lab-testing protocols in place. Similar measures are imposed by states like California, Missouri, New York, Oregon and Washington.

In California, 22 nurseries are enrolled in the state certification program that confirm that vines are free of significant grape pathogens. Other states, like Michigan, have launched virus and pest analysis programs.

But for many, these measures aren’t enough of a guarantee.

“We do see viruses coming in from out of state,” says Leigh Bartholomew, the director of viticulture at Results Partners, which works with wineries in the Willamette Valley, Southern Oregon and Washington’s Columbia Valley. “It’s impossible to be virus free, even if they’re certified. It’s like antibacterial soap, there will always be something there. Still, we do work with nurseries from out of state if they have rootstock or [varietal grapes] we want, and we institute a strict quarantine program where they are grown far away from other vineyards at first until we are reasonably sure they’re virus-free. It’s not a perfect, closed system, though.”

For others, the decision to use local nurseries is about logistics and meeting the specific needs of their terroir.

The perils of sourcing from afar can be illustrated by a vines-in-pots snafu over at Red Newt Cellars in New York’s Finger Lakes.

“We purchased thousands of vines that were certified virus-free from California, and they showed up in individual pots,” says Red Newt’s winemaker, Kelby James Russell. “I couldn’t believe it. We had to call in extra workers, dig holes and plant them right away to prevent early budding.

“We missed the ordering window at our local nurseries, which is why we sourced from them, but there’s no way that would have happened if it had been a nursery we had a personal relationship with. They would have caught the error we made ordering online and called us to discuss.”

A personal relationship with suppliers can smooth many wrinkles, but climate also comes into play when East Coast wineries source from California.

“We found that vines from California are too long for us in the Finger Lakes, because here, we have to bury vines to insulate them from the cold in the winter,” says Scott Osborn, owner of Fox Run Vineyards. “When we ordered from California, we had to get special equipment to drill down deeper into the soil to properly bury vines. We also found that occasionally we’d get vines that already had buds on them when they arrived. If we plant vines with buds and then get a frost, that’s a big problem.”

Russell also notes that rootstock and vines propagated out of state just don’t have the “winter hardiness” he seeks.

“We had a Riesling clone from Washington that wasn’t available in New York, but it didn’t perform as expected, and the vines were killed by the terrible winter in 2015,” he says. “We’ve replaced it with the same clone that a local nursery started growing, and it’s thriving.”

There’s also some mystery to the exact manner in which terroir works. Russell and others see sourcing local as a way to work within their region’s unique climate, but also to create a product that offers a higher level of purity and transparency.

For Richie Pisacano, the vineyard manager at Wölffer Estate in Long Island, the goal is to think globally, but source locally.

“Today, with so many new clones and the presence of vineyard-debilitating viruses, the process of plant sourcing has become in some ways more difficult,” says Pisacano. “I look for clones that I believe will suit our micro-terroir best. They may originate from anywhere in the world, but I prefer them to be propagated as nearby as possible.”

Winemakers also see an opportunity to shape the future of their regions through unofficial, but highly effective, partnerships with local nurseries on experimental plantings.

“There’s a real synergy here between growers and nurseries,” says Russell. “We’re always running into each other and spitballing ideas, brainstorming. I’ll get excited about Gamay Noir, and they’ll work on finding a clone that will work here and propagating it in their nursery.

“Right now, we have a new half-acre of Scheurebe in the ground from Double A Vineyards. That came from a speculative listing and conversation. Our first commercial vintage will be in 2022, maybe 150 cases, but we think it may have a future here, and not just for us.”

Bartholomew is also eager to expand Oregon’s repertoire. She’s currently in the middle of a multiyear trial.

“There are really only three rootstocks widely used in Oregon,” she says. “And that’s not enough. We are partnering with Oregon State University [OSU], and working with 18 rootstocks on one Riesling clone. Several other winegrowers are in on it, too. They give us the vines, OSU helped with the planting and layout of the block, and we’re gathering samples to test crop load, ripening variables and other parameters.”

Ultimately the growers hope to learn how different rootstocks could help them craft better wines by creating vines more resistant to climate change.

In the end, to exert absolute control over terroir is an impossibility. Winemakers can only strive to nudge things in a desired direction. Locally propagated clones and rootstock is just one way for producers to utilize an ever-growing network of nurseries across the country and bring out wine’s true character.

Home Videos The WORLD of WINE – Wine News. Cheap wine, tasting notes and cooking with wine The World of Wine – May 2021 … END_OF_DOCUMENT_TOKEN_TO_BE_REPLACED

How to visit Napa Valley on a Budget. In this video Carson and I explain a few ways to enjoy Napa on the cheap. Tip and advice about how to visit Napa … END_OF_DOCUMENT_TOKEN_TO_BE_REPLACED

Home Videos Get To Know Argentina Wine | Wine Folly If you love Malbec, Argentina is your ultimate wine region. But that’s not … END_OF_DOCUMENT_TOKEN_TO_BE_REPLACED