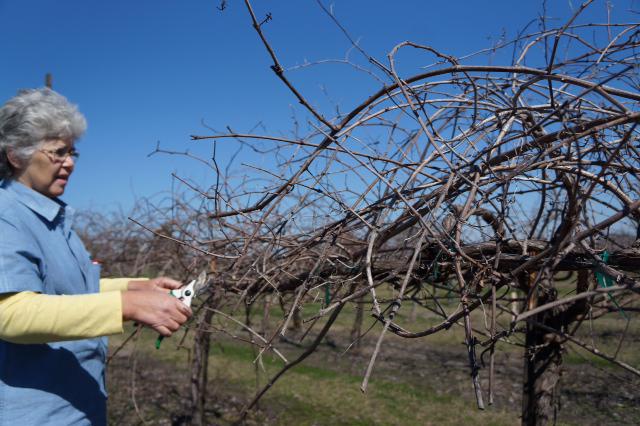 Vineyards in the Northern Hemisphere are going through a rest. Grapes were harvested and leaves have fallen off the vines, making vineyards look like they are sleeping. The vines’ long canes have buds for this spring’s bud break of leaves. Established vines have long tap roots, some over 25-feet deep. The younger vines are inching their roots down into the soil, providing water, nutrients, and minerals for the vines. These younger vines are manipulated in the vineyards to focus on establishing a strong roof system. Grapes flowers and grapes are manually removed so these young vines can put their energy into establishing a strong root system and hence foundation for the individual vines. Normally, vineyards wait for three years before harvesting fruit from the vines in order to establish strong foundations. These root systems are the basis for establishing vines that can produce quality fruit.

The first four months of each year is when vineyards normally focus on pruning. In cold weather areas like the Texas High Plains and New York state, pruning is delayed as long as possible. If bud break occurs too early in these cold temperature areas, then a rough pruning leaving cane lengths of over a foot will delay the continuing of the bud break in case a freeze arrives late in the spring.

Along the Gulf Coast Region, vines are normally pruned in January and February with bud break occurring in late February and early March. In other areas, vines are trimmed in March and April, and sometimes as late as May due to weather conditions. Vines are trimmed primarily to limit the production of fruit and to train the vines to run on a trellis system for easy harvesting. Vineyard managers normally limit the amount of fruit that is produced on each vine based on the grape varietal, vine age, and prior year’s harvest. The vineyard manager wants quality fruit on his vines in order for the winemakers to produce quality wines. The age and condition of the root system is important in making this decision since the root system is the basis for establishing the limits of how much fruit is produced. The root system will support only a certain number of pounds of grapes in order to produce quality grapes.

If you exceed that limit, the roots will have to distribute its resources over more grapes, hence reducing the essences of the vines to each grape bunch. Normally, a grape bunch develops opposite each leaf bud. Many vineyard managers want no more than four to six buds per shoot and four to six shoots off each arm of the grape vine. Some grape vines are trained to half one arm off its main trunk, some one on each side of the trunk, and some vines as many as two arms on each side of the main vertical trunk. This decision is based on the vineyard manager’s decisions in how he wants his grape crop to evolve. A quality grape crop will get more dollars per tons of grapes vs. an average quality. A vineyard manager always wants more grape bunches on his vines so his vineyard workers can selectively retain the good bunches of grapes and snip off the bad bunches of grapes. This selectivity is based on the vineyard manager’s decisions and the availability of vineyard workers.

Normally, several local vineyards like Bernhardt, Haak and Wild Stallion host pruning seminars and allow visitors to do pruning. This is an opportunity to harvest grape canes to make wreaths or to start new vines. Due to the pandemic, no announcements for these seminars and running have been made yet.

Ron Saikowski may be reached at rsaikowski@comcast.net.

Home Videos The WORLD of WINE – Wine News. Cheap wine, tasting notes and cooking with wine The World of Wine – May 2021 … END_OF_DOCUMENT_TOKEN_TO_BE_REPLACED

How to visit Napa Valley on a Budget. In this video Carson and I explain a few ways to enjoy Napa on the cheap. Tip and advice about how to visit Napa … END_OF_DOCUMENT_TOKEN_TO_BE_REPLACED

Home Videos Get To Know Argentina Wine | Wine Folly If you love Malbec, Argentina is your ultimate wine region. But that’s not … END_OF_DOCUMENT_TOKEN_TO_BE_REPLACED