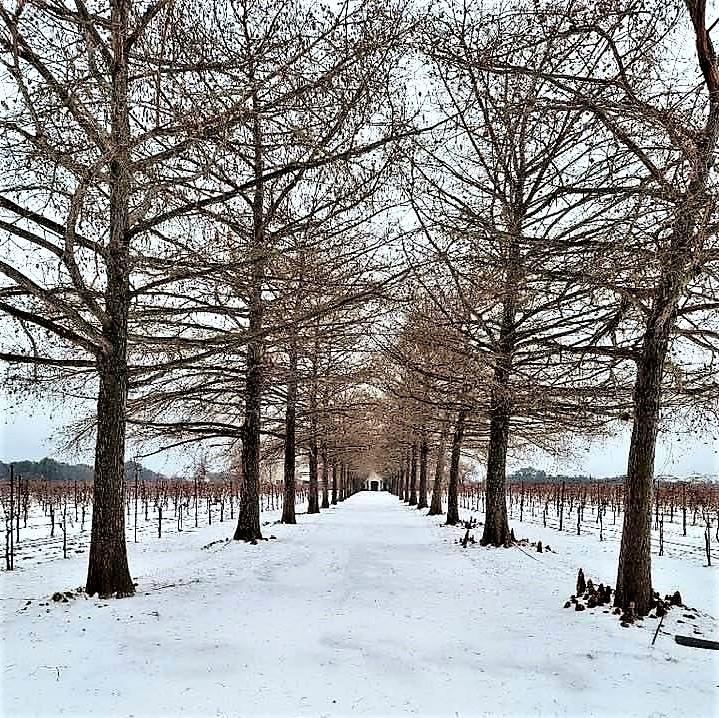 The winter so far this year was warmer than normal in our area until Valentine’s Day when the freeze of 2021 set records and brought devastation to most of our state.

The loss of power and potable water supplies have been devastating followed by burst pipes and extensive water damages to many homes and businesses. Temperatures throughout the grape growing regions in Texas from the Texas High Plains, North Texas, the Texas Hill Country, West Texas, and the Gulf Coast set record lows and lasted for four to six days. The recent record freezes will significantly reduce Texas grape production. Temperatures near zero degrees that were experienced in much of Texas can significantly impact grape vine buds.

My vineyard experts tell me that each grape vine bud has three layers within the visible exterior bud. Most of the primary layers within the bud froze in much of Texas, particularly on the Texas High Plains, North Texas, and the Texas Hill Country. These outer buds provide the grape vines with the best capability to produce grapes. The grapes have two more inner layers within the visible bud. When the outer bud layer is damaged, the inner bud layers respond as backup to the outer layer producing the grapes. However, the inner buds are not as productive as the outer interior of the bud. The result is less pounds of grapes on the vines, but there will be still grapes.

Sergio Cuadro with Fall Creek Vineyards told me, “We know that grapevines are sensitive to freezing temperatures during the growing season, and spring frost frequently damages opening buds and young shoots decimating crops in Texas during some years. Thankfully, the icy temperatures came while grapevines in our Estate Oxbow Vineyard, and other Texas vineyards, are still dormant. Grapevines are naturally ready for freezing temperatures while in dormancy. Mature grapevines may withstand low temperatures up to -20 degrees F, which is colder than we experienced. In fact, grapevines have a sort of “cold hours counter” that prevents them from beginning new growth with bud break at the first warm wave in the middle of the winter. Grapevines need a certain amount of cold hours, or prolonged dormancy and delayed bud break can occur.”

Kirk Williams with Texas Tech University explained to me, “The question now is what will the impact of the extreme February cold event that vineyards endured in mid-February? To answer that we must understand how the grapevine tolerates cold temperatures.

Grapevine buds are slow to acclimate to cold temperatures in the fall and are also quick to deacclimate in the spring. So cold events in the fall, such as the 2019 Halloween freeze event on the High Plains when it was in the low double digits, can cause more damage to grapevines (it caused crop loss, death of cordons, trunks, and sometimes death of the entire grapevine) than a similar event in the winter.

Just a few days of warm weather can really start to deacclimate the grapevines. The three to seven days prior to a freeze event set the stage for what can happen to the grapevine buds and wood. In Fredericksburg, freezing temperatures started on Feb. 12, had a low of 3 degrees on Feb. 17 and did not get above freezing until Feb. 19. Our teaching vineyard in Fredericksburg had a week of highs in the 70s the week prior to the start of the epic freeze event. With that type of weather, I would expect to see some bud damage, depending on the variety, especially in the Hill Country and the Gulf Coast but also on the High Plains. I would also expect to see wood damage due to the length of the freeze event more so in the Hill Country and Gulf Coast areas as they rarely get that cold ever much less a few weeks before bud break.”

Jason Centanni’ with Llano Estacado Winery told me, “While we’ll be able to assess the damage to vines starting in the next week or two, looking for major cracks and splits in the cordon “arms” and trunk, the true scope of the damage will be seen in the early spring when the vines begin their push out of dormancy. At this time, we’ll look for green shoots that emerge on the lower and mid sections of the trunk and not the pruned areas (ie “spurs” along the cordon arms), or no green growth at all which would indicate vine death.

We’ll be visiting our growers as much as we can this spring to help assess damage to the vines, in our blocks especially, and should be able to give some more details in the upcoming months.”

Paul Bonariggo with Messina Hof Winery estimated that the grape crop will be reduced by 60 percent this year. Paul provided me with details on why he believes his estimates were made based on historical recorded information.

In order to properly evaluate the total impact to the 11 billion dollar wine industry in Texas, it will take weeks and months by vineyard managers to view their vineyards, do bug dissections, and inspect the wood of each grape vine.

So far this year, the damaging freezes have hurt the Texas vineyards like the damaging freezes in other parts of the country. All 50 states produce wine with states like Minnesota, Michigan and New York experiencing vine-killing freezes at 20 degrees below zero or lower for extended periods of time. Nothing that bad happened in Texas including the Texas High Plains.

Ron Saikowski may be reached at rsaikowski@comcast.net.

Home Videos The WORLD of WINE – Wine News. Cheap wine, tasting notes and cooking with wine The World of Wine – May 2021 … END_OF_DOCUMENT_TOKEN_TO_BE_REPLACED

How to visit Napa Valley on a Budget. In this video Carson and I explain a few ways to enjoy Napa on the cheap. Tip and advice about how to visit Napa … END_OF_DOCUMENT_TOKEN_TO_BE_REPLACED

Home Videos Get To Know Argentina Wine | Wine Folly If you love Malbec, Argentina is your ultimate wine region. But that’s not … END_OF_DOCUMENT_TOKEN_TO_BE_REPLACED