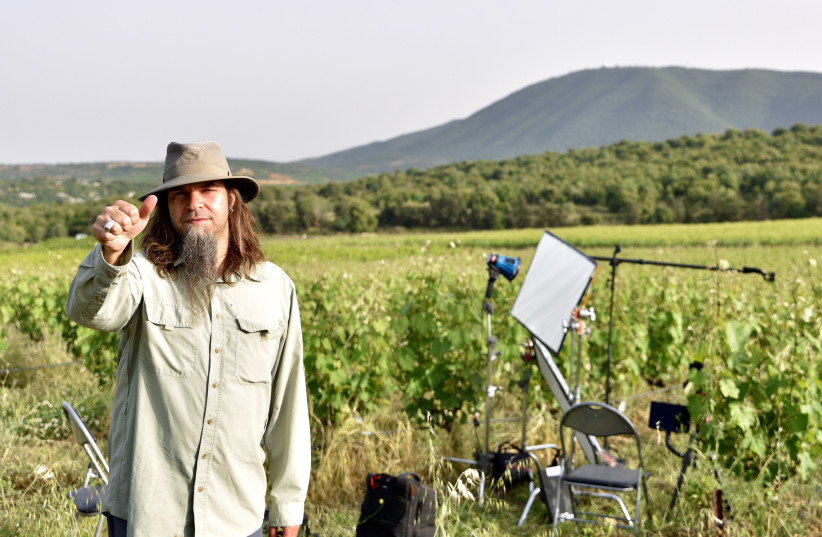 Snow R. Shai started with the idea of making a film about Israeli wine back in 2012. Sometime after that, I met him for the first time and he told me about his embryonic idea. I smiled encouragingly, as one does. I am often the recipient of many grand plans, but who is to know which ugly ducklings turn into swans? I doubted anything would come of it.

Then in 2015 he came and interviewed me in the deep underground cellars at Zichron Ya’acov Winery. After this, Snow was no longer in contact with me and I forgot about it.

Years passed. When I heard the film was still being made, I assumed if it ever saw the light of day, that it would be so out of date, it would not be relevant. In the meantime I read a biography of Leonard Cohen. There was a charming story about him meeting Bob Dylan. Apparently, Cohen asked Dylan how long him it took him to write a particular song. Dylan answered: “Oh, about 15 minutes.” Then Dylan asked Cohen how long it took him to write his iconic song “Hallelujah.” He was embarrassed and said, “Two years” – because the real answer was five years and even then, he could not decide between two versions of the final line. It was fascinating to hear in a nutshell the different approach of these two great singer-songwriter-poets, geniuses both. Leonard Cohen once described the process of writing “like scratching my heart.”

Now, the film Holy Wine has finally been launched. The final result shows that director Shai has the perfectionist trait more in keeping with Leonard Cohen than Bob Dylan. It just took time to get it right. He went on adjusting, chopping and cutting until he was absolutely satisfied. In the end, 300 hours of filming was distilled into 96 minutes! The name Holy Wine for me conjures up images of kiddush wine or altar and communion wine. It also reminds me of Robin in the Batman TV shows, who you may remember, made use of the word “Holy” as a prefix to everything.

Shai has an artistic look, with a mass of long hair and a long pointy beard. He must need a lot of grooming. He looks as though he has come straight from the set of The Hobbit or Lord of the Rings. He has been working in media for more than 20 years and founded Snowdrum Audio Visual in 2004 to make commercials, promos, documentaries, films and music videos. He teaches filmmaking at various academic institutions and schools.

He grew up in a house where music was always playing and picked up his first musical instrument at the age of 12. His father would photograph everyone all the time, filling up numerous photo albums. This implanted in him a love of sound and the visual image. Apparently, the nickname “Snow” came from a love of the white stuff. As I said to him, “You are living in the wrong country!” His epiphany wine was a glass of Clos de Gat at a meal at Mul Yam. This opened a new world for him.

HOLY WINE is a beautifully made film, but it does have a kick in its tail. Most of the focus is on the wineries that created the boutique wine revolution in the early 1990s. Margalit Winery, Domaine du Castel and Tzora Vineyards are at the center of the Holy Wine story. There is some enchanting previously unseen footage of winemaking legends Yair Margalit, Eli Ben Zaken and Ronnie James working together 30 years ago.

The first part of the film is purely about Israeli wine. You feel you are entering into the style of documentary film that we in the wine world have always dreamed of. It is entertaining, informative and absorbing. The second part is far more controversial, as it suddenly changes tack and focuses on kosher wine. There are explanations about what kosher is and the case is made for taking Israeli wine off the kosher shelves in America.

The film then slightly loses its balance, becoming obsessed with kosher-bashing. Frustrated winemakers and the Tel Aviv wine intelligentsia hammer home the message that kosher wine smacks of religious coercion and religious power. It becomes a diatribe. The point is made and remade, and then, just in case we did not understand, it is made again. It is not a subtle undertone. It is like being slapped in the face with a wet carp again and again. This takes over the film.

Snow made clear that this was his objective. He wanted to take the controversial issue of kosher wine, “a subject that no one talks about,” and bring it to the forefront. So he slices it open on the cutting board, worms and all, to provoke, educate and promote consideration and discussion.

THE WRITER recommends taking a journey with this new book (Wine Journey) and THE POSTER for the Sonoma Film Festival launch of ‘Holy Wine.

Holy Wine does not take a balanced view. It does not put the facts on the table to let the viewer decide. The film does not investigate the spiritual aspect for making kosher wine by interviewing a religious winemaker or dwell on the commercial necessity. Most of Israeli wine is actually dependent on the kosher wine market. It is a film with an agenda, a point of view and a message; a film with an attitude. Shai says, “This film is a microcosm about what is going on in Israel. Israel is changing and I don’t like the way it is going.”

THERE IS a paradox here. In our dreams we want to be the “new” New Zealand. We want the awakening that Greek wines are experiencing for ourselves, and to be the latest new find, like Georgian wines. The reality though, is that the kosher market is the lifeblood for Israeli wine. Only a few wineries are kosher from belief, most are kosher from choice and this is usually for economic reasons. They have all freely made the decision to go kosher and to pay the price (emotionally, physically and financially), in order to enjoy the benefits of that important stamp on the back of the label.

We in the wine trade do not want Israeli wine to be defined by the word kosher. If we have worked over the years to disengage Israeli wine from the k-word, this film clearly succeeds to do the opposite. This film is a rant with a political view. It is also a discussion with ourselves – washing our dirty wine-stained laundry in public. Biting the hand that feeds you, or spitting into the well from which you drink is always questionable.

However, the film is well made, with some great filming, many noteworthy quotes, good background effects and stirring matching music. Shai is a talented director and filmmaker, and he made the film with no external funding. As such, he was totally unrestricted and free to do what he wanted. I absolutely defend his right to make the film with his own message. He is an artist giving a personal expression. If it was made with the intention to provoke debate, he has succeeded. When the film ended, I just sat there for a few minutes in silence, trying to absorb what I had just seen.

Holy Wine was launched at the Sonoma International Film Festival. I understand it will continue to do the film festival circuit. When you get the opportunity, you should see it. It provides a great insight into Israeli wine. The part on kosher wine will delight or infuriate you, depending on which side of the fence you sit on, but controversy in a work of art and an individual expression is not a disqualification. Welcome to the world of Israeli wine. Here we are, warts and all!

Visiting wineries is becoming more and more on the agenda of incoming and local tourists. The regular visitor who has done everything on prior repeated visits is looking for something new or different. You do not have to be a wine lover for a winery to be an option. It is very easy to add a visit to a winery on the way to the Sea of Galilee, Jerusalem or the Dead Sea. Furthermore, Tel Aviv has become a much sought-after destination for foodies, being highly recommended for its culinary surprises. Israel is also a haven for wine lovers with many gourmet treats, including artisan cheese makers, olive oil presses and so much more. After the disrupted COVID year, it is to be hoped that tourism will swiftly return to normal.

There is a new wine book published to assist and inform both those interested in Israeli wine and the casual tourist. It is called Wine Journey – An Israeli Adventure. It lists nearly 180 wineries spread all over the land of Israel. Wherever you go, there is a winery nearby making wine with individuality and passion, just waiting to share their story with you. This is a book you need to carry in your rucksack, keep accessible in the car or have by your bed.

It was written by winemaker/ wine educator Roni Saslove and wine expert/ wine tourism specialist Guy Haran. The graphics were done by drinks industry branding specialist Itamar Gur and the photographs were by award-winning David Silverman, the wine photographer of Israel. That is a winning team!

Coincidentally, Roni, Guy and David have each been individually featured in Wine Talk articles in the past. The book retails for NIS 96.

Look out for it at wineries and visitors’ centers. It is in both Hebrew and English and may also be purchased from israeladventure.wine/en/

This new book is different from The Wine Route of Israel (2015) and Wines of Israel (2020) published by Cordinata. These are recognizable by their green covers decorated with vine leaves. Both Wine Journey and the Cordinata books have a different focus and content. One does not disqualify the other. They complement each other nicely, and will sit well together on the wine lovers’ bookshelf. However, Wine Journey is new and therefore up to date. It covers more wineries and is a handier companion for the traveler.

(In the interest of full disclosure, I suppose I should make clear that I appear in Holy Wine, acted as editor of the English part of Wine Journey – An Israeli Adventure and was co-author of The Wine Route of Israel and Wines of Israel.)

So, there is a new film to see and a new book to read. Life is dvash v’ tuttim (honey & strawberries).

I hope all this wine culture will give you an appetite to get on your bike, visit some wineries and drink some Israeli wine!

The writer is a wine industry insider turned wine writer, who has advanced Israeli wine for 35 years. He is referred to as “the English voice of Israeli wine.” www.adammontefiore.com

Home Videos The WORLD of WINE – Wine News. Cheap wine, tasting notes and cooking with wine The World of Wine – May 2021 … END_OF_DOCUMENT_TOKEN_TO_BE_REPLACED

How to visit Napa Valley on a Budget. In this video Carson and I explain a few ways to enjoy Napa on the cheap. Tip and advice about how to visit Napa … END_OF_DOCUMENT_TOKEN_TO_BE_REPLACED

Home Videos Get To Know Argentina Wine | Wine Folly If you love Malbec, Argentina is your ultimate wine region. But that’s not … END_OF_DOCUMENT_TOKEN_TO_BE_REPLACED