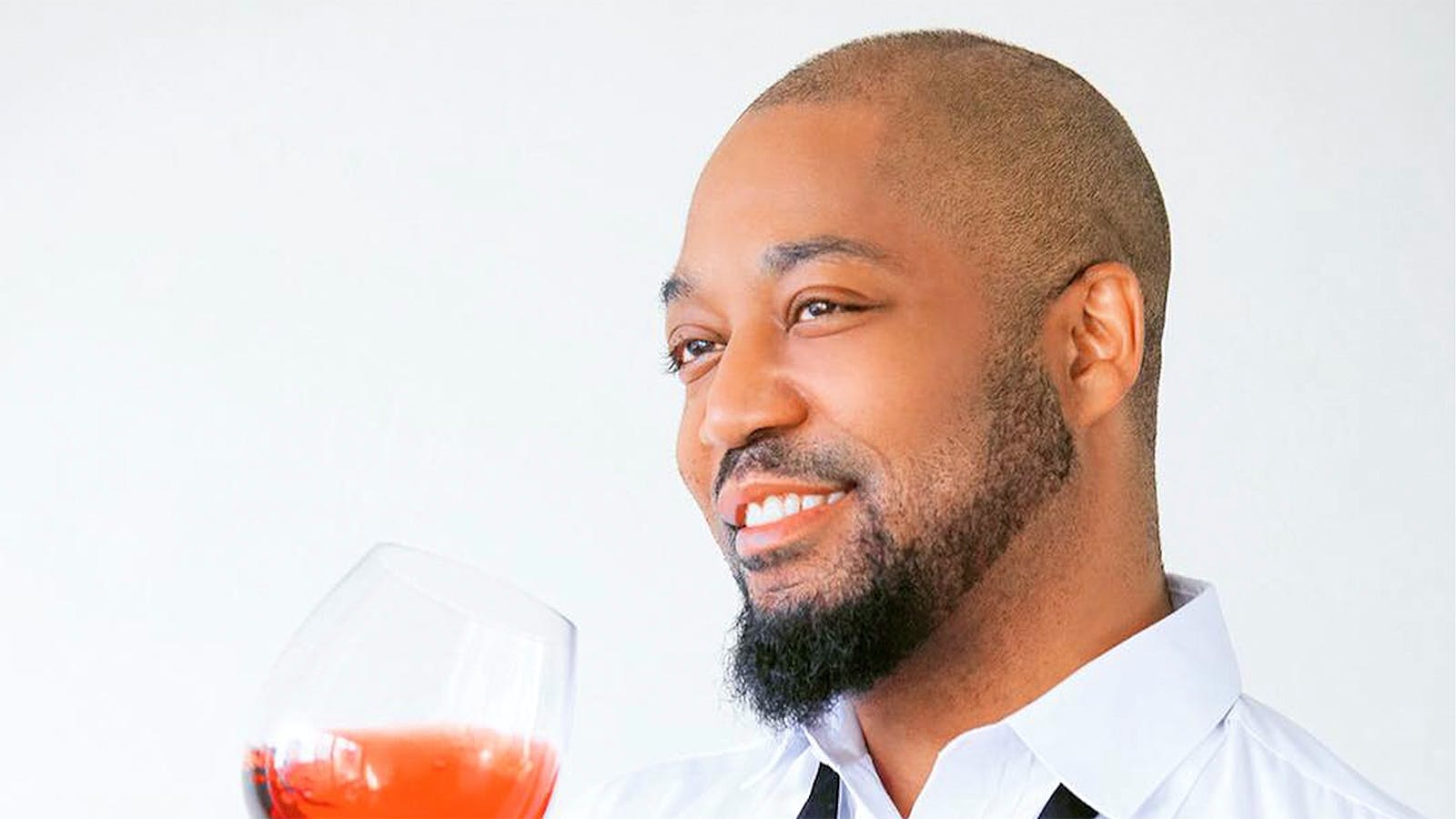 Charles Springfield has worn many hats in the wine world. Since 2010, the New York-based sommelier, author and wine educator has gone from journalist to wine buyer to salesperson, and built his one-man company into an education service for wine lovers around the city.

Springfield attributes his company name, “The Wine Stylings,” to his love for jazz. His grandmother was a classically-trained pianist from New York, and she would often babysit Springfield as they watched singers Sarah Vaughan and Ella Fitzgerald perform on PBS.

Born and raised in Milwaukee, Springfield recalls wine being a very natural part of the household. Big family barbecues with some of his 13 aunts and uncles would always include wine, but it wasn’t until he moved south for college and then became a journalist in New Orleans that he discovered there was more to it. When he arrived in New York in 2010 and took a part-time job at a wine shop on the Upper West Side, a career in wine was soon cemented.

In 2010, Springfield began taking classes at the now-shuttered wine shop Bacchus Wine Made Simple, and his passion grew. In 2012, he earned certification as a sommelier with the Sommelier Society of America and decided to use his expertise to educate students of all ages. Over the past decade, he has led food and wine pairing dinners and related events from the Upper East Side down to Tribeca.

Since the pandemic began, Springfield has shifted virtual like many others, utilizing Zoom and Instagram Live to keep teaching about wine. He’s also been promoting his two recent books The Less is More Approach to Wine and Maneuvering Rosé Wine with Style. Speaking about his first book, a comprehensive guide, he said, “I know wine can be a little intimidating and I can be a little silly, so I put that side of myself in there to make it more of a fun read. I just want to present it in a fun educational way, but not to be overwhelming.”

Springfield spoke with assistant editor Shawn Zylberberg about getting his start in New York, overcoming early mistakes as a sommelier and teaching wine in a virtual world.

Wine Spectator: How did you get your start in the wine business?
Charles Springfield: I left my advertising and PR job in 2010 and moved to New York. I started a small lifestyle marketing company just to get my foot into the business scene, and took a part-time job at a wine shop on the Upper West Side called “Bacchus Wine Made Simple.” Over time, I really fell in love with this whole concept of wine education. I didn’t realize how vast the world of wine was and how many different principles and categories it covered such as history, geology, physical science and all kinds of fun stuff. By 2012, I was certified as a sommelier by the Sommelier Society of America in New York.

WS: When did wine education become your main pursuit?
CS: When I started working at Bacchus, they had a wine education program for consumers every Monday. The general manager would teach the classes. That’s when I fell in love with wine education.

As I navigated through the wine world, I had to wear a lot of different hats to see where I best fit in. I was a wine buyer at one point, I ran wine events at a boutique on the Upper East Side, I worked the floor at Astor Wines & Spirits for the holiday season, then I worked in Tribeca for eight years doing a lot of food and wine dinners. I fell in love with teaching a class, whether it was two to four people or forty people, and it was really interesting to hear the questions people would give me and the expressions on their face when they learned something new. It felt like I was doing something positive and worthwhile.

WS: Why did you choose to write a wine book?
CS: I was teaching a class one day, and one of my students came to the store and she said, ‘I went to this restaurant this week and I was so confused by the wine list and I wish I had you in my pocket!’ I thought, ‘Wow, that’s an idea!’

I had writing experience but I hadn’t really written as much as I would have liked at that point, so it was an opportunity. When people took my classes and wanted more information from me, they’d have it handy in a book. The idea was planted in 2014, but it took me some time and several drafts to finally publish The Less is More Approach to Wine in 2019.

WS: Do you notice young people are generally intimidated by wine?
CS: It’s not only young people, but people that have been drinking wine for years that feel intimidated sometimes. They get used to these narratives that get passed from generation to generation like, ‘Oh, you gotta make sure this wine has legs.’ So when they hear these different notions of what quality wine can be, they only focus on this style and ignore other things. So it’s nice to open people’s eyes to the larger wine world, because I think sometimes we do play it safe in life and in wine and we get used to the same usual suspects over and over again.

WS: What were some early mistakes you made in your career?
CS: Sometimes when we get a lot of education we can seem a little full of ourselves in a way. I had to check myself a couple times because I had to realize this wine world is always changing and there’s so much information out there. I had to put myself as a continuous student as well as a sommelier and educator and be humble enough to learn new things.

WS: How have you shifted your teaching process since the pandemic began?
CS: In February of 2020, my events were picking up again, but a couple weeks later, everything shut down and all my classes were cancelled. I had a book signing that had to be cancelled too. I wish I would’ve thought about virtual right away. I had virtual plans for a long time but hadn’t pushed the button yet.

I slowly got into it and got requests to do Zoom classes, presentations and Instagram Live chats. It was touch and go because there were a lot of emotions and uncertainty going on, including tragic killings in the country. But I think the thing that brought me out of a funk was that I was able to get back to connecting with people over wine and figure out the virtual possibilities.

WS: How do you want to see the wine industry address racial injustice?
CS: I think we need to look at it if we have a pipeline for young professionals of color. Are we making opportunities accessible? Why is there so much disparity?

From 2018 to now, and as I expand my focus outside New York, I’ve gotten a lot more opportunities recently and exposure. It’s a silver lining to a very tragic situation and I hope it’s not a short term thing. I hope it continues and that people make strong programming and ensure that this is going to be a long lasting approach because we need it for minorities, people of color, for women and for the LGBTQ community.

CS: What’s the first wine region you want to visit after the pandemic?
CS: I fell in love with Provence from a writing and research perspective, so as soon as I can fly internationally I’d probably go there. I want to soak in that air, drink a bunch of rosé and smell the lavender fields.

Home Videos The WORLD of WINE – Wine News. Cheap wine, tasting notes and cooking with wine The World of Wine – May 2021 … END_OF_DOCUMENT_TOKEN_TO_BE_REPLACED

How to visit Napa Valley on a Budget. In this video Carson and I explain a few ways to enjoy Napa on the cheap. Tip and advice about how to visit Napa … END_OF_DOCUMENT_TOKEN_TO_BE_REPLACED

Home Videos Get To Know Argentina Wine | Wine Folly If you love Malbec, Argentina is your ultimate wine region. But that’s not … END_OF_DOCUMENT_TOKEN_TO_BE_REPLACED