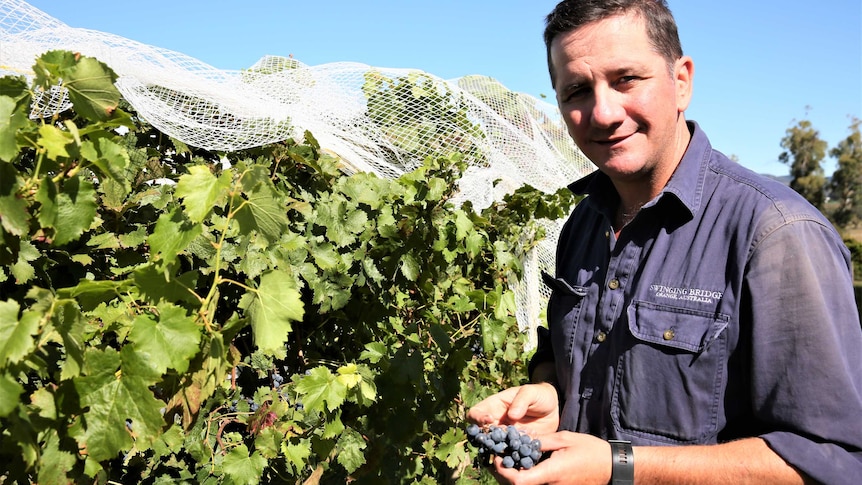 A year after many New South Wales winegrowers lost everything to smoke taint, they are now warning hazard reduction burns, which should protect them, could pose a new threat.

Tom Ward, the president of the Orange Vigneron’s Association, was one of hundreds to lose his vintage to smoke taint after the devastating fires of last summer.

Smoke lingered in the air of the high-altitude wine region for almost 60 days.

It has sparked concern in the industry that crops are in danger of being tainted by smoke, even during a mild bushfire season.

He said there was a risk that hazard reduction burns on properties or in State and National Parks near vineyards could affect grapes.

Stakeholders should work in unison: grower

The RFS hand out fire permits during the bushfire danger period, which runs from October to March.

That season, which ended yesterday, coincided with the grape harvest.

NSW Wine executive officer Angus Barnes said fire authorities made the final call on hazard reduction burns, and they must take into account how smoke could impact vineyards.

“It would be unrealistic to say that we want there to be no hazard reduction burns across the summer period.”

The goal, he said, was for all players; State and National Parks, farmers, wine producers, and the RFS, to work in unison.

“If there is a particular incident where we think it would be opportune to delay the burn for a period of days, or weeks, then we would ask that.”

AWRI’s Con Simos said no matter what type of fire generated the grapes could be affected.

“Whether it’s from a natural fire, or controlled burn, a double burn or even a grass fire the risk to vineyards is the same,” he said.

“Difficult decisions need to be made.”

Planning for the future

NSW Wine and the RFS both agreed there must be open communication to reduce the impacts of future bushfires on both the industry and the state.

“It’s in our best interest to work with the winegrowers to ensure that they don’t have their grapes affected,” he said.

“But we need to ensure that some of those fuel loads are reduced and communities are protected.”

Home Videos The WORLD of WINE – Wine News. Cheap wine, tasting notes and cooking with wine The World of Wine – May 2021 … END_OF_DOCUMENT_TOKEN_TO_BE_REPLACED

How to visit Napa Valley on a Budget. In this video Carson and I explain a few ways to enjoy Napa on the cheap. Tip and advice about how to visit Napa … END_OF_DOCUMENT_TOKEN_TO_BE_REPLACED

Home Videos Get To Know Argentina Wine | Wine Folly If you love Malbec, Argentina is your ultimate wine region. But that’s not … END_OF_DOCUMENT_TOKEN_TO_BE_REPLACED