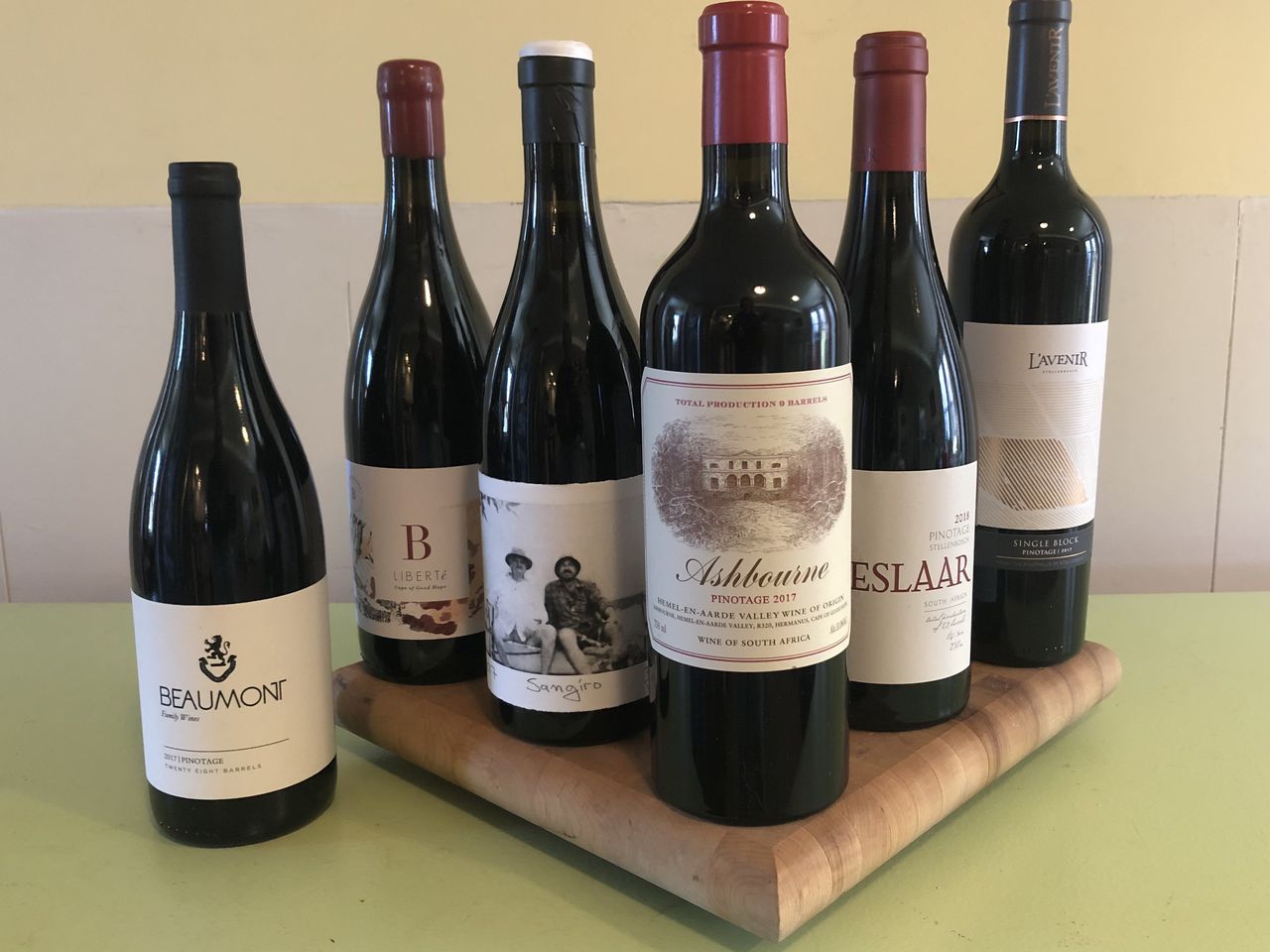 Certain grapes bring out the best in certain places.

Elegant yet earthy wines made from Pinot Noir and Chardonnay grapes abound in France’s Burgundy region.

Each one of these grapes has a distinct, delightful taste you won’t find anywhere else in the world.

Add to this list South African red wines made with Pinotage grapes.

While you can find wines made from Pinotage grapes from other places, the vast majority of Pinotage wines come from wineries in South African, where the grape was created almost a century ago.

And even within South Africa, Pinotage wines can taste dramatically different from one part of the country to another.

That was certainly the case with six Pinotage wines from six different wineries.

Some had bright, ripe flavors.

Others were more understated or aromatic, dry and flinty.

Let me add that all of them were outstanding and well worth searching for in your local wine store or online. Hope you enjoy.

Pinotage is a relatively new grape first created in 1925 in South Africa. University of Stellenbosch professor Abraham Izak Perold created the grape by cross-pollinating Pinot Noir plants with Cinsaut, which is sometimes spelled Cinsault. Perold then reportedly forgot about the seedlings when he left the university to work at a winery in 1927, according to “Wine Grapes,” the outstanding book about the history of different wine grapes written by Jancis Robinson, Julia Harding and Jose Vouillamoz. Charles Niehaus later saved the Pinot Noir/Cinsaut plants created by Perold and used them to create vines with Pinotage grapes. The name Pinotage comes from the combination of Pinot Noir and Hermitage, the name used in South Africa for Cinsaut grapes at the time.

Pinotage is grown in many wine regions throughout South Africa, including Swartland, Paarl and most notably Stellenbosch located just east of Cape Town. Outside South Africa, wines made from Pinotage grapes can be found in limited quantities primarily in California, Brazil and New Zealand. But odds are if you see Pinotage wine in a store or on a wine list at a restaurant, that wine likely came from South Africa.

WHY PINOTAGE THRIVES IN SOUTH AFRICA

Like many things to do with wine, it’s all about the weather and the topography in South Africa, according to Pinotage expert Dr. Etienne Terblanche, who recently co-hosted an online South African Pinotage tasting I attended.

“It’s really an interesting phenomenon that we have these cool summer temperatures in a really hot and warm climate,” Terblanche said, adding, “The biggest influence is probably the ocean currents that surround the Cape Town area – the cold current in the Atlantic (Ocean) and the slightly warmer current… in the Indian Ocean.”

“It’s a really interesting and peculiar place to grow grapes, much cooler than we expected,” Terblanche said.

The Cape Town area’s “very dramatic topography” also plays a significant role in the successful cultivation of Pinotage grapes in nearby vineyards, Terblanche said. “We have a mountain range in Stellenbosch… and we have amazing aspects and altitudes to play with,” he added.

As a result, “over very short distances of travel, you get very large differences in wines,” Terblanche said.

(I recently attended an online South African Pinotage tasting hosted by Pinotage winemaker Dirk Coetzee of L’Avenir Estate and viticulture and Pinotage expert Dr. Etienne Terblanche. Their comments appear first for each wine, followed by my wine tasting notes. Let me add I tasted these six Pinotage wines side by side over three days.)

Wine Tasting Hosts’ Comments – “There’s a massive maritime influence, a cooling effect on the vines. That’s what you’re going to taste. You’re going to taste not just the soils but also those berries that have been cooled down especially during the night.” – Dirk Coetzee

Writer’s Wine Tasting Notes – One of my favorite wines of the tasting, this smooth, understated, dry wine has a long, luxurious finish. Reminiscent of an elegant Bordeaux blend, flavors range from dried blackberries and raspberries to roasted almonds and other subtle flavors. Tastes great the second day as well. Didn’t last long enough to taste a third day.

Wine Tasting Hosts’ Comments – “It’s a cooler area… They farm with very shallow shale… Sometimes, they only have 40 to 60 centimeters to work with… They have very beautiful old vines. They have a 46-year-old vineyard, but it also has some younger vines. For me, this is a great combination of old technique… with younger innovations. ” – Dirk Coetzee

Wine Tasting Hosts’ Comments – The winemaker “is trying all out to have minimum interference. He really just wants to be true to the sense of place in terms of his site. He’s all for modern Pinotage. It’s something he really fights for. He fights for floralness, he fights for fragrance and that you can pick up in the wines… it’s gentle extraction.” – Dirk Coetzee

Writer’s Wine Tasting Notes – This is the wine for those of you who prefer your flavors on the understated and softer side. A bit too understated at first, make sure to give this wine time to evolve and slowly reveal its subtle flavors, which include a hint of fresh picked raspberries and plums and distinct floral notes. This wine’s well worth the wait and tastes especially great the second day after opening the bottle.

Wine Tasting Hosts’ Comments – “This is a wine I made personally… The block itself is situated on the top of a hill. And the beautiful thing about L’Avenir, which I would say makes L’Avenir quite special is, we have a lot of this decomposed shale and this is what we slot into our Pinotage. We really believe it gives us great fruit intensity and this is why we have chosen to farm with this South African grape, because of the soil type. It really fits.” – Dirk Coetzee

Writer’s Wine Tasting Notes – For those of you who love dry, flinty red wines like myself, this is the one you’ll likely be most excited about. This wine’s aromas and flavors cover wide range – from dried blackberries, plums, raspberries and roasted almonds to fragrant, floral aromas. A magical wine that manages to be lively and vibrant while remaining dry and understated. Terrific straight out of the bottle and the second day as well. Didn’t make it to the third day. It was just too good and too tempting.

Wine Tasting Hosts’ Comments – “I think the amazing thing about these wines is most of the winemakers get to work with a lot of different sites… Abrie Beeslaar is the winemaker for Kanonkop Estate, which is just down the road. But he also gets to source and buy lots of difference components all across not just Stellenbosch but from other areas as well… Through the years, spending time with different sites, he really felt… this specific hill, this particular block of vines (where the grapes for this wine come from) really gives him the best wines… This particular hill has a nice combination of granite and shale.” – Dirk Coetzee

Writer’s Wine Tasting Notes – Bright, ripe, lively fruit flavors (especially cherry, raspberry and plum) straight out of the bottle reminiscent of Pinot Noir wines from California’s Napa Valley. If you like such flavors on the softer side, give this wine a day or two to open up, particularly since this wine’s still relatively young. The second and third day, the fruit flavors become softer and more subtle. Personally, though, I would give this wine another five years to mature and evolve.

Wine Tasting Hosts’ Comments – “The last wine is almost as secretive as the wine maker. He’s a very interesting bloke and he makes beautiful wines. I think this is quite an interesting wine, especially in terms of site, it’s quite unique.” – Dirk Coetzee

“If we travel 300 kilometers north of Stellenbosch, we land in a mountain range called the Cederberg Mountain Range… This (vineyard where the grapes are grown for this wine) has a sandy terroir… The site is about 300 meters above sea level to about 700 meters above sea level. It’s a really arid place… It gets about a third of the rain Stellenbosch gets… But it’s also close to one of the coldest currents in the world… which blows off the Atlantic (Ocean) and creates a very interesting microclimate for wines.” – Etienne Terblanche

Writer’s Wine Tasting Notes – Only 1,790 bottles were made of this fascinating, complex, distinct wine. Straight out of the bottle, the wine tastes flinty yet fruity, dry yet supple, full and aromatic. Graceful and understated with a hint of dried plums, this intense wine needs time to breathe. Twenty minutes after opening the bottle, the finish becomes even longer and more graceful. The next day, the wine has an intense yet bright and lively finish with hints of light fruit, including plums and blackberries. Yet another unique, delicious Pinotage wine from South Africa.

Home Videos The WORLD of WINE – Wine News. Cheap wine, tasting notes and cooking with wine The World of Wine – May 2021 … END_OF_DOCUMENT_TOKEN_TO_BE_REPLACED

How to visit Napa Valley on a Budget. In this video Carson and I explain a few ways to enjoy Napa on the cheap. Tip and advice about how to visit Napa … END_OF_DOCUMENT_TOKEN_TO_BE_REPLACED

Home Videos Get To Know Argentina Wine | Wine Folly If you love Malbec, Argentina is your ultimate wine region. But that’s not … END_OF_DOCUMENT_TOKEN_TO_BE_REPLACED