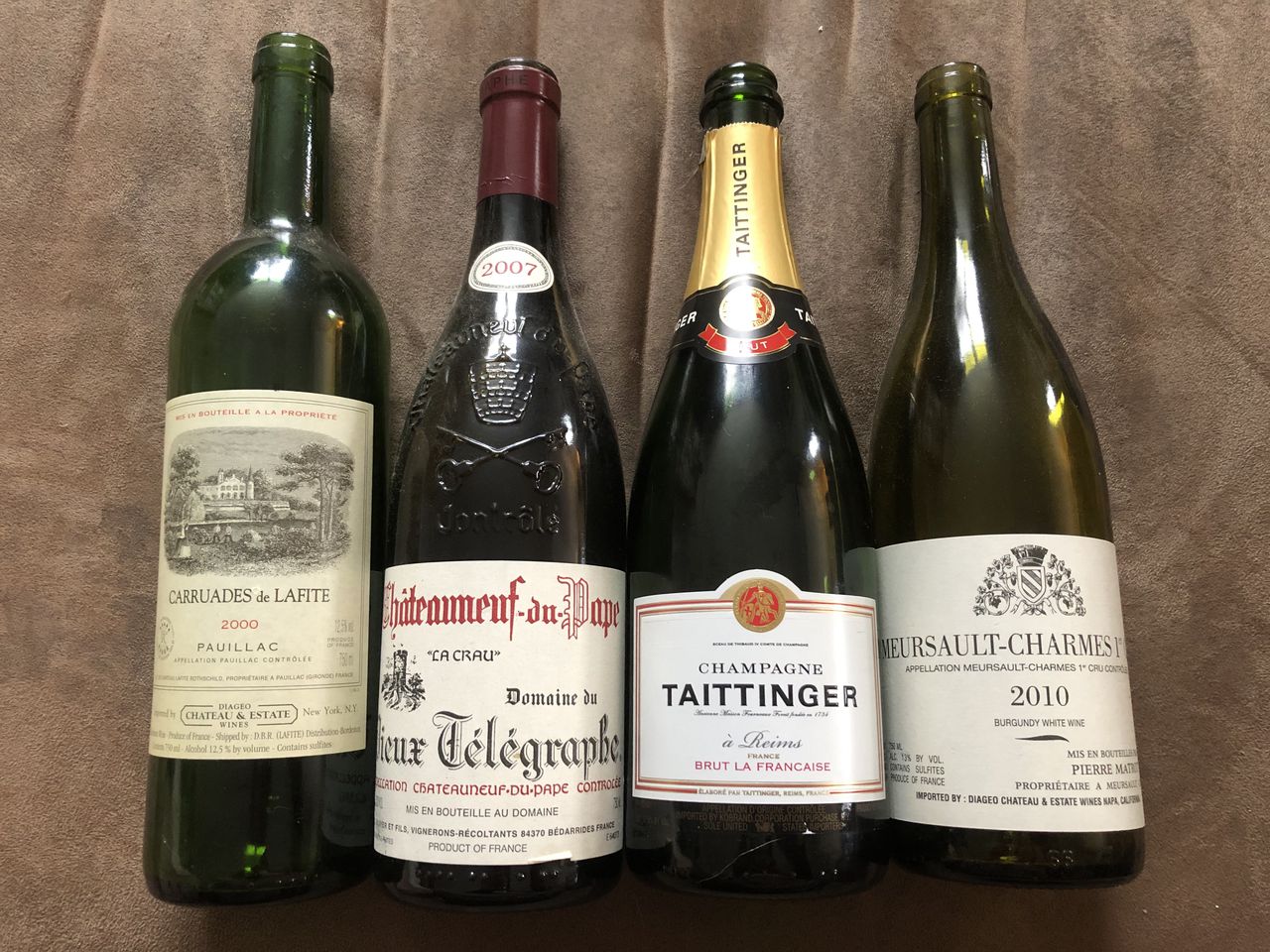 A can of green beans has the words “green beans” written clearly on the label.

What you read is what you get.

You would think it would be fairly easy to figure out what kind of wine is in a bottle based on its label.

And this is especially true with many wines from several European countries.

Unlike wines from California, New Zealand or Argentina, many European wines (especially French wines) have no information on the label about what grapes were used to make the wine. Even figuring out who made the wine can often be a challenge.

Instead, these detailed wine labels contain a wealth of different information about the wine. But in order to understand what’s in the bottle, it’s important to know how to read the label.

That’s why I thought it might be helpful this week to explain how to read the label on a bottle of French wine. Specifically, I decided to focus on labels for four of the main wine regions in France – Bordeaux, Burgundy, Champagne and the Rhone region.

Let me add that even in the same wine region in the same country, wine labels can be very different. So if you encounter a wine label in a store or a restaurant that you don’t understand, simply ask the waiter or a salesperson for advice.

In future wine columns this year, I’ll tackle wine labels from Italy, Spain and the thoroughly confusing ones from German.

HOW TO READ A CHAMPAGNE WINE LABEL

I thought I would start with one of the easier French wine labels – sparkling wine from France’s Champagne region.

Starting from the top of the bottle and working our way down, this is what each line means on a bottle of Taittinger Champagne Brut La Francaise. ($44.99 at Table & Vine in West Springfield)

Sceau de Thibaud IV de Champagne – I wouldn’t worry too much about this line for most Champagnes. This line simply means it’s the seal (”sceau” in French) of Thibaud IV, a 13th century “warrior, poet and great explorer” who loved Champagne, according to Taittinger’s website.

Taittinger – Name of the Champagne producer. In Champagne, these producers are known as “houses” rather than wine markers.

Ancienne Maison Fournaise Forest Fondee en 1734 – Another line I wouldn’t worry about with many other Champagnes. This line simply means “former house” (”anciene maison” in French) of Fournaise Forest, the former owners of the winery which was founded (”fondee”) in 1734.

A Reims – The name of the town in Champagne (in this case, Reims) where the wine is produced.

France – I think this one’s pretty self explanatory.

Brut La Francaise – This line is very important. The first word (brut) refers to the style of Champagne. Brut Champanges are generally very dry. La Francaise is the type of Champagne produced by Taittinger. Strange as this might seem, this small line in fine print near the bottom has some of the most important information (style and name of Champagne) about the wine.

Appellation D’Origine Controlee – Another line in the fine print you probably don’t need to worry about, this line simply means the wine was produced in accordance with the rules and regulations that apply to France’s Champagne region, a legally-protected geographic area referred to as an appellation.

HOW TO READ A RHONE WINE LABEL

Next, let’s move south to France’s Rhone region, a vast area famous for its affordable, robust red wines. Labels for Rhone wines can be very different from one winery to the next. Some are fairly straightforward. Others can be quite complicated. I decided to pick a moderately difficult label – 2015 Domaine du Vieux Telegraphe “La Crau” Chateauneuf-du-Pape ($69.99 at Table & Vine)

Chateauneuf-du-Pape – The name of the village in the Rhone region where the grapes are grown. This is line often in the largest print on Rhone wine bottles.

La Crau – The name of the exact vineyard where the grapes are grown in Chateauneuf-du-Pape. Not all Rhone wines have this line. This wine does since the La Crau vineyard – located on a rocky hilltop – is such a distinct place that produces outstanding wines.

Domaine Du Vieux Telegraphe – The name of the winery that created the wine. Along with the name of the village, this is the most important line on a Rhone bottle.

HOW TO READ A BORDEAUX WINE LABEL

Let’s head west now to one of the most famous and most revered wine regions in France – Bordeaux. Here again, I simply tried pick a wine with a more complicated wine label – 2000 Carruades De Lafite. Don’t worry so much about the vintage or the price, which I did not include since this vintage sold out long ago. Newer vintages of this outstanding wine generally cost around $200 a bottle. Simply think of this as a guide for deciphering what everything means on many Bordeaux wine labels.

Mis En Bouteille A La Propriete – This straightforward line in French simply means the wine was “bottled at the property.”

Carruades De Lafite – This line is a bit tricky, which is why I picked this particular bottle. Normally, this line in large print refers to the name of the winery in Bordeaux that produced this wine. In this particular instance, “Carruades De Lafite” refers to the name of the wine, which in this instance is the “second wine” made by Chateau Lafite Rothschild. Many wineries in Bordeaux produce a second, lower-priced wine using the remaining grapes left over after making their first wine. While such second wines like this one have greatly increased in price in recent years, there are still many bargains to be found among second wines from Bordeaux.

Pauillac – This line refers to the specific village in Bordeaux where the grapes are grown to produce this wine. Pauillac is located in the Medoc region on the left bank in Bordeaux, which is divided into the left bank and right bank based on which side of the Gironde River the winery is located on in Bordeaux.

Appellation Pauillac Controlee – This line means the wine was produced in accordance with the rules and regulations that apply to wines from Pauillac, a legally-protected geographic area referred to as an appellation.

S.C. De Chateau Lafite Rothschild, Proprietaire A Pauillac (Gironde) France – This line is like the fine print that television announcers read really fast at the end of advertisements. S.C. De Chauteau Lafite Rothschild is simply the official business name of the winery, which based on the S.C. must be a general partnership (”Societe Collectif” in French). The rest of this line simply refers to the owner (”proprietaire” in French) and exact location of the winery in Paulliac in the Gironde department (French equivalent of state) in France.

HOW TO READ A BURGUNDY WINE LABEL

I’ve saved the best for last – Burgundy, which isn’t even called Burgundy in France. This legendary wine region is known as Bourgogne in French. Actually, Burgundy wine labels have become easier to read in recent years. I think that’s partly because wines from this region have become so popular around the world. But enough chit chat. Let’s get to the bottle, which in this case is an outstanding white wine – 2010 Meursault Charmes 1er Cru ($90 Suggested Retail Price).

Meursault Charmes 1er Cru – I will say one thing for many Burgundy wines. They get straight to the point and often feature the most important information in a large print right near the top of the label. Here you can find pretty much everything you need to know about the wine, except for which grapes were used to make the wine. But in general, most red wines in Burgundy are made with Pinot Noir grapes and most white wines are made with Chardonnay grapes, including this one. As for the label, Meursault is the name of the village in Burgundy where the wine is produced. Charmes is the name of the vineyard in Meursault where the grapes are grown. 1er Cru means the wine is a Premier Cru, an official designation given to certain vineyards in Burgundy. The highest vineyard rating is “Grand Cru.” Premier Cru or first cru (1er cru) is just below Grand Cru. The rest of the vineyards are a rather Motley Crue. (This is a joke for those of you not familiar with 80s hair metal bands, Dad.)

Appellation Meursault-Charmes 1er Cru Controllee – This line means the wine was produced in accordance with the rules and regulations that apply to Premier Cru wines from the Charmes vineyard in Meursault, a legally-protected geographic area referred to as an appellation.

Mis En Bouteilles Par Pierre Matrot – Even though this line appears near the bottom of the label in small print, it’s one of the most important lines on the label. This line refers to the name of the winery that made the wine. In this case, Pierre Matrot made the wine (”mis en bouteilles par” means “bottled by” in French). This is one of the reasons why I think Burgundy wine labels can be so confusing to so many people. But it’s also part of the charm of wines from Burgundy. While most wine labels in other regions prominently feature the name of the winery, Burgundy takes a much more understated, subtle approach – just like its magical wines.

Proprietaire A Meursault (Cote D’Or) – This last line refers to the owner (“proprietaire” in French) and exact location of the winery in Meursault in the Cote D’or department (French equivalent of state) in France.

So there you have it. Hope this helps and hope you enjoy some great French wine in 2021!

Home Videos The WORLD of WINE – Wine News. Cheap wine, tasting notes and cooking with wine The World of Wine – May 2021 … END_OF_DOCUMENT_TOKEN_TO_BE_REPLACED

How to visit Napa Valley on a Budget. In this video Carson and I explain a few ways to enjoy Napa on the cheap. Tip and advice about how to visit Napa … END_OF_DOCUMENT_TOKEN_TO_BE_REPLACED

Home Videos Get To Know Argentina Wine | Wine Folly If you love Malbec, Argentina is your ultimate wine region. But that’s not … END_OF_DOCUMENT_TOKEN_TO_BE_REPLACED