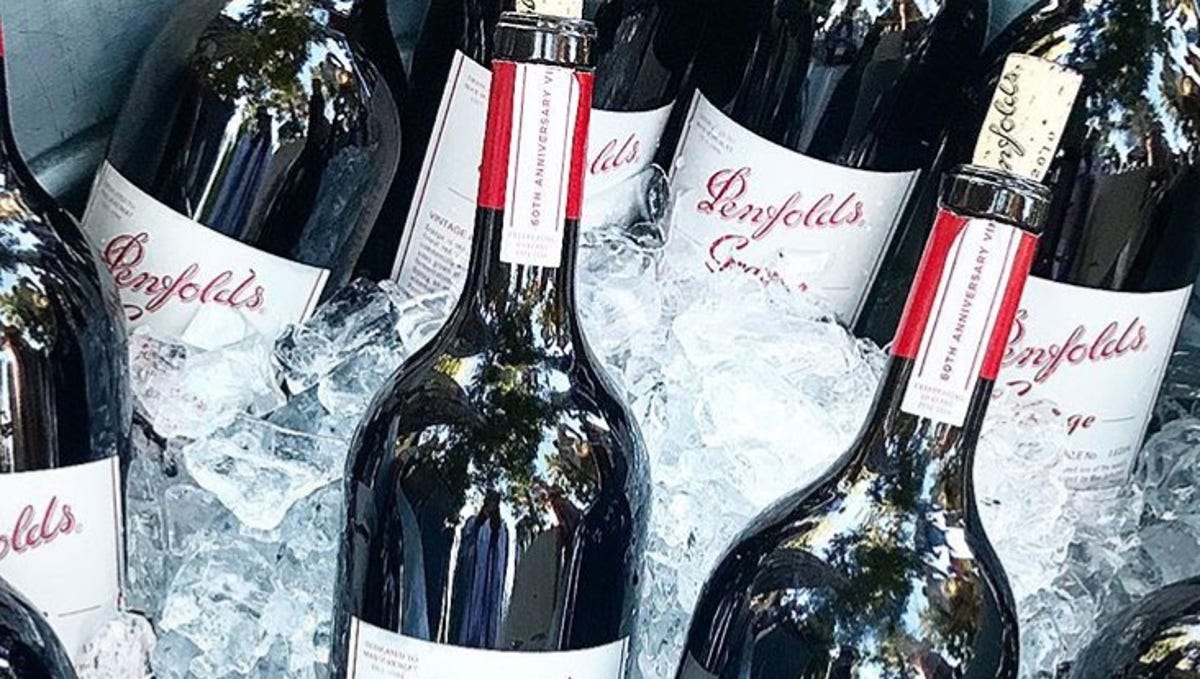 Last month we went to New Zealand and since we are done there, let’s go down under.

Australia has many wineries and grows many varietals. But much like sauvignon blanc is to New Zealand and Malbec to Argentina, syrah is to Australia. Now, to be correct, the Aussies call it shiraz. The grape made its way to Australia in the 1830s, it is the most widely planted grape varietal of the country and is made in many styles from jug wine to some of the most iconic wines in the world. There are many, many great wineries in Australia, but I would like to discuss one that I am very fond of that being Penfolds begun in the 1840s. Years ago I placed some of the wines on several lists I was dealing with at the time. The winery was to me the quintessential Australian winery. They were always expanding their holdings, trying new varietals, new blends, different oak treatments and offering differing levels of price and quality. For me, it was the perfect winery to fit certain wines either into a wine-by-the-glass program or to list a bottle. They stayed away from the cute animals on Australian labels and maintained a certain stature thankfully. Over the years, the winery has been bought and sold several times and currently, it is owned by Treasury Wine Estates, an Australian company headquartered in Melbourne. It is a rather large wine company owning almost 50 brands. Among them are some of my favorite wineries: BV, Beringer, Etude, Provenance Vineyards, Stags’ Leap Winery, Wolf Blass and Coonawarra, to name a few of their real gems!

I was drawn to Penfolds early on because of their world-renowned red wine, that being Grange. It is usually made of all shiraz with a small dose of cabernet sauvignon and is aged in American oak. When I started placing it on the lists it didn’t cost all that much, it was expensive, but we had a spot for it. Today, it is very expensive, but if you have the money, c’est la vie, you won’t be disappointed! Penfolds back then was known more for their red wines and they have some wonderful ones, but they do have a few whites. So, again, starting at their top is Yattarna, 100% chardonnay, released in 1998 with the 1995 vintage. This is their premier white wine, again, not for the faint of heart, but nowhere near the price of Grange. Penfolds as I got to understand them was always experimenting, trying new techniques, differing blends, barrels everything. With Grange they created a red wine that is considered one of the best in the world. With Yattarna, their goal was to create a white wine again to be considered one of the best in the world something to rival the most famous white Burgundy, Corton-Charlemagne. By the way, Yattarna is an aboriginal term translating to“little by little!!” They were in no rush as with so many of the trials, patience is rewarded; they want to get it right.

So, I had established that I was dealing with a very solid wine company with a great track record for making great wines. I have told you about their two rock stars not to frighten you about their wines but rather to enlighten you about their practices, philosophy as it trickles down their wines from top to bottom. For the everyday consumer, they have a line named Rawson’s Retreat, several varietals, priced around $15/bottle then a step up is their Koonunga Hill line, several varietals, around $20/bottle. At around $25/bottle they offer Bin 8 Shiraz and Bin 9 cabernet. Next will be their Bin 28 Kalimna shiraz somewhere around $35/bottle. Moving up the scale is a wine that is very popular, that being Bin 389 a blend of cabernet and shiraz, this will set you back about $70. You will see it on many restaurant wine lists for around $95. Restaurants love it because it is a great producer, a great blend and a great enhancement to an upscale meal. By the way, bin numbers? They originally referred to a storage area in wine cellars, a way of locating wines. Nowadays it refers to a wine and is for sake of another term, a marketing tool. Consumers will remember the bin number of the wine they enjoy. There are more wines, higher up the price scale and all worth it. I will say, their strength is in making shiraz and cabernet, however they do have some great chardonnays and if you can find it, a great Riesling.

While winter is still with us, red wines are still the wines for pairing with hearty foods. When I think of what to pair with shiraz, wild boar comes to mind. And with their cabernet shiraz blend, lamb or ribeye works well. The chardonnays will pair with many of our richer seafood dishes. As you can surmise, I am a fan of this winery and I think if you try some of their wines you will be converted if you aren’t already.

Once again, my PSA. The virus situation is getting much better all-around and the new governor is slowly opening up our fabled hospitality industry as well as our small businesses throughout the state. The timing is perfect as normally this time of year all our hospitality businesses are preparing for summer. They all still face many challenges, some old some new, but as a group they are resilient and up for the challenges. Bottom line is the bottom line!

Len Panaggio is a wine consultant and former corporate beverage director for Newport Harbor Corp. Send feedback and suggestions to lcp23223@gmail.com. The Wine Press runs each month in The Daily News and online at newportri.com.

Home Videos The WORLD of WINE – Wine News. Cheap wine, tasting notes and cooking with wine The World of Wine – May 2021 … END_OF_DOCUMENT_TOKEN_TO_BE_REPLACED

How to visit Napa Valley on a Budget. In this video Carson and I explain a few ways to enjoy Napa on the cheap. Tip and advice about how to visit Napa … END_OF_DOCUMENT_TOKEN_TO_BE_REPLACED

Home Videos Get To Know Argentina Wine | Wine Folly If you love Malbec, Argentina is your ultimate wine region. But that’s not … END_OF_DOCUMENT_TOKEN_TO_BE_REPLACED