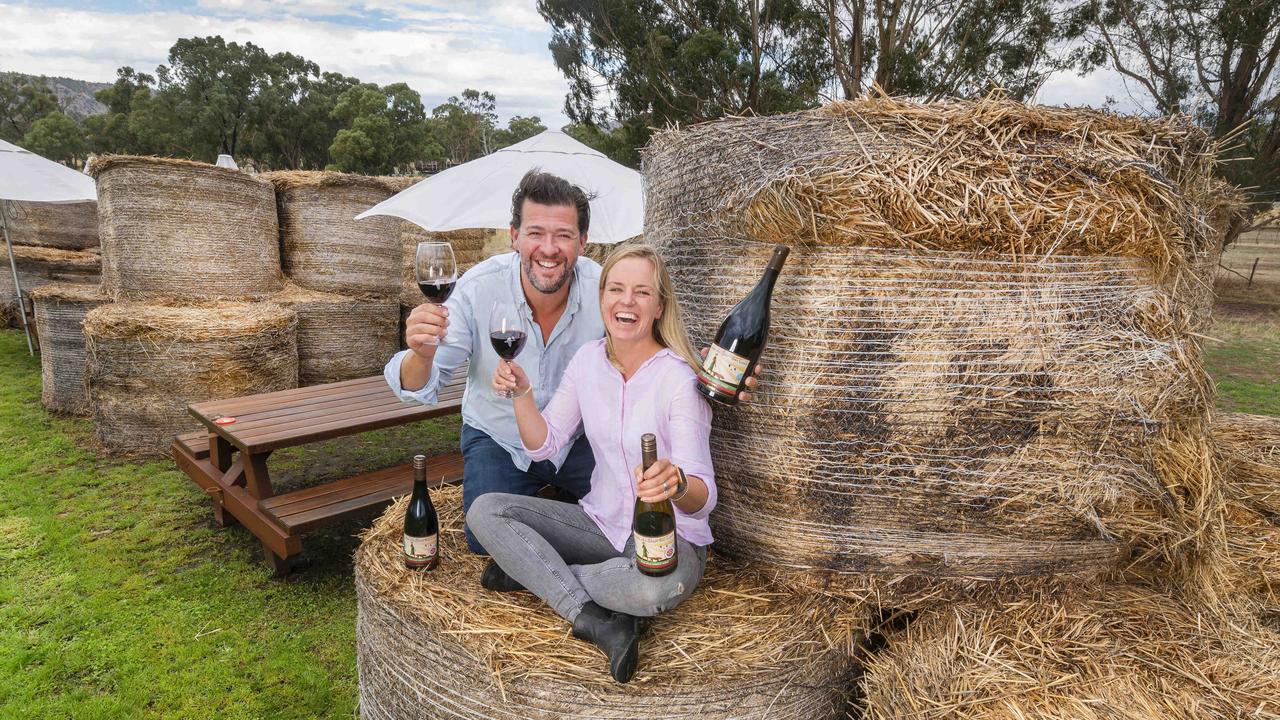 In the dying days of 2019, winemaker Ken Eckersley armed himself with a bucket of water and a rake wrapped in a wet towel.

He’d set off in the car at his Gippsland winery, Nicholson River, to put out spot fires caused by the ferocious Sarsfield blaze burning about 10km north.

The aim was to protect the family-run winery he’d owned with wife Juliet for 43 years.

He’d already been told three times by authorities to leave that week, but evacuating wasn’t an option – even when the flames came within 250m of the vines.

The Eckersleys would stay and fight.

But at 11pm, by sheer luck, everything changed. Southerly winds pushed the fire away from the vineyard but the grapes still couldn’t be saved. Smoke had penetrated into the skins

No wine would be made at Nicholson River in 2020, and the Eckersleys weren’t alone.

The same problems were felt by grape growers and producers nationally, with many forced to make tough, expensive business decisions just months into the new year.

The pandemic followed soon after, keeping us at home for months and further crippling regional tourism.

Then, as we prepared to bid farewell to 2020, China – the country’s largest wine export market worth $1.15 billion annually – slapped tariffs on all imported Australian wines.

But it wasn’t all bad news, with the people working in Victoria’s wine industry showing resilience and character by the barrel load.

Bushfires burning in New South Wales, South Australia and Victorian towns along the Gippsland coast made headlines here and abroad, yet little was mentioned about the silent killer choking the state’s north and northeast wine regions.

Smoke from the NSW fires had moved south, blanketing the regions of King Valley, Beechworth and Rutherglen for weeks.

No northeast district wineries were directly impacted by fire, unlike the Eckersleys or esteemed wine brand Henschke, which saw flames destroy 90 per cent of its Lenswood vineyard in the Adelaide Hills, including some of the region’s oldest pinot noir vines.

Instead many Victorian grapes, the skins in particular, were tarnished by smoke.

Smoke taint isn’t great for winemaking – mainly because red wine is made from grape skins as that’s where the colour, flavour and tannin lies and there’s no way of knowing how badly a crop is affected until it’s made into wine and sent for testing.

Young wines may show no signs of smoke taint, but can later develop traits after years in the bottle. Some winemakers argue in small doses the wine can taste like it has been aged in a toasted barrel, while others less poetically say it’s like “drinking an ashtray”.

Smoke taint affected 3 per cent of Australia’s national crush last year. But in the northeast, Wine Victoria estimates just 69 per cent of the 25,808 tonnes on the vine prior to harvest last year were picked.

“Some (growers) can’t make wine, but they still have to pay to pick that fruit off the vines and prune,” Bradbury says.

“Some will carry two full years of cost and won’t recoup any money until they sell wine for 2021.”

All Saints Estate chief executive Eliza Brown, along with her business partner-siblings Angela and Nick, was faced with this reality.

No fire tore through the Brown’s Rutherglen estate, but lingering smoke in the vineyards forced them to send the wine for testing.

Luckily the taint levels were low, meaning they could use the vintage in bulk wine – saving it from being turned into hand sanitiser.

“Sometimes you have to make those big calls. Winemaking is like gambling, you put it all on red or black and see how it pans out,” Brown says.

The Browns are fourth-generation winemaking siblings who own and run St Leonards Vineyard, All Saints Estate and Mount Ophir Estate luxury accommodation in northeast Victoria.

They are well known in the wine game, with their late father Peter one of the four Brown Brothers founders. Despite their stable footing in the industry, Brown still feared what 2020 would do to their business.

“Our biggest fear was how we would fund our winemaking,” Brown says.

“If we lose a vintage we need to fund the wine for that vintage, which doubles the amount of money going out.”

As soon as the first lockdown closed the gates at All Saints HQ in March, the Browns set to work on how to keep their customers.

“Facebook and social media streams became incredibly important and it forced winemakers, who are really scientists by trade, to put themselves out there,” Brown says.

“People were buying better because they weren’t going out and were experimenting with wine they wouldn’t usually buy.”

Across Victoria, liquor retailer Dan Murphy’s was seeing wine sales from smaller producers grow at almost twice the rate of others since COVID, suggesting a desire to buy local.

But according to Bradbury, and many industry insiders, alcohol consumption was on-par with pre-pandemic habits.

“Across the board we didn’t see wine sales soar over COVID,” she says.

“More people were drinking more wine at home and I think the recycle bins were full, but the wine people would have ordered out at a restaurant or events … those sales had ceased.” During lockdown Matt Fowles, of Fowles Wines, was losing money at both his on-site restaurant and in the events arm of his Avenel winery in central Victoria.

So in June, he and his wife Luise launched DIY wine labels for drinkers to personalise wine bought at Fowles’ virtual cellar door – an initiative that worked surprisingly well. “Winemakers are really good at dealing with COVID,” Fowles says.

“We deal with the randomness in nature every day, that is what we do. We have a plan, but we must be ready to react to Mother Nature – bushfires or disease outbreaks – we are good at adapting to these situations.”

Laurent Rospars, St Kilda’s Prince Hotel head sommelier, has seen his share of disasters across four decades in the food and wine industry.

The chef-turned-sommelier saw business take a dive after September 11 terrorist attacks and the Global Financial Crisis, but knows things eventually make a turn for the better.

“In nearly 50 years I have been working, I haven’t seen anything like (the pandemic),” Rospars says.

“We can’t say it’s anyone’s fault and we have to keep just doing what we do. The Aussies are very resilient.”

Rospars stayed open for takeaway bottle sales. Business was quieter, as expected, but as soon as lockdown ended things boomed.

Bradbury says that sentiment was echoed in cellar doors statewide, with some seeing massive sales in the weeks after Victoria’s second lockdown.

“Some wineries were reporting 30 to 100 per cent increases from their normal cellar door traffic,” she says.

The state government’s Click for Vic campaign, launched in August, had also made Victorians more aware of buying local and direct from wineries. Blue Pyrenees chief winemaker Andrew Koerner saw an overwhelming response once lockdown lifted, and was getting “bus loads” of visitors to his western Victorian winery in the Pyrenees wine region.

“There was a real, noticeable desire to get out again,” Koerner says.

“The silver lining about keeping Victorians in Victoria has meant there was more business than ever before. Visitation is up, the accommodation is full, we are full at the cafe and cellar door. It’s a good problem to have.”

As Victorians woke from their long, lockdown slumber in November, the wine industry copped its final blow for 2020 when China imposed more than 200 per cent tariffs on all Australian wine imports, after the country launched an anti-dumping investigation. Preliminary findings from China’s investigation found Australia had been “dumping” or subsidising wine, causing “substantial harm” to its domestic market.

The relationship between the two countries soured after Australia and its other western allies supported a probe into the origins of COVID-19.

“Businesses are working to diversify, but no other market offers the same prices, volume and growth potential as the China market at this point in time,” he says.

A free-trade agreement between Australia and China in 2016 perhaps made exporting to the country more appealing for many local winemakers.

Of all Australia’s wine exporters, 81 per cent export to China.

At the end of 2020, Australian wine exports to China were worth a whopping $1.15 billion. However, the latest Wine Australia data, released in February, shows a sharp decline in export volumes and value in November and December last year – with tariffs causing a downturn in exports to mainland China by 14 per cent to $1.01 billion.

That figure may sound high but is expected to dive further into 2021 as the impacts of the tariffs are felt.

Smaller producers like Blue Pyrenees and Fowles Wine export small amounts to China but have diversified their markets.

Blue Pyrenees is looking to move some of its international exports (90 to 95 per cent would usually go to China) to Japan, while Fowles is comfortable with its long-term stake in the US.

“China would only be 5 per cent of our revenue and is a relatively low margin for us,” Fowles says. “(The China tariffs) are a bruise for us, more of a frustration than anything else. We went to the US years ago and have spent more time focusing on that market.”

Meanwhile, positive change is brewing on a larger scale with the launch of the first Wine Victoria digital database Behind the Vines in February.

Bradbury says the online database (vicwines.com.au) with hundreds of listings, along with the Click for Vic campaign, will do wonders for the wine industry.

While Victoria’s 2021 harvest has only just begun, Bradbury says early reports of yield and quality are promising statewide – even in smoke-affected Gippsland.

In a good sign, grapes are weighing down the vines at the Eckersley’s Gippsland vineyard this year.

“Things are looking good. We are more upbeat than last year,” Eckersley says.

Originally published as Wine industry fights back after horror year

Home Videos The WORLD of WINE – Wine News. Cheap wine, tasting notes and cooking with wine The World of Wine – May 2021 … END_OF_DOCUMENT_TOKEN_TO_BE_REPLACED

How to visit Napa Valley on a Budget. In this video Carson and I explain a few ways to enjoy Napa on the cheap. Tip and advice about how to visit Napa … END_OF_DOCUMENT_TOKEN_TO_BE_REPLACED

Home Videos Get To Know Argentina Wine | Wine Folly If you love Malbec, Argentina is your ultimate wine region. But that’s not … END_OF_DOCUMENT_TOKEN_TO_BE_REPLACED