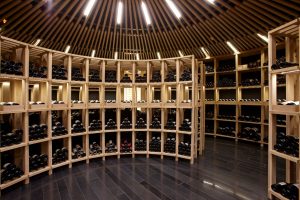 José Polo, co-owner and sommelier of the Michelin starred Atrio restaurant-hotel in Cáceres western Spain, has issued a plea to the thieves behind last week’s fine wine heist.

‘I would buy the wine back from the robbers especially the 1806 Château D’Yquem,’ Polo told Decanter.

Polo today revealed that 10 old vintages of Château d’Yquem and more than 20 Romanée-Conti, Burgundy wines, worth more than £1m, were among the fine wines robbed from Atrio’s prized wine cellar in the early hours of Wednesday, October 27th.

Polo said thieves would have difficulty selling the wines on as they were all numbered.

‘Due to the rarity of these wines some of which are very old vintages, it would be extremely difficult for these wines to be sold on,’ said a senior wine fine industry source at Christie’s Auction House.

Having acquired the bottle at Christie’s auction, winemakers at Château D’Yquem salvaged this wine in 2001, following a breakage, near the neck of the bottle, by transferring the wine to another bottle.

Speaking to Decanter, Polo said that a woman aged in her forties, using a Swiss passport and wearing a wig, was accompanied by a man, who carried out the robbery of fine wine in the early hours of last Wednesday

‘It was the man who carried out the robbery. This was a very clean professional job, I think the couple had been hired to do the robbery,’ Polo told Decanter.

He explained that Spanish forensic police from Madrid together with local police were investigating the crime in which more 45 fine wines were stolen.

During the night the couple rang reception asking for for food. The robbery occurred whilst the receptionist made a salad and dessert for the couple at around 1.30am.

‘Security cameras show how the man stole the wine and but it into a bag before the couple left the hotel in the morning,’ Polo said.

‘They were able to break open the magnetic locks on the doors of the cellar,’ he added.

The couple, who spoke English with a ‘notable accent’, ate at the restaurant; ‘they were very polite and well dressed’, said Polo.

The nature of the fine wine robbery has raised eyebrows in many quarters of the wine trade.

‘This amount of wine would be very heavy to carry and move, even when put in bags, and to think they just walked out of the hotel with this number of bottles is odd,’ said one industry source who wished not to be named.

Meanwhile Polo told Decanter that the stolen wines had been insured prior to the robbery. ‘More than the bottles of wine, they robbed our dreams,” he said.

Home Videos The WORLD of WINE – Wine News. Cheap wine, tasting notes and cooking with wine The World of Wine – May 2021 … END_OF_DOCUMENT_TOKEN_TO_BE_REPLACED

How to visit Napa Valley on a Budget. In this video Carson and I explain a few ways to enjoy Napa on the cheap. Tip and advice about how to visit Napa … END_OF_DOCUMENT_TOKEN_TO_BE_REPLACED

Home Videos Get To Know Argentina Wine | Wine Folly If you love Malbec, Argentina is your ultimate wine region. But that’s not … END_OF_DOCUMENT_TOKEN_TO_BE_REPLACED