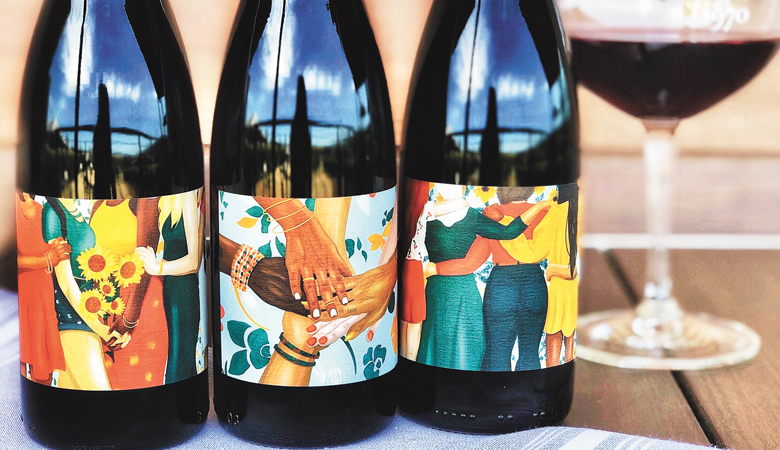 For many people, the death of George Floyd represented a turning point in awareness. Anna Maria Ponzi, president of Ponzi Vineyards, felt much the same. Although her family has always been community- and justice-minded, his horrific death and the broader implications left her feeling called to do more. And when she watched the young protestors working tirelessly to counter injustice, she also knew “something more” couldn’t be simply a check and moving on.

“We’re women-owned and sister-owned, but we’d never done anything specifically for women,” Ponzi said. “We needed to do something more to support women and, beyond just supporting women, women of minority.”

She and her sister, winemaker Luisa Ponzi, conceived the idea of producing a special 375ml bottling of 2017 Pinot Noir. Each bottle is adorned with one of three labels designed by Sheree Brand, an artist based in Washington, D.C. All proceeds from the “Together” series, which can be purchased individually or as a three-pack with each label, will be donated monthly to a different charity.

The first beneficiary, SisterLove, champions reproductive justice issues in the U.S. and abroad. “We’ve reached out on social media and asked for ideas, and we’re creating a very long list of potential nonprofits to support in the future,” said Ponzi. “It’s been a real awakening for us to see how many organizations are out there helping women of minority.” Although “Together” was sparked by Floyd’s death, Ponzi says it was the protestors — many the same age as her and Luisa’s children — who really ignited a flame. “We really became very inspired by this generation that is being so resilient and forthcoming, with not only protesting the inequities facing Black people and people of color, but also their way of enlightening us and educating (older generations),” she said. “For many of us who are white, it was really a moment to listen and learn, and we took that very seriously.”

Several other Oregon winemakers are using wine as a tool for supporting social justice organizations. Remy Wines owner/winemaker Remy Drabkin is currently selling her 2019 Black Heart Sparkling Blanc de Noir to raise money for the ACLU of Oregon. She created the name and label concept in 2019, a year that held a lot of personal tragedy for her. When the Black Lives Matter protests sparked, she didn’t want to appear to be co-opting a symbol that had taken on a different meaning for many people.

“We recognize that when any one person is oppressed, we’re all oppressed,” she said. “We paused to think about how we wanted to release the Black Heart label and do it thoughtfully. Recognizing the importance of supporting Black Lives Matter, we picked the ACLU as the right organization.”

Suzor Wines’ Ensemble 2015 Pinot Noir was originally created to raise money for Family Meal, which is helping workers affected by the COVID-19 pandemic. But at that organization’s suggestion, owners Mélissa Rondeau and Greg McClellan set aside a portion of the proceeds specifically for the Black Food Sovereignty Coalition.

Taylor Pfaff, CEO of Left Coast Estate, set a goal of making wine more accessible to people at all income levels and contributing to the community at the beginning of the pandemic. Through the Pinot for the People campaign, consumers can purchase the 2017 Cali’s Cuvée Pinot Noir for a minimum of $12. Those who choose to pay up to the suggested retail price of $24 can request that the additional money be donated to one of five nonprofits, including the NAACP and The Sentencing Project.

“With the recent protests for social justice, I think every winery in Oregon is talking about what can we do and how can we help,” said Pfaff.

Wine as a fundraiser for human rights organizations is one small but welcome step to create a more equitable world.

Home Videos The WORLD of WINE – Wine News. Cheap wine, tasting notes and cooking with wine The World of Wine – May 2021 … END_OF_DOCUMENT_TOKEN_TO_BE_REPLACED

How to visit Napa Valley on a Budget. In this video Carson and I explain a few ways to enjoy Napa on the cheap. Tip and advice about how to visit Napa … END_OF_DOCUMENT_TOKEN_TO_BE_REPLACED

Home Videos Get To Know Argentina Wine | Wine Folly If you love Malbec, Argentina is your ultimate wine region. But that’s not … END_OF_DOCUMENT_TOKEN_TO_BE_REPLACED