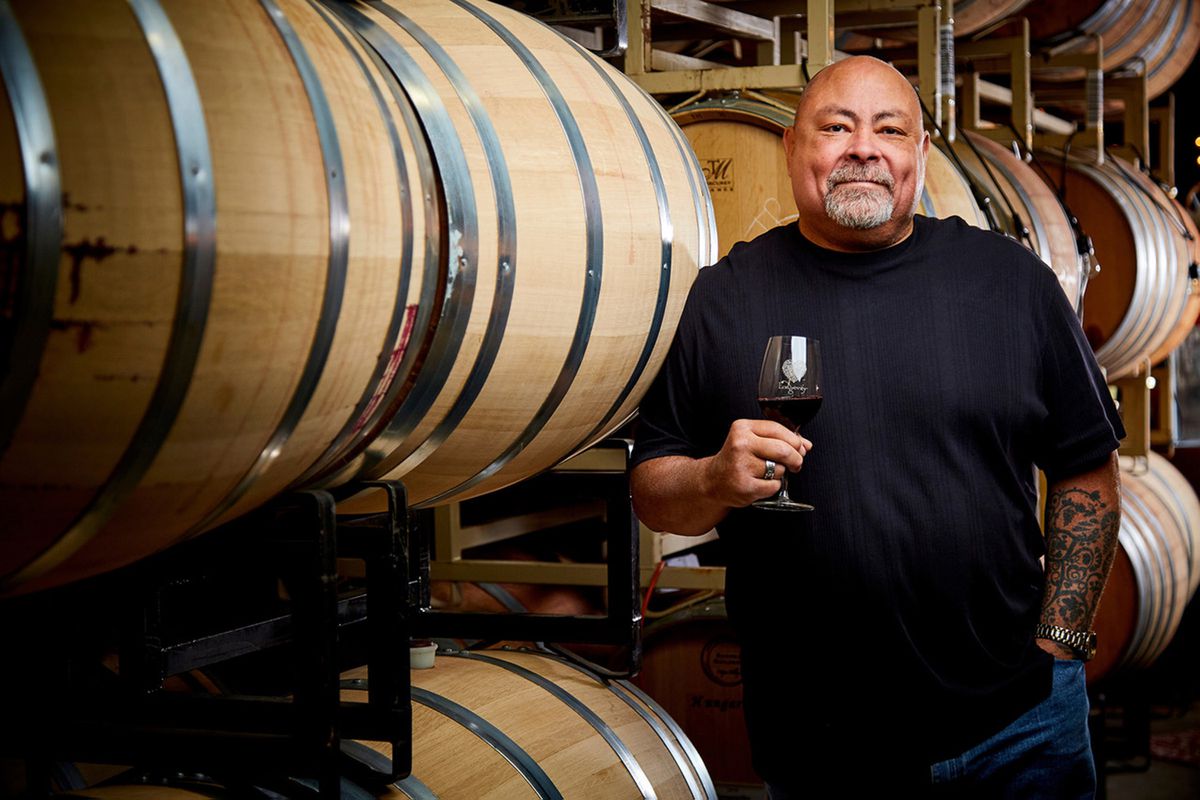 Phil Long had just returned from his grandmother’s funeral when he stopped by his winery on a Sunday to do a little work.

Alone, he was moving a full stack of 125-lb. empty barrels on a pallet jack when the one on top fell off onto his head. When his wife came across him, he was unconscious and temporarily paralyzed from a compressed spinal cord. Long was in an intensive care unit for a week and rehab for three more weeks but recovered.

One would think that such a life-threatening experience would give him pause, but as it turns out, Phil Long has a hard head.

The winemaker, who got his start in 2006 making Longevity Wines syrah out of his California garage, has drawn on his stubbornness to head-butt his way through a bevy of challenges.

First, he’s an African-American winemaker struggling for a foothold in a largely white business. Second, he tragically lost his wife and business partner to pancreatic cancer in 2019 just as they were building the brand. Third, he launched a partnership with Bronco Wine Co. just as COVID-19 closed down his tasting room and blunted a national expansion.

All of this confronted a self-starter who plowed his way to ultimate success without following the normal career path of first getting a viticulture/enology degree or at least growing up in a family that liked wine.

“When I was growing up I didn’t know the industry was an option… I was literally in college and didn’t even know wine was made in this country. The only thing I knew about wine was a four-foot bottle of chianti in my dad’s corner of the dining room,” he said in a phone interview. “A disadvantage in this culture is not being exposed to (wine).”

But Long has followed his palate and said he a sponge for learning. He selects the grapes, works with the growers, and is constantly evaluating his wine. He’s done so well under these trying circumstances that he was named Livermore Valley Winery of the Year in 2018.

His production, under Bronco, has soared from 10,000 cases last year to hopefully 100,000 cases this year — not bad for a guy who made 3,000 cases of wine in his garage. This spring Longevity chardonnay and cabernet sauvignon will be sold at 270 Sam’s Clubs — an achievement in itself.

Now president of the Association of African American Vintners, he is helping to make wine a career choice for new generations in the Black community.  The association, founded in 2002, has more than 140 members, 30 to 40 of whom are winemakers. The affiliations include celebrities such as John Legend and Charles Woodson.

Maryland, too, has a winery owned by African-Americans. Denise Matthews and Kimberly Johnson have partnered to make wine in Baltimore County.

Started in 2018, Philosophy Winery released its first wine in September — a rosé made from Maryland grapes that is nearly sold out. They plan to release a viognier and cabernet franc in April. Besides making wine, they sponsor a mentorship program for young women interested in a career in wine.

Long said African-Americans face the same challenges as anyone who starts a wine business, but he sensed an additional problem when he walked into tasting rooms and was often ignored.

He said his worst experience was in a Santa Barbara tasting room where a woman was talking to a customer on the phone and didn’t even acknowledge him, the only customer. Neither did another woman who came into the room to listen to the phone conversation.

He walked out.  From that, he and his wife “got a leg up on how to treat people,” he said.

Although sales dipped when COVID struck, they bounced back with vengeance when the Black Life Matters movement drew support for Black-owned businesses. Longevity Wines was included on a list of Black-owned wine brands that went viral.

“When Black Life Matters happened, we saw an increase in online sales. We sold more wine in the first two weeks of June than the entire year of 2019,” Long said.

Some of Longevity’s wines are sold only online, but Bronco distributes the chardonnay and cabernet sauvignon under the Classic label with plans to soon distribute a rosé and sparkling wine before year’s end. He gets his grapes from Livermore vineyards for the 14 wines sold at the winery; those distributed nationally are made from vineyards owned by Bronco’s Franzia family and have a California appellation.

Get the scoop on that new restaurant, learn about chef changes and discover your favorite new recipe. All your Baltimore food news is here.

The 2018 Longevity California Chardonnay ($16) shows a lot of tropical fruit aromas and flavors of honeydew and citrus. A bit of viognier gives a boost to the aromatics.

The 2017 Longevity California Cabernet Sauvignon ($16) is another good value. Blended with a bit of arinarnoa – a cross between merlot and petit verdot bred in Bordeaux in 1956 – the wine has an earthy expression with dark cherry and cassis notes, soft tannins and oak-inspired hints of chocolate and vanilla.

The heart-shaped logo on the labels of these bottles, designed by Long, is a tribute to his wife, Debra, whose collection of glass hearts was part of a rebranding effort before her death. He also has a heart-shaped tattoo on his arm so that “she will always be with me.”

Cameron Hughes Lot 673 Russian River Valley Pinot Noir 2018 ($15). This winery, no longer owned by its namesake, buys grapes from top producers who for whatever reason don’t need them. It does so with the promise that it will not reveal his source. The result is often great wines at low prices. We like this light and frisky pinot noir with classical cherry flavors and a hint of mushrooms. There’s nothing serious here, but there is indisputably a lot of pretty fruit character that surpasses the price point.  Available on line only.

Home Videos The WORLD of WINE – Wine News. Cheap wine, tasting notes and cooking with wine The World of Wine – May 2021 … END_OF_DOCUMENT_TOKEN_TO_BE_REPLACED

How to visit Napa Valley on a Budget. In this video Carson and I explain a few ways to enjoy Napa on the cheap. Tip and advice about how to visit Napa … END_OF_DOCUMENT_TOKEN_TO_BE_REPLACED

Home Videos Get To Know Argentina Wine | Wine Folly If you love Malbec, Argentina is your ultimate wine region. But that’s not … END_OF_DOCUMENT_TOKEN_TO_BE_REPLACED