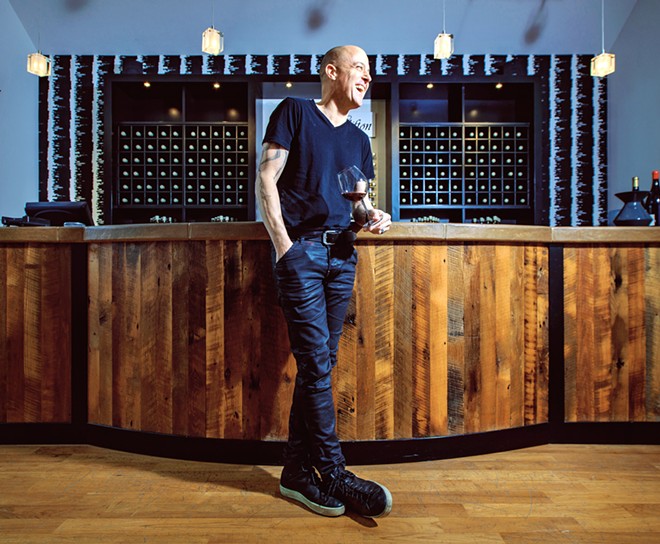 “I’ve been reflecting a lot on my relationship with this place,” the Brewer-Clifton winemaker said. “I’m very loyal to this place. I’m very provincial in that way. I’ll always work here. I’ve only worked here.”

He describes his relationship with the Santa Barbara County region as akin to working with someone for three decades. It’s an intimate relationship, and as a result, Brewer said, he’s been able to be kind of naked and exposed in how Brewer-Clifton grows and makes wine, doing as little as possible during the process so the wines can reflect the Sta. Rita Hills.

“It’s really about not inserting oneself,” he said. “It’s being as gentle as we can, and ultimately, I guess, allowing things to be what they’re going to be.”

The process at Brewer-Clifton is disciplined, trusting of the systems that are in place. Brewer doesn’t modify or tweak the wine as it’s developing; his crew doesn’t disturb the wine or add anything to it. The end result is going to be the result, Brewer said.

Recently picked as Wine Enthusiast‘s 2020 Winemaker of the Year, Brewer and his efforts to showcase the region haven’t gone unnoticed.

“Greg is one of the most talented and dynamic winemakers in California today with his distinctive style of coastal-influenced pinot noirs and chardonnays that rank among some of our magazine’s most highly rated bottlings. More importantly, he’s been a champion of Santa Barbara wines and helped build the prestige and excitement for the Sta. Rita Hills wine-growing region,” Wine Enthusiast Publisher Adam Strum said, according to Wine Industry Network Advisor.

The 8-mile stretch of land that runs between Buellton and Lompoc was the second designated American Viticultural Area (AVA) in Santa Barbara County. This area is mostly dedicated to chardonnays and pinot noirs, and its proximity to the Pacific Ocean influences the vines with fog-filled mornings and evenings.

Brewer describes it as a land of juxtaposition, a rugged coastline that gives way to hills and dales. It’s all about the ocean—both contemplative and savage in the same instant.

“We’re in this kind of gentle climate that’s predictable, and at the same time, it’s cold and desolate and stark,” he said. “There’s tension in [the wines]. There’s that oceanic kind of drive and force within them.”

When Brewer was 21 years old, he started working at the Santa Barbara Winery tasting room as a way to make extra money while he was in grad school for French literature and also teaching French at UC Santa Barbara. That was in 1991. By the end of 1992, he was the assistant winemaker, leaving grad school and his desire to teach French behind. Bruce McGuire, who’s been the winemaker at Santa Barbara Winery for four decades, showed Brewer the ways of wine in a budding industry.

Back then, Brewer said, there were only four or five wineries in the region. Now there are thousands of acres of vines planted and hundreds of wineries with corporate, mom-and-pop, and foreign investors. Then, of course, Sideways came out and really put Santa Barbara County on the wine map.

“It’s been really beautiful to see it play out,” he said.

Brewer started Brewer-Clifton in 1996, meeting up with Ron Melville in 1997 to help build Melville Winery, where Brewer made wine for 18 years. Around that same time, Sta. Rita Hills winemakers came together to push for AVA recognition. In discussing what the appellation could be, Brewer said, several folks pushed for specialization: chardonnays and pinot noirs.

California’s growing regions are diverse, and Santa Barbara County has so many micro-climates, producing so many different wine varieties, Brewer said they wanted to be sure they stood out.

Wine lists all around the world include a section on the Sta. Rita Hills. About 2,700 acres of chardonnay, pinot noir, and 18 other varieties now grow in the appellation, which boasts 51 wineries, according to the Santa Barbara Vintners.

Seven days a week, Brewer does the same thing in that AVA. Describing himself as similar to an old stereotyped sushi chef in Tokyo, he repeats the same process day in and day out, producing wines that can be themselves.

Jackson Family Wines purchased Brewer-Clifton in 2017, and Brewer stayed on as the winemaker. He said the Jackson family has been rooted in Santa Barbara County for many years and encouraged him to continue doing what he was doing—allowing him the space and financial leeway to go further than he could comfortably go in the past.

“The past 3 1/2 years have really been the best of my entire career,” he said. “I’ve never been more here, and there’s a long, cool future ahead.”

Receiving the Winemaker of the Year award, he said, is similar to what the Jackson family alignment means to him. With both he can continue to spread the word about the Sta. Rita Hills and its unique family of grape growers and winemakers—his neighbors who he both learns from and teaches.

While Brewer-Clifton aims to be as hands-off as possible, Brewer said, he of course makes decisions that impact the outcome. For instance: Brewer-Clifton trims its leaf canopy so there’s a lot of airflow around the fruit. They choose the right time to harvest and pick their grapes at night. He uses a commercial yeast strain and ages the wine in 15- to 25-year-old barrels. But, Brewer said, it’s all very elementary. Brewer-Clifton isn’t about flexibility; it’s efficient, rhythmic, and ritualistic.

The process is preventative, said his wife, Sonja Magdaveski, who makes wines for Casa Dumetz in Los Alamos. Nothing is arbitrary and everything is preparation. She said that Brewer knows what his goals are and he knows that he wants to be as light and quiet as possible in order to allow the grapes to do the talking. 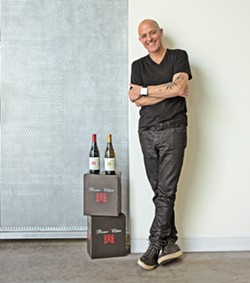 He trusts the Sta. Rita Hills to deliver. He’s inspired by what they can do, and he knows what he needs to do to enable the grapes to do the right thing.

“It’s really about being so prepared and so aware and so in tune that you can be quiet and disciplined and not rush into making arbitrary decisions,” Magdaveski said. “You walk into that winery any day of the year and it looks exactly as it did yesterday and last year and many years from now. … And to fight the need to not go with every twist of the market, which is so volatile.”

Magdaveski said Brewer’s process yields wines that have a similar character, an energy to them that’s consistent and connected—the energy of the Sta. Rita Hills, the energy of Brewer himself. It’s not so much the flavor profiles that are distinct as it is the intention and texture of the wines.

“There’s a density of character in the wines that Greg makes that are like no other,” she said. “It’s totally impossible to express, and once you’ve had it, and you’ve had many, it’s a very specific characteristic.” Δ

Editor Camillia Lanham is ready for some pinot noir with character. Send tasting notes to clanham@newtimesslo.com.

Home Videos The WORLD of WINE – Wine News. Cheap wine, tasting notes and cooking with wine The World of Wine – May 2021 … END_OF_DOCUMENT_TOKEN_TO_BE_REPLACED

How to visit Napa Valley on a Budget. In this video Carson and I explain a few ways to enjoy Napa on the cheap. Tip and advice about how to visit Napa … END_OF_DOCUMENT_TOKEN_TO_BE_REPLACED

Home Videos Get To Know Argentina Wine | Wine Folly If you love Malbec, Argentina is your ultimate wine region. But that’s not … END_OF_DOCUMENT_TOKEN_TO_BE_REPLACED