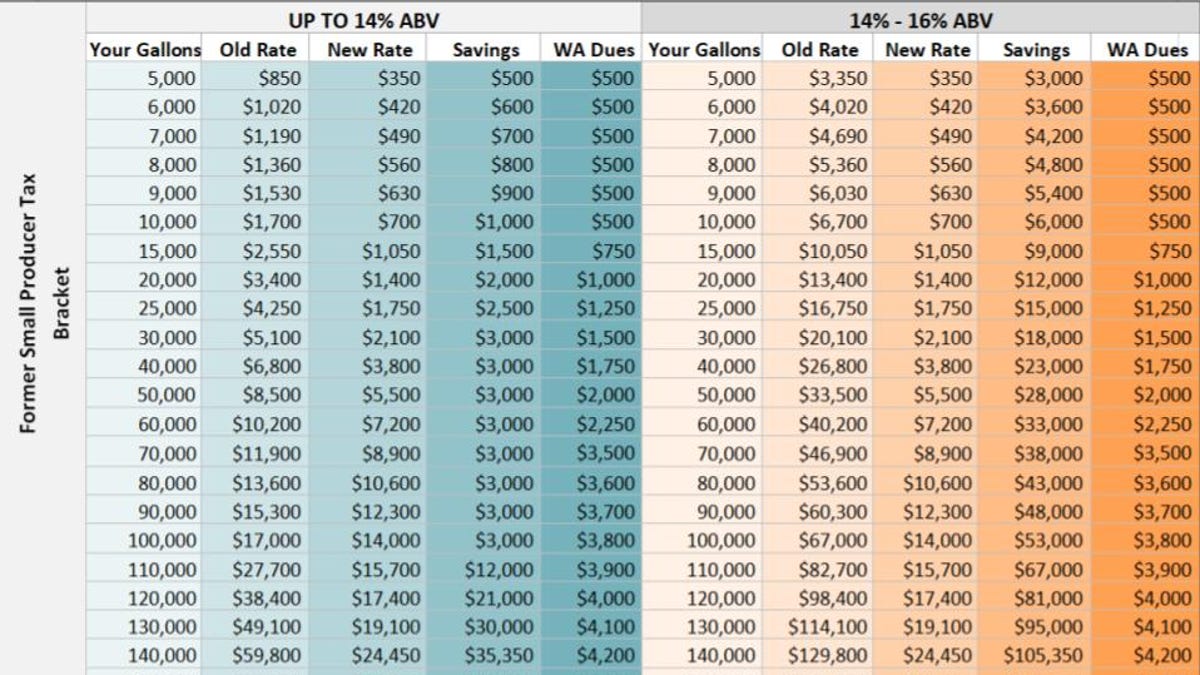 WASHINGTON, D.C. – We finally got to say goodbye to 2020, a year like no other, but we can also raise a toast to some major accomplishments in just the past week. The reduced excise tax rates are now permanent … the TTB revised standards of fill to be more can-friendly … USDA dietary guidelines stayed the same … and the Covid relief bill includes more PPP with better conditions.

The Big Gift: Permanence at last

It only took five years. The reduced tax rates under the Craft Beverage Modernization and Tax Reform Act (CBMTRA) are now permanent. So you may now plan the future of your business with certainty, at least in terms of federal excise tax rates.

After more than five years of work, WineAmerica and our beverage coalition partners were able to get Congress to make permanent the Craft Beverage Modernization and Tax Reform Act, which lowered excise taxes for all American wineries starting Jan. 1, 2018.

They were set to expire on Dec. 31, which would have meant higher excise taxes, but Congress voted on Dec. 21 to make them permanent. Phew!

But then days of tension followed, as the president waited nearly a week after passage to sign the umbrella legislation which included the CBMTRA and much else. Everything was combined into one massive (5,593-page, $2.3 trillion) omnibus spending bill, which included the $1.4 trillion national budget through September 30, a $900 billion Covid relief bill, and permanence for our Craft Beverage Modernization and Tax Reform Act. The combination finally brought some stability, sending the stock markets soaring.

WineAmerica worked on the CBMTRA for over five years, and we could do so only because our members supported the organization financially. They, and all other wineries, have saved a lot of money since Jan. 1, 2018, and now those annual savings will become permanent. The chart shows the differences between the old rates and the new rates (under CBMTRA), along with WineAmerica dues levels, which are generally miniscule compared with the savings, especially for wineries producing higher alcohol wines.

We are very grateful to our loyal members, and invite all others to become involved by joining. We still have a lot of work to do, but we need your help to help you. Visit www.wineamerica.org/membership. The CBMTRA rates are now permanent, and here are your savings.

TTB, USDA, PPP The last week of 2020 turned out to be a good one for the wine industry, even beyond the CBMTRA permanence.

The Tax and Trade Bureau unveiled revised “standards of fill,” including three new sizes – 355, 250, and 200 milliliters – which will make wine in cans more cost-effective than before. In July, Senator Chuck Schumer, the Minority Leader from New York, visited Fox Run Vineyards (which sells wine in cans) to announce that he had sent a letter to the Tobacco Tax and Trade Bureau (TTB) requesting this, and now it’s in effect. No longer will wineries have to pay extra for custom-sized cans.

Following nearly a year and a half of advocacy on behalf of New York’s wineries, Schumer recently announced the TTB has decided to lift the unnecessary restrictions preventing vineyards from selling wine in normal, regular sized cans. Schumer noted that just in the last year, canned wine sales have grown by 68%, indicating that the popular wine trend is showing no signs of slowing down, and said that as the new year approached, the change allowing greater flexibility in Standards of Fill regulations would crack open opportunities for New York’s wine producers to sell wine in traditional, readily available can sizes of 12 oz. and 8.4 oz. and to maximize on the nearly $200 million market.

“Although it was already a heavy-hitter, New York’s $4.8 billion wine industry was left hanging on the vine by TTB’s outdated rules and restrictions,” quipped Schumer. “Today’s decision to allow winemakers to sell their products in the most popular-sized cans will lead to further economic growth and allow producers to capitalize on an explosive trend. I’m proud to have helped New York’s wine industry cut through the bureaucratic red tape, can regulations that weren’t helping anybody, and uncork the full potential of the Upstate economy.”

Earlier this year, the United States Department of Agriculture unexpectedly proposed changing recommendations involving alcohol consumption in the longstanding Dietary Guidelines for Americans. For decades, two daily drinks for men and one for women were the guidelines, but they wanted to drop both to one drink — without any scientific or medical justification for the change.

Ultimately, they kept the two and one levels, noting that there wasn’t enough information to warrant the change. Duh! So who recommended it in the first place, and why?

About a month ago, the IRS said that forgivable loans under the Paycheck Protection Program would be treated as taxable income, which was never the law’s intention. Fortunately, the new Covid relief bill not only clarified that, but specifies that any business expenses paid with forgivable PPP loans would be tax-deductible. That applies to previous PPP loans as well as any new ones, and businesses may apply for a second loan if they meet the basic criteria.

These three items are great examples of what WineAmerica does on a daily basis – advocating on issues which often fly under the radar but affect the industry nonetheless. Our Washington staff is fully engaged not only with Congress and the Administration, but also with the agencies involved and our beverage coalition partners. Enjoy the benefits! Cheers!

Jim Trezise is president of WineAmerica.

Home Videos The WORLD of WINE – Wine News. Cheap wine, tasting notes and cooking with wine The World of Wine – May 2021 … END_OF_DOCUMENT_TOKEN_TO_BE_REPLACED

How to visit Napa Valley on a Budget. In this video Carson and I explain a few ways to enjoy Napa on the cheap. Tip and advice about how to visit Napa … END_OF_DOCUMENT_TOKEN_TO_BE_REPLACED

Home Videos Get To Know Argentina Wine | Wine Folly If you love Malbec, Argentina is your ultimate wine region. But that’s not … END_OF_DOCUMENT_TOKEN_TO_BE_REPLACED