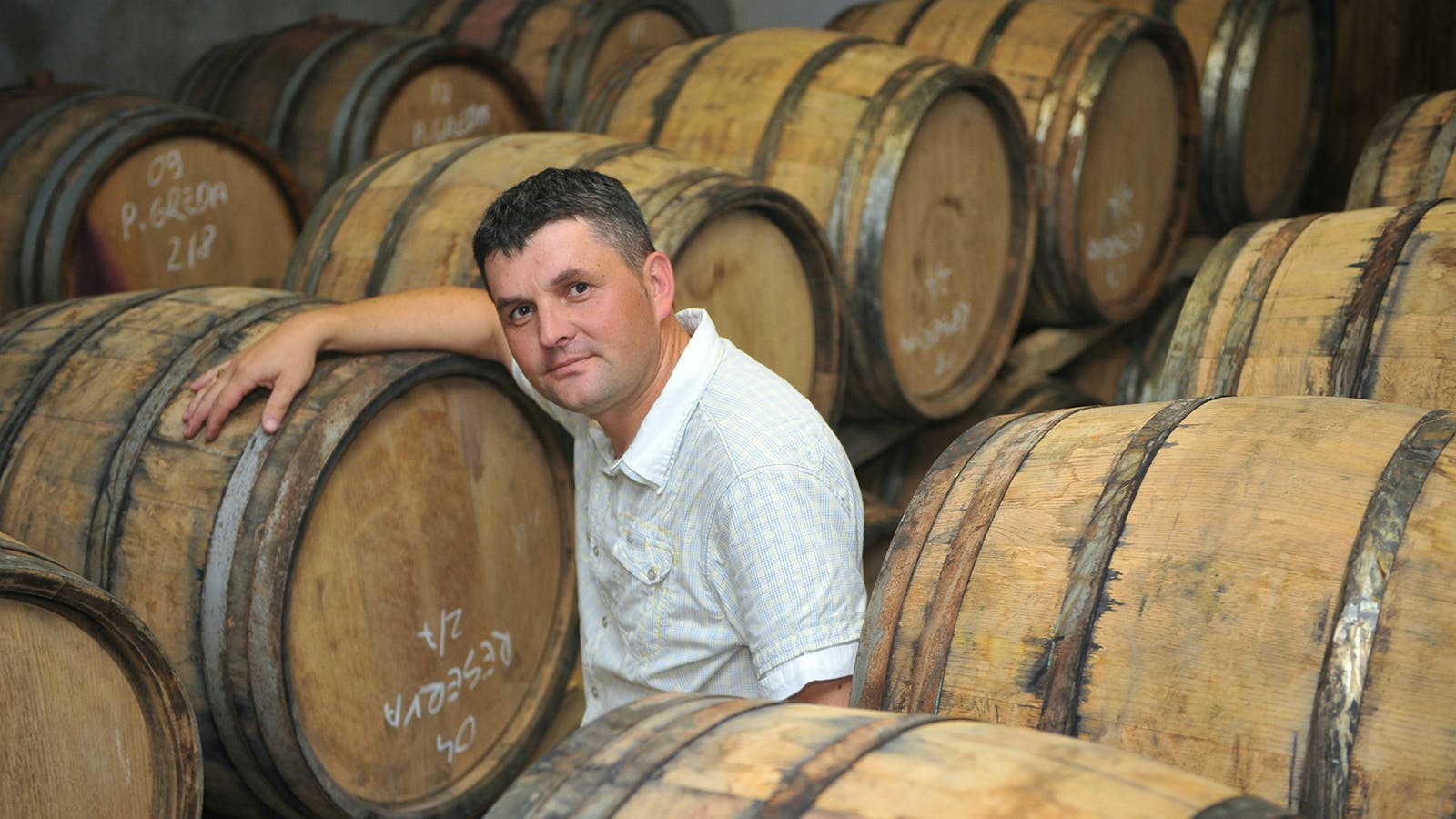 Just over 25 years ago, American diplomacy helped end almost four years of war in Bosnia and Herzegovina, the bloodiest conflict in Europe since World War II, one marked by ethnic cleansing and war crimes. During the fighting, which culminated in the breakup of Yugoslavia, more than 100,000 people were killed and more than 2 million displaced. The U.S. and NATO brokered an imperfect but vital peace in November 1995 at an Air Force base in Dayton, Ohio. Since then, the country has struggled to recover.

For winemaker Josip Brkić, the adversity of war in his homeland means he is little fazed by a challenging growing season or the difficulties of bringing his wines to market. He recalls the shells that fell on his hometown, Čitluk, in the country’s southwest, as his first vintage of wine awaited delivery in 1992. “All the money I had lay in the back of that truck,” he said. Fortunately the consignment made it to market.

A history of resilience

Čitluk lies in the southern part of Herzegovina, in a mountainous region known for its limestone soils. Brkić marvels a bit at how he kept things going in the dark times. Peace did not instantly bring prosperity.

“After the war it was very difficult to be a small producer,” Brkić recalled. “We had a lot of technical problems with electricity and water, and there was no company to print labels. All our equipment had to be imported from Italy at great expense.” As a result, many of the new post-war producers quickly fell by the wayside, leaving the lumbering state-owned wineries—a relic of Communist Yugoslavia—to pursue quantity over quality as they had nearly always done.

Though fewer acres are cultivated today than prior to the war, there are clear signs of a revival in the country’s wine industry. Domestic per capita wine consumption has more than tripled in the past 15 years, though it remains low compared to the E.U. average, and the “Herzegovina Wine Route” has helped showcase domestic wines to an ever-expanding tourist market.

While many winemakers still cultivate their small vineyards for personal consumption or to barter with, some have expanded into international markets. Despite a lack of access to capital and little industry support, producers such as Brkić are beginning to prove that they are “making real, honest wines,” as he puts it.

The viticultural heritage of Herzegovina, where most of the country’s annual 2.2 million cases of wine is produced, can be traced back to Roman times. The area saw a wine renaissance after the Austro-Hungarian Empire conquered the land from the Ottomans.

Some 50 different varieties were once cultivated here, before locals deemed Žilavka (pronounced “zhee-lav-ka”) and Blatina the most suitable, given the region’s Mediterranean climate and Karst limestone–rich soils. The former is a white variety renowned for its freshness and acidity; the latter a red grape that delivers spice and coffee-tinged flavors.

In recent centuries, vintners often sourced vine cuttings from the most renowned vineyard, known as Carski Vinogradi, or “Imperial Vineyards,” located near the source of the Buna river just outside Mostar. Local authorities provided viticultural education and supported new technologies.

Brkić tends some of his Žilavka at his estate. He makes several different wines from the variety. (Irfan Redzovic)

When Bosnia and Herzegovina was part of socialist Yugoslavia, wine production was centralized. In 1979, Josip’s father, Paško, established one of the country’s first private vineyards on Čitluk’s rolling plains. At that time, only state-owned companies were permitted to market their wine; private producers could only sell in clear, unmarked bottles, without their own brand.

After Paško’s death in 1989, Josip took the reins, becoming one of the country’s youngest winemakers. Only three years later, however, Bosnia and Herzegovina descended into violence. As fighting encroached, Brkić and his family lived with fear, uncertainty and shortages.

“War in Herzegovina was quite brutal,” said Brkić. “I spent the entire war as a soldier, while at the same time working in the vineyards. I managed to save the vineyards, although some were directly affected by the shelling.”

With few signs of a cessation of hostilities, Brkić released his first wine bottled under his own label in 1994. Getting his wines to the capital, Sarajevo, which was under constant siege by Serb forces, required dangerous journeys over Mt. Igman. The narrow, winding road over the mountain was the only way into the besieged city. Three American diplomats in a French armored vehicle tragically died on the same road in 1995. As Brkić cautioned, “It is very difficult to explain to someone who has not lived here.”

Finding success and listening to vines

As an uneasy peace settled on the country, Brkić fought to achieve his goal, “to find my place in the world of wine.” He would receive orders late in the evening and would fulfill them himself the next morning, having “worked all night to make everything ready for delivery.”

In the past 15 years, Brkić has felt secure enough to experiment in both his cellar and vineyards. During a 2006 visit to an Italian wine fair, he encountered biodynamic farming philosophies. They had a profound impact on him. “Your entire life you see the hill in front of you and never ask what is beyond it, only to discover that there is an entire new world. That means you can’t go back.” In 2007, he produced his first vintage of Mjesečar (the name means “Moonwalker”), the first wine he produced using biodynamic techniques.

But over time, Brkić’s views evolved and he became more skeptical of biodynamics founder Rudolf Steiner’s dogma. Now he strives to find his own way. “I don’t agree with a lot of his ideas,” he said. “Of course, naturalness in wine is still a priority, but the methods are different. Now I listen more to my feelings and follow my ideas.”

One idea he’s trying in the cellar is aging wine in barrels made from trees near the vineyards. Brkić ages most of his white wines on the lees in 250-liter Bosnian oak casks made from trees grown near Bugojno and Kupres, about 80 miles north of Čitluk.

Brkić’s only red, Plava Greda, is an 85-15 blend of Blatina and Vranac. It’s aged in a mix of American, Hungarian, Slavonian and Bosnian oak casks.

Peace has brought expanded markets for Bosnian winemakers. Consumers in Europe and the U.S. now buy more than 60 percent of Brkić’s current production, and he sees more opportunities for the region’s indigenous varieties. But while international recognition grows, domestic preferences continue to favor foreign wines, and government support is almost non-existent.

He hopes the people of Bosnia and Herzegovina will continue to enjoy peace and discover the complexity of the wines made within the country’s borders, perhaps raising a glass of Žilavka or Blatina to a future without war. It is, after all, a country where people “struggle for their happiness,” he said, “and do not surrender easily.”

Ian Bancroft is a writer and diplomat based in the Balkans. He is the author of Dragon’s Teeth: Tales from North Kosovo.

Home Videos The WORLD of WINE – Wine News. Cheap wine, tasting notes and cooking with wine The World of Wine – May 2021 … END_OF_DOCUMENT_TOKEN_TO_BE_REPLACED

How to visit Napa Valley on a Budget. In this video Carson and I explain a few ways to enjoy Napa on the cheap. Tip and advice about how to visit Napa … END_OF_DOCUMENT_TOKEN_TO_BE_REPLACED

Home Videos Get To Know Argentina Wine | Wine Folly If you love Malbec, Argentina is your ultimate wine region. But that’s not … END_OF_DOCUMENT_TOKEN_TO_BE_REPLACED