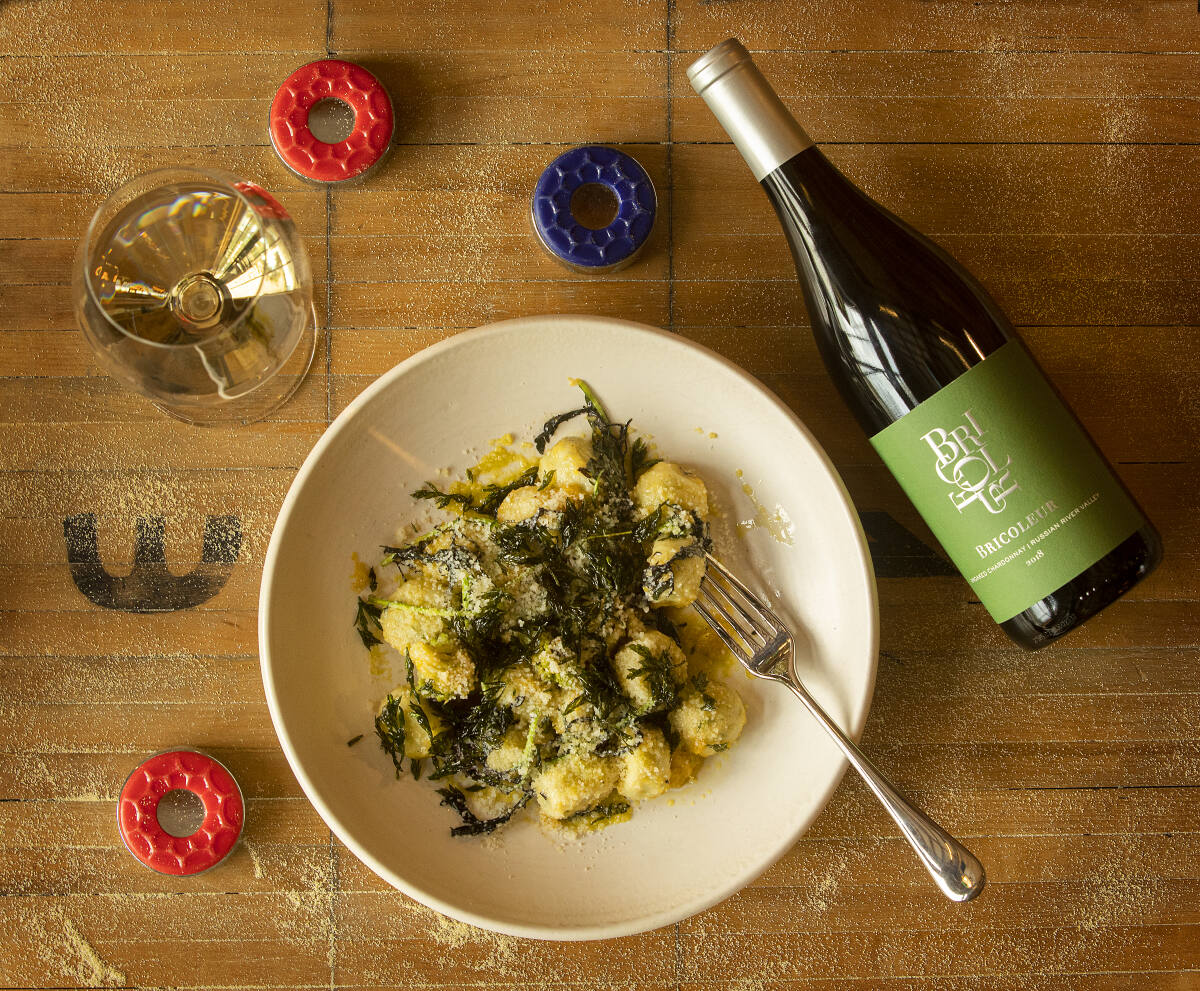 Class participants receive a list of ingredients and the recipes so they can follow along at home. McAnelly already has planned out classes for all of 2021, and participants can order the paired wines ahead of time for specific months.

“In the beginning, I was surprised that 50% of the people who took the class on Zoom were actually cooking,” he said. “This Zoom thing allows us to connect with our wine club members all over the country.”

Despite the pandemic and fewer visitors to the winery, wine club membership has grown from a couple hundred to 1,000, according to Richard.

Although located just a few miles southwest of downtown Windsor, the 42-acre winery on Starr Road feels a world away from modern life, with 360-degree views of rolling hills dotted by cattle, horse farms and vines. The winery has 20 acres planted to grapes, about half an acre of produce gardens and 250 olive trees that supply Spanish varietals for an estate olive oil.

Other landmarks include an old stone milk barn renovated into an apartment where wine club members can stay, a sprawling villa, a couple of ponds, an outdoor pavilion for tastings and dinners, a rose garden and a bocce ball court. There is also a coop for the chickens, which supply fresh eggs to the kitchen.

“I enjoy the picnics because guests can experience the entire property,” McAnelly said. “They can eat in the pavilion or the bocce ball court or the rose garden.”

The French word bricoleur (bree-ko-LER) refers to “one who starts building something with no clear plan, adding bits here and there, cobbling together a whole while flying by the seat of their pants,” hence the name of their second label.

Bricoleur Vineyards was founded by Mark and Elizabeth Hanson and daughter Sarah Hanson Citron, who all have roots in the North Bay. An entrepreneurial software and private equity executive, Mark was born in Santa Rosa and grew up in Marin. He serves as the CEO.

Elizabeth, who spent childhood summers on a ranch near Cloverdale, has worked in accounting, tax and real estate in San Francisco. She serves as the CFO.

Their daughter, Sarah, has worked for fashion houses such as Tory Burch, Helmut Lang and Theory and serves as the vice president of marketing.

“It feels like a startup, and everybody does everything,” McAnelly said. “Mark is the owner, and he’s often bussing tables and washing dishes.”

Because the winery is relatively new, the chef’s red wine choices for pairing have been limited so far to two pinots and a zinfandel. But that’s about to change in the near future.

“I’m excited because in the coming year, we’re going to have a cabernet sauvignon, petite sirah, red blend and syrah,” he said.

So far, his favorite wine for food pairing is the Kick Ranch viognier.

“Ours is nice and dry and truly delicious,” he said. “My favorite thing to do is to pair it with larb, a Thai dish made with vegetables from the garden.”

“We rubbed it with an Indian spice rub that had guajillo peppers, cumin, coriander, cinnamon, cardamom, garlic and ginger … warm flavors that are spiced but not spicy, ” he said. “We charred it on our plancha so that it had a really nice crust. I really like charred foods with the zinfandel.”

The following two recipes are from Shane McAnelly, executive chef and culinary director of Bricoleur Vineyards. The salad recipe is a simplified version of the Citrus Spiced Vegetables McAnelly serves on the Sip & Savor menu, where he pairs it with the Bricoleur Vineyards 2018 Kick Ranch Viognier.

“I make this style (of the dish) at home a couple times a month. It is really simple to throw together and pretty healthy,” he said. “You can add cooked ground pork, ground chicken, shrimp or tofu to add some protein to it and to make it more of an entrée.”

Fish sauce, a liquid condiment made from salted and fermented fish, is popular in East Asian cuisine. Most grocery stores will have it in the ethnic foods aisle.

1 sprig basil (Thai basil, if you can find it)

Home Videos The WORLD of WINE – Wine News. Cheap wine, tasting notes and cooking with wine The World of Wine – May 2021 … END_OF_DOCUMENT_TOKEN_TO_BE_REPLACED

How to visit Napa Valley on a Budget. In this video Carson and I explain a few ways to enjoy Napa on the cheap. Tip and advice about how to visit Napa … END_OF_DOCUMENT_TOKEN_TO_BE_REPLACED

Home Videos Get To Know Argentina Wine | Wine Folly If you love Malbec, Argentina is your ultimate wine region. But that’s not … END_OF_DOCUMENT_TOKEN_TO_BE_REPLACED