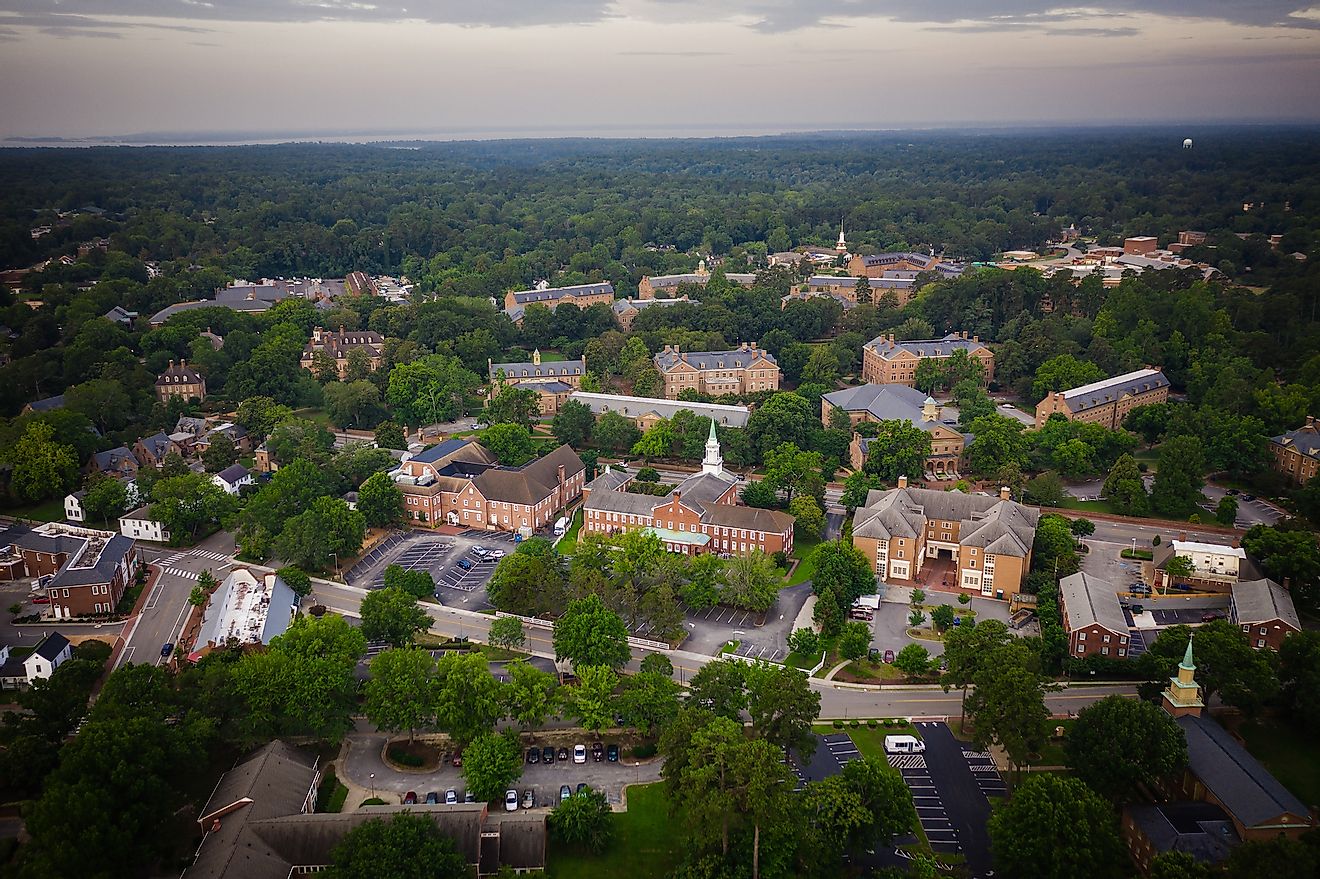 Historic Williamsburg, Virginia is located on a peninsula between the James and York Rivers near the Eastern seaboard. The city is best known for its thriving tourism and the superior restoration of colonial architecture that reflects the rich American history of the area.

The Colonial Parkway links Williamsburg with Yorktown (16 miles from town center) and the restored Jamestown settlement (just 5.5 miles away) making this one of the densest regions of colonial culture in the United States.

Colonial Williamsburg is a living history museum. Residents and workers of the plantations dress, act and depict the lifestyles of colonists from the 18th century. This Virginia city’s mild seasons provide a perfect climate for outdoor activities year round.

Williamsburg features well groomed suburbs, many with stately homes from the 1600 and 1700’s. This southeast area of the state is also home to nearby Norfolk, Newport News, Chesapeake, and Virginia Beach.

The local Williamsburg Pottery Factory and Outlets is Virginia’s biggest tourist draw. Anheuser-Busch established its large operation outside of Williamsburg. The company runs a brewery and two theme parks, Busch Gardens and Water Country USA, reside near the beer house.

The College of William and Mary was founded in 1693 in Williamsburg and is the nation’s second oldest educational institution after Harvard in Boston, MA. In 1781 British General Lord Cornwallis surrendered to George Washington at nearby Yorktown ending the War for Independence. Williamsburg is the home of American’s very first theatre. George Washington and Thomas Jefferson are both from Virginia.

This famous winery produces 25% of the wine in Virginia. The winery favorite vintage is Governor’s White. Tours and tastings are held year around. Decide whether you’d like a guided tour, a private reserve wine tasting, a tour and tasting with lunch provided, or visit the wine shop to purchase some excellent wine, sauces and spreads. The winery produces 60,000 cases a year on its 50 acres of vineyards. Wedmore Place, the Winery’s country hotel, offers spa services, romance and golf packages in combination with wine tastings and tours. The Gabriel Archer Tavern serves lunch year round and dinner in season with traditional and European fare in gracious colonial setting.

A visit to Colonial Williamsburg is a return to the historic first American colonies. The costumed interpreters depict the lives of those who came and helped shape the United States of America. Slaves, Native Americans, men and women colonists tell the stories of their lives and the challenges they faced. Immerse yourself in colonial Virginia at Bassett Hall and many other restored 1700’s homes and gardens. The Dewitt Wallace and the Rockefeller Folk Art museums are home to some of the richest collections of American artwork in the world. For more Virginia vacation adventures, the Jamestown settlement and historic Yorktown are just minutes away.

The amusement park located in Williamsburg is European themed. The entire park is divided into different European countries. Enjoy Oktoberfest in Germany, while celebrating the tradition of beer and enjoying German folk song and dance. After all, this is an Anheuser-Busch park! Endless thrill rides, roller coasters, and shopping areas provide entertainment. In the warmer months, visit the drive-thru wild animal park or visit sister park Water Country USA. Waterslides, the lazy river, and the ever popular flume spell fun for the whole family.

Home Videos The WORLD of WINE – Wine News. Cheap wine, tasting notes and cooking with wine The World of Wine – May 2021 … END_OF_DOCUMENT_TOKEN_TO_BE_REPLACED

How to visit Napa Valley on a Budget. In this video Carson and I explain a few ways to enjoy Napa on the cheap. Tip and advice about how to visit Napa … END_OF_DOCUMENT_TOKEN_TO_BE_REPLACED

Home Videos Get To Know Argentina Wine | Wine Folly If you love Malbec, Argentina is your ultimate wine region. But that’s not … END_OF_DOCUMENT_TOKEN_TO_BE_REPLACED