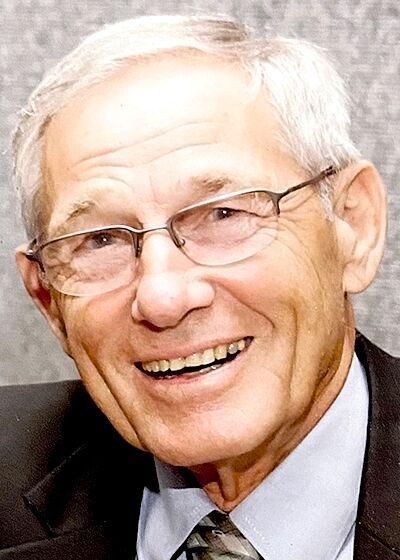 William (Bill) Harold Augspurger, the son of Harold and Bonita (Blasi) Augspurger was born March 20, 1933 in rural Pulaski, where he grew up with sisters Bonnie and Virginia. He entered Heaven on January 13, 2021, from complications of Lewy Body Disease.

Bill attended local schools in the Pulaski area and graduated from Pulaski High School in 1951. He served in the Air Force, stationed in Chandler, Ariz. from 1952 to 1956. It was here that Bill met his first love, Jean Maynes, a young woman from Bennington, Vt., and their adventure began. Returning to Iowa, Bill and Jean settled on the family farm and then moved to the house that Bill built in Bloomfield and created a wonderful life for themselves: they sailed, traveled, entertained, made friends, read, enjoyed University of Iowa sports, and raised their children.

After the untimely death of his first wife, Jean, Bill found love again with JoAnn Alderton who he married March 20 of 1992. Together they created a new adventure and embraced their love for genealogy, sailing, gardening, traveling, and family. They would often take off to explore graveyards and visit relatives, traveling all over the U.S., Canada and even Germany.

Along with farming, Bill was employed as a field appraiser for the Davis County Assessor’s office. He had an artistic and creative soul and there was nothing he couldn’t learn to do, build, or repair. Bill didn’t just dabble, he studied and learned, and applied his skills. He built sailboats, sourcing lumber locally and drying it in his home and melted lead over the kitchen stove for the keel. He used his artisan talents to build guitars and furniture, construct a house, heat a pool using solar energy, and took up pottery, building a kiln and wheel. He could restore a wrecked car one week and be baking bread or making wine the next from his home-grown grape vines. Blessed with a green thumb, his garden was his pride and joy where he enjoyed his nurturing talents. Bill was always learning and succeeded at anything he set out to do. Bill’s interests were as varied as his skills; he enjoyed painting, sailing, traveling, had a passion for genealogy, reading, photography, cooking, dancing, and music. He was truly a renaissance man of few words and many talents.

Bill was preceded in death by his parents, his wife Jean, infant daughter Katherine and his brother-in-law Donnel Berryman.

The family would like to acknowledge the care, support and guidance provided by Home Instead and Hospice. Memorials can be made to the Pulaski Mennonite Church, the Bloomfield Library/Genealogy, and the Bloomfield Methodist Church.

A private family funeral was held at 2 p.m. on Sunday, Jan. 17, 2021 at the Pulaski Mennonite Church with Pastor Ron Wenger officiating. The funeral was livestreamed on the Wagler Funeral Home Facebook page. Burial with military rites performed by Reed-Whisler Post #78 of the American Legion will be at the Pulaski Cemetery. A viewing without the presence of family was held from 1-1:30 p.m. on Sunday at the Church. Wagler Funeral Home in Bloomfield was in charge of arrangements and online condolences may be directed to www.waglerfuneralhome.com.

Home Videos The WORLD of WINE – Wine News. Cheap wine, tasting notes and cooking with wine The World of Wine – May 2021 … END_OF_DOCUMENT_TOKEN_TO_BE_REPLACED

How to visit Napa Valley on a Budget. In this video Carson and I explain a few ways to enjoy Napa on the cheap. Tip and advice about how to visit Napa … END_OF_DOCUMENT_TOKEN_TO_BE_REPLACED

Home Videos Get To Know Argentina Wine | Wine Folly If you love Malbec, Argentina is your ultimate wine region. But that’s not … END_OF_DOCUMENT_TOKEN_TO_BE_REPLACED