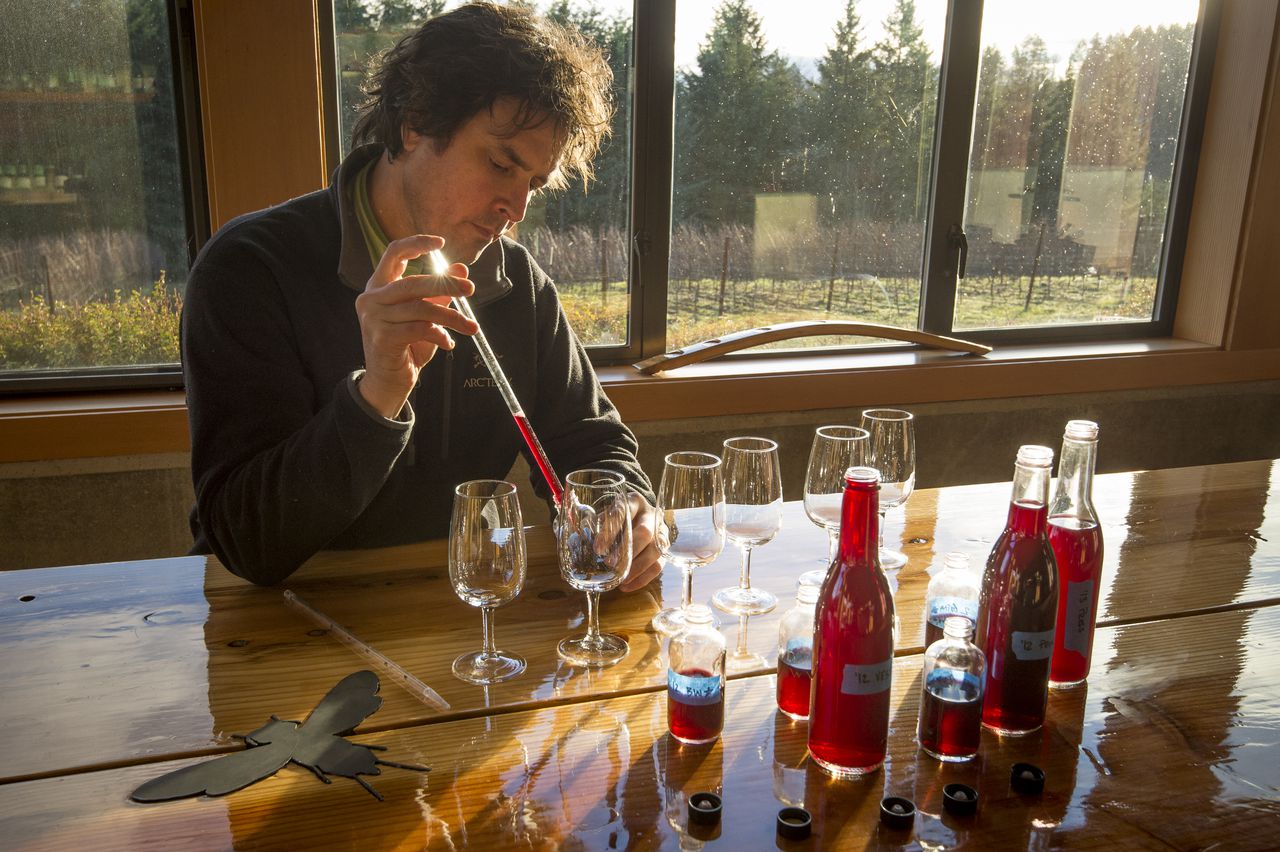 By Michael Alberty | For The Oregonian/OregonLive

Jim Prosser refused to raise a white flag to black smoke when the wildfires struck. He instead responded with what he describes as a “blueberry bomb” of a pinot noir named “Clarion.” It is a wine born of pure imagination.

Prosser was initially hopeful last September as prevailing winds pushed smoke from nearby wildfires out over the Pacific Ocean. Then, with harvest looming, the winds died, and the smoke reversed course.

“I’m not positive about everybody, but I’m pretty sure every grape in the Willamette Valley had some degree of smoke affectation,” Prosser said.

Only one rule appears on the wall at Prosser’s J.K. Carriere winery in Newberg: “make the wine first.” Wildfire smoke put that rule to the test in 2020.

“At first, we felt pretty good about it all, but then a couple of micro-ferments started showing something, but you really had to go search for it,” Prosser said.

He could make wine as if nothing had happened and then, according to Prosser, “fret if the bottles were going to show smoke in two years.” Or he could follow the lead of other wineries in the valley and either not make wine or tweak his winemaking process to create something new and quaffable.

“I decided not to cash my reputation on a ‘campfire cuvée.’ I did not want to play fast and loose with my customers that way,” Prosser said. Nor did he wish to leave his vineyard partners high and dry.

Prosser began kicking around ideas with his assistant winemaker, Lucas Ehrhard. Their imaginative response is a clarion call not to write off the 2020 vintage.

They brought into the winery fruit with a fighting chance to taste good, which turned out to about 90% of the crop. Unfortunately, grape skins contain sugars that bind with various compounds in wildfire smoke that can cause wine problems. Those issues can show immediately or wait a few years to bloom in the bottle.

The solution was allowing gravity to work its magic. “Anything beyond free-run juice, anything that went beyond 0.4 bars of pressure in the press, didn’t make the cut. If it showed smoke, we got rid of it,” Prosser said. Free-run juice is the liquid grapes give off under their own pressure as they are stacked on top of one another in a press.

Prosser gently extracted juice without the skins, which gave him an almost clear pinot noir. Instead of leaving it that way, like the famed J.K. Carriere “Glass,” Prosser blended in pinot noir and lees from the 2018 and 2019 vintages to add back color and structure.

The “Clarion” is made with fruit from Prosser’s St. Dolores estate vineyard, along with fruit from the Temperance Hill and Gemini vineyards. In non-wildfire years these grapes are used to make $65 single-vineyard wines. The non-vintage “Clarion” will be released for $26 in April 2021.

The only other J.K. Carriere wines made with pinot noir grapes from the 2020 vintage, the “Glass” and a non-vintage “Provocateur,” will also sell for less than $30.

The “Clarion” isn’t about ageability or terroir. Prosser insists it is an “archetypal wine” that dreams of what a great summertime red wine would be like if all the rules were tossed. “We wanted crazy, light-transmitting color and huge amounts of clean fruit with some structure,” Prosser said.

The “Clarion” pinot noir is in a screwcap-topped clear glass bottle designed to show off its violet red crayon color. I recently had a chance to taste it at a perfect 52 degrees Fahrenheit. Thanks to five days without power, I had little flexibility on the serving temperature.

Blueberries filled the air like Violet Beauregarde’s personal perfume as I poured the wine. When first bottled, Prosser said the “Clarion” smelled of gooseberries and raspberries, which are both related to snozzberries. Then, according to Prosser, the wine’s aromatics evolved to blueberries. Prosser should have known it happens every time. They all become blueberries in Wonka-esque dreams.

The “Clarion” is equally fun to drink, without a trace of anything I would attribute to smoke. Its clean, vibrant mouthfeel is packed with massive amounts of tart raspberries and ripe boysenberries surfing a healthy dose of acididty. The fruit mixes with a flavor similar to toasted oats to give it a touch of a Scottish cranachan dessert. Rest easy, the “Clarion” is bone dry at 13.5% alcohol by volume.

The “Clarion” is indeed a perfect combination of “scrumptious” and “diddly.”

Home Videos The WORLD of WINE – Wine News. Cheap wine, tasting notes and cooking with wine The World of Wine – May 2021 … END_OF_DOCUMENT_TOKEN_TO_BE_REPLACED

How to visit Napa Valley on a Budget. In this video Carson and I explain a few ways to enjoy Napa on the cheap. Tip and advice about how to visit Napa … END_OF_DOCUMENT_TOKEN_TO_BE_REPLACED

Home Videos Get To Know Argentina Wine | Wine Folly If you love Malbec, Argentina is your ultimate wine region. But that’s not … END_OF_DOCUMENT_TOKEN_TO_BE_REPLACED