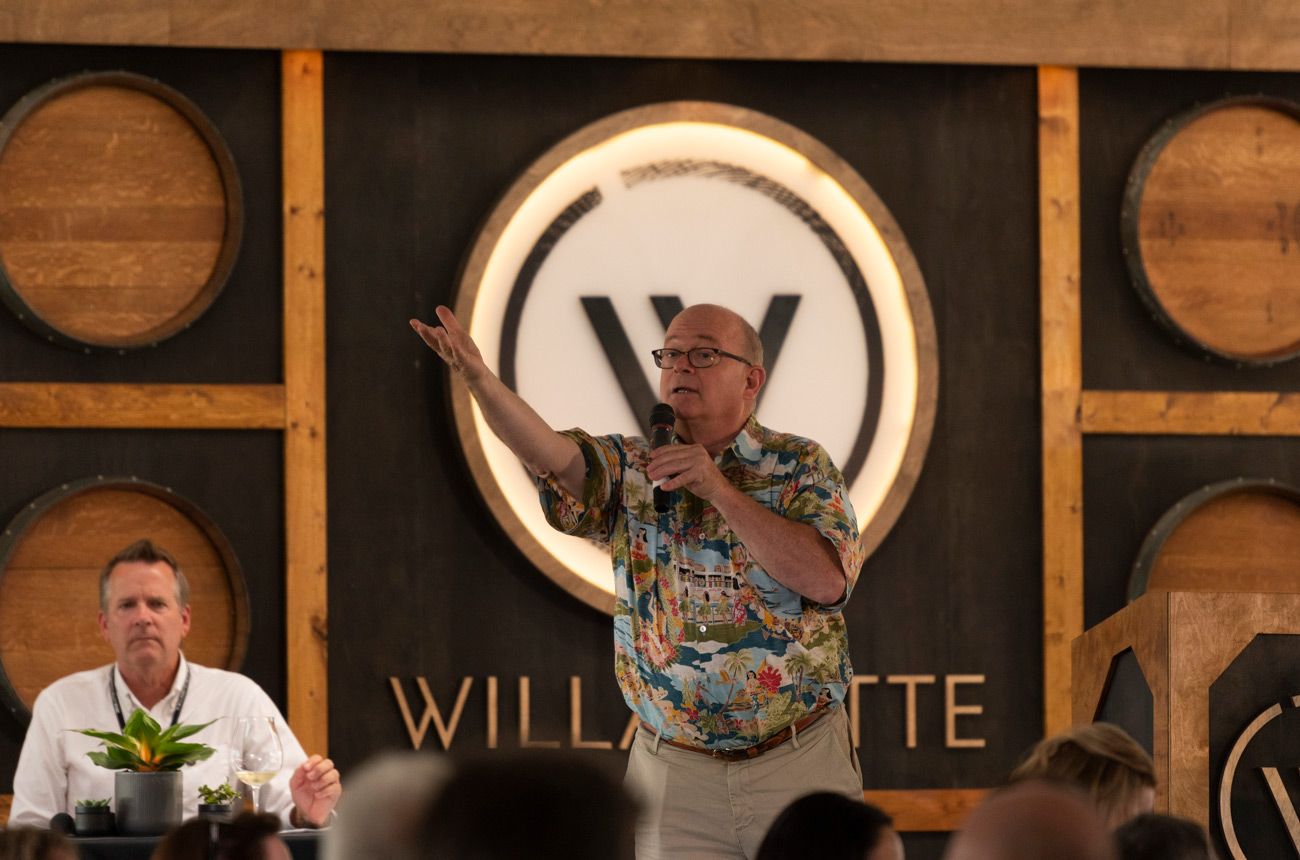 It was the first year with both live (59) and online (38) bidders – during last year’s pandemic, the auction was organised as a purely online sale.

Lots for the Willamette Valley Pinot Noir Auction 2021 each consisted of small-production runs with fanciful names. The auction showcased the wines of the 2019 vintage, which proved to be a return to a classic Oregon style. The top lots by bottle price included five cases each of the following 2019 Pinot Noirs:

The 2019 vintage in Willamette Valley, Oregon

After a late budbreak and flowering, a fairly large crop was set on the vines. Temperatures during the growing season were moderate but nights remained cool, resulting in wines with bright fruit and crisp acidity. Rain began just before harvest, interrupting the harvest several times.

According to Maggie Harrison of Antica Terra, ‘2019 was the hardest vintage I’ve ever had in my entire life.’

Other vintners were more sanguine. ‘This vintage shows why we should grow Pinot Noir in Oregon. It has flavour, intensity and a silky, ethereal quality to it,’ said WillaKenzie Estate winemaker Erik Kramer. He added: ‘Despite the rain, the fruit was clean; canopy management has improved greatly in the past 15 years.’ Most growers agree that, with rigorous sorting, 2019 will produce satisfying results.

The Willamette Valley has endured a string of challenges in the past year. In July 2020, rampaging wildfires during the growing season led to widespread smoke taint in the grapes. At the same time, residents grappled with the crippling effects of Covid-19 as well as civil unrest during the Black Lives Matter protests in nearby Portland.

Meanwhile, the 2021 growing season ushered in record-setting temperatures during the ‘heat dome’ event as the thermometer climbed to near 50°C.

Despite these notable headwinds, the local community rallied to present their 2019 vintage wines for this year’s auction. Proceeds of the auction benefit the Willamette Valley Wineries Association, which counts nearly 250 members. The Association also partnered this year with the Habitat for Humanity charity to fund The Home that Wine Country Built – a project to provide shelter to a local wine country family in need.

The 2021 event was co-chaired by Rob Alstrin of Adelsheim Vineyards and Jessica Endsworth of Northwest Wine Co.

It was announced in the week of this year’s auction that Northwest Wine Co had been purchased from its founders by a group of investors led by local investment firm Casparian Partners. Reputed by the principals to be ‘probably the largest transaction ever done in Oregon wine’, the deal includes more than 283ha of vineyards and more than 300,000 cases annually.

Home Videos The WORLD of WINE – Wine News. Cheap wine, tasting notes and cooking with wine The World of Wine – May 2021 … END_OF_DOCUMENT_TOKEN_TO_BE_REPLACED

How to visit Napa Valley on a Budget. In this video Carson and I explain a few ways to enjoy Napa on the cheap. Tip and advice about how to visit Napa … END_OF_DOCUMENT_TOKEN_TO_BE_REPLACED

Home Videos Get To Know Argentina Wine | Wine Folly If you love Malbec, Argentina is your ultimate wine region. But that’s not … END_OF_DOCUMENT_TOKEN_TO_BE_REPLACED