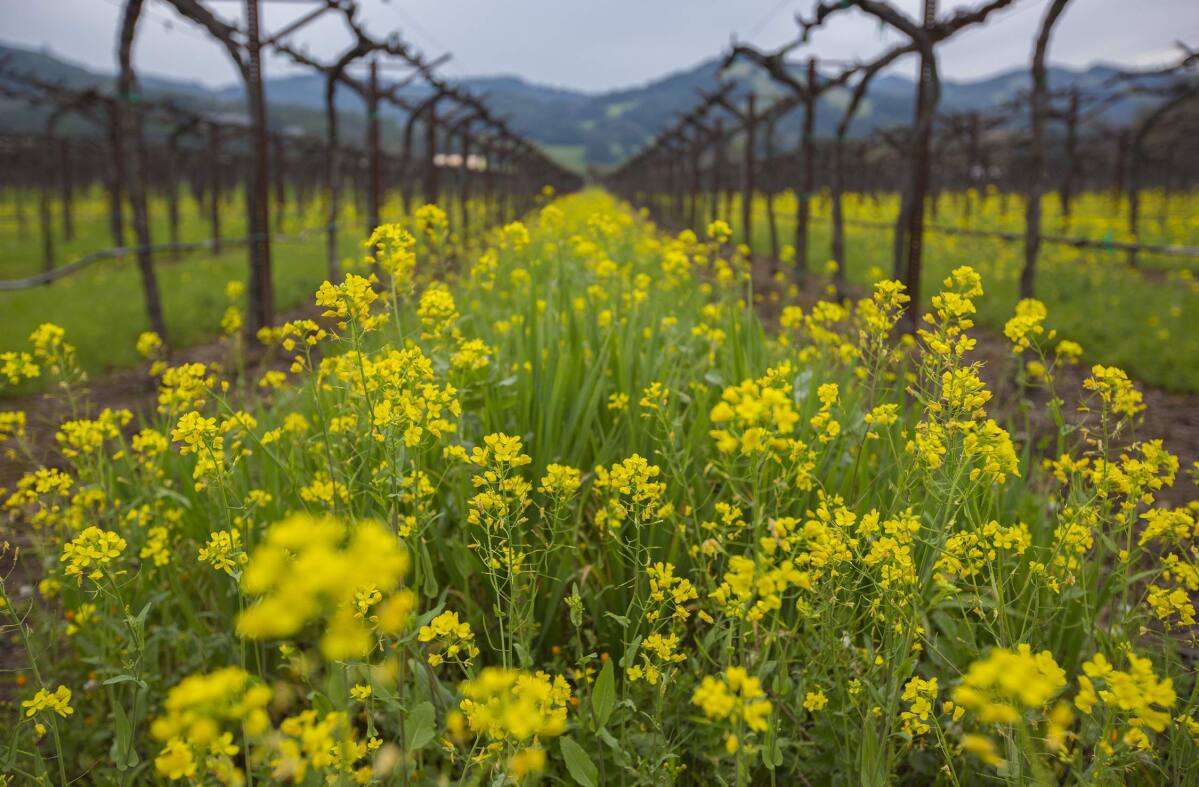 Clocks sprang forward last Sunday, the official start of spring is March 20, but signs of the season have been coloring the landscape for weeks. The sunny yellow found in mustard and daffodils dazzles, but there is so much more to see and understand through the trained eye of a naturalist on an organized hike. Or just pick a trail and set out on a private adventure.

Mustard, the golden-yellow flowers on tall stalks blanketing vineyards this time of year, may be wild or sown by vineyard managers because of the nutrient value the plant provides to grape vines. On any given day one is likely to see people standing in a vineyard full of mustard posing for a selfie – visitors and locals alike. And daffodils splash the landscape, but there are dozens of less showy flowers, some tinier than the head of a pencil eraser.

Sonoma Valley has a number of opportunities for organized hikes or impromptu walks on local trails to find wildflowers and appreciate spring.

“The regional parks in this area are really good for that,” said Ruthie Saia, a board member of the Milo Baker Chapter of California Native Plant Society. Saia leads plant walks, which have been on hiatus since shelter-in-place rules were ordered due to the pandemic, but she hopes to resume the walks soon, she said.

In the meantime, she encourages people to “get out on their own” because there are “trails everywhere.”

Jason Mills, senior ecologist with Sonoma Ecology Center, is smitten by flowers and how they can draw attention to nature and the environment.

“Flowers are there to enrapture us and get us into actively engaging in our landscapes,” he said. “They are ephemeral beauties, so sensitive, they kind of come and go. It’s an amazing thing to get to know them.”

Flowers are plants’ method of sexually reproducing and help plants to “continually evolve,” Mills said. What happens above ground and results in the flower is communicated underground. Flowers help plants learn to adapt to the environment as it changes, due to drought, heat or fire, for example.

“Generally speaking we are seeing incredible biodiversity like never before in post fire areas with intact habitats, while those areas with a history of land use or disturbance are showing a proliferation of weeds making effective land management in this era of higher fire frequency more important than ever,” Mills said.

The early bloomers are often perennial species – wildflowers are a mix of annual and perennial – with bulbs and corms, he said.

This week for example, Large said there is a “wide variety of blooms” to discover such as trillium, a plant with leaves and flowers of three. Another common wildflower is hounds tongue, which has five-lobed petal flowers that range in color from deep blue to pink-purple surrounding a ring of white heart-shaped centers. In the borage family, the flowers sit high on a tall stock reaching up out of a base of leaves, some say they are shaped like a dog’s tongue, which may or may not be how the plant got its name. Look for hounds tongue in woodland, chaparral and shady areas.

Variations in the flowers found will depend on the environment or ecosystem in which the trail is located, Mills said.

“Here in Sonoma we have so many ecological communities the biodiversity is astounding,” he said.

Milkmaids, some consider it to be a sign of spring, have four white petals on a narrow stem. They are part of the mustard family, that seemingly obsequious golden glow in vineyards this time of year, and bloom from January through April. They signal a setting sun by closing up their petals at sundown.

Blue dichs are part of the lily family and form cluster-like flower heads in blue, or with tones of purple and pink. Given the region’s fires these flowers may be more visible because they prefer open areas and soils rich in nutrients. The corms of the plant were part of California Native Americans’ diet.

The California buttercup’s color is equally as cheerful as mustard and daffodils and can range in size from 5 inches to more than 2 feet. It blooms from February through May offering bees and other pollinators a long season of nectar. The Miwok tribe of the Northern California region was known to eat the seeds of the buttercup.

The flowers blooming now will go to seed by May, said Mills, but others are still getting ready and storing energy to bloom later.

“The parade will continue throughout March and April with a new array of wildflowers blooming,” Large said. April tends to be the peak period for blooming.

Native shrubs are also in bloom “that are pretty epic,” Saia said.

Manzanita is one good example, she said. Its smooth, dark red-brown trunk and branches provide a contrast for tiny, white urn-shaped flowers, similar to lily of the valley. The flowers turn into little “apples,” which is where it gets its name, Mills said.

The Spanish word for apple is “manzana” making manzanita the word for “little apple.” The berries, or apples, were used by Native Americans to make a cider, and the leaves of the shrub were used for treating sores or indigestion.

“The fruit form is incredible diverse,” Mills said. However, “nowadays we need to be careful about harvesting resources from the wild as many of them are actively in decline due to displacement through direct development, or through the sprawl of invasive species.”

Manzanita, buttercups and the others are among the plants that can be seen on upcoming hikes, such as one on March 20 led by volunteers, local wildflower enthusiast Phil Weil and naturalist John Lynch at Jack London.

Home Videos The WORLD of WINE – Wine News. Cheap wine, tasting notes and cooking with wine The World of Wine – May 2021 … END_OF_DOCUMENT_TOKEN_TO_BE_REPLACED

How to visit Napa Valley on a Budget. In this video Carson and I explain a few ways to enjoy Napa on the cheap. Tip and advice about how to visit Napa … END_OF_DOCUMENT_TOKEN_TO_BE_REPLACED

Home Videos Get To Know Argentina Wine | Wine Folly If you love Malbec, Argentina is your ultimate wine region. But that’s not … END_OF_DOCUMENT_TOKEN_TO_BE_REPLACED