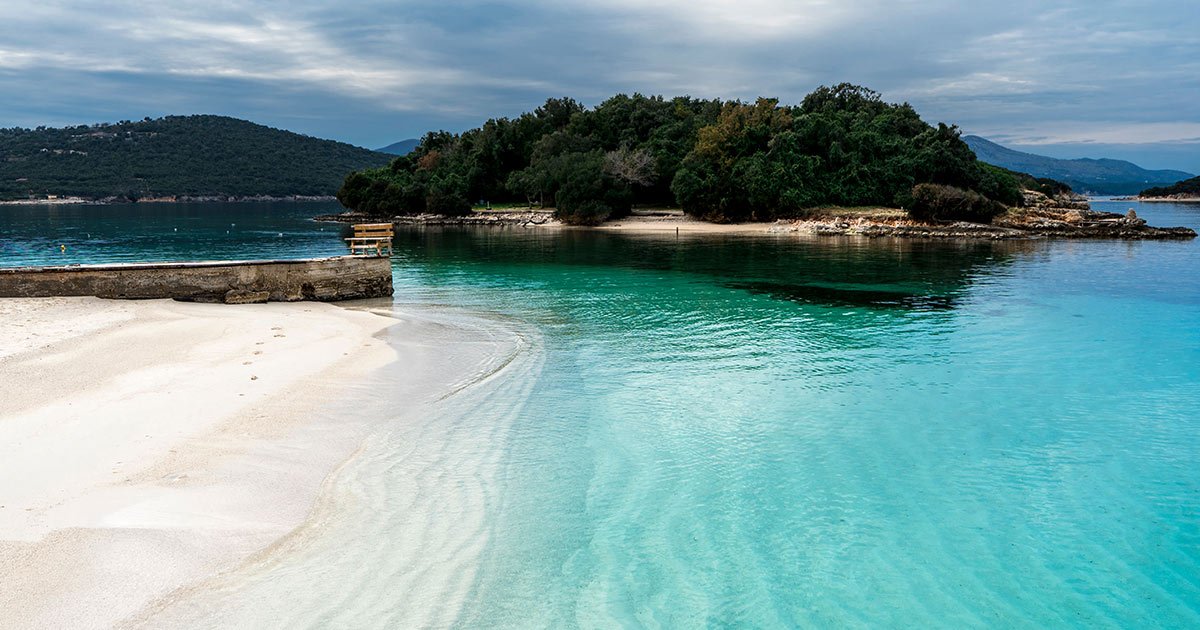 Unbelievable natural phenomena, grapevines as far as the eye can see, and some of the craziest Guinness World Records — this is the Balkans

Much of what most people know about the geographical region of the Balkans doesn’t really extend beyond Croatia. Why is that? Unobstructed nature, almost deserted beaches, low prices, and nice and welcoming people are just a few of the reasons why Southeastern Europe should be flooded with tourists.

Altogether twelve countries belong to the Balkans. In this article, we’ll take a closer look at the often forgotten ones and tell you why these hidden gems belong at the top of your bucket list.

Montenegro’s topography has something for everyone Despite its compact size, the topography of Montenegro is impressively diverse. From miles of coastline with turquoise-blue water to mountains that only seasoned hikers climb, and powerful waterfalls, there is everything within a reasonable distance.

An hour’s walk from the modern city of Bar is the millennial Byzantine city of Stari Bar. Since the earthquake in 1979, most of the city hasn’t been rebuilt. Many buildings are missing roofs, the large Ottoman bathhouses are abandoned, and the city walls are in ruins, offering a fascinating snapshot of the past. On one of the highest peaks of the Lovćen National Park and a little off the tourist trail are the remains of the famous Montenegrin poet, philosopher, and literary symbol Petar II. Petrović-Njegoš, which are kept in a stone mausoleum.

From Lovcén on the way to Kotor, you not only drive through countless serpentines but also wonderful viewpoints that reveal a breathtaking view of the coast of Kotor. Half a day should be spent exploring the UNESCO-protected old town. The best time is after 4 pm when all the cruise ship tourists have already disappeared, Kotor is almost empty, and the evening sun stretches over it. The atmosphere is somewhat mystical. If those old town walls could talk, I bet the stories they’d tell would be fascinating.

In the footsteps of Pippi Longstocking Mostly known as the “Montenegrin Miami” because of its lively bars and beach clubs, the town of Budva actually served as the film location for “Pippi Longstocking” and “The Outsiders of Uskoken Castle”.

But impressive coastlines are not all there is in Montenegro. Head to the country’s less-traveled eastern interior for mountain ranges, freshwater lakes, and dense forests. The lake of Skadar, which borders Albania, is a sight for sore eyes. Nestled between sandy shores, wildlife, and a few historic villages, it is known for its unspoiled beauty. Mostly known for wacky Vampire attractions, Romania is much more than Transylvania and Dracula myths. The amount of history and World Heritage sites will make every seasoned traveler’s head spin.

Nicknamed “Paris of the East”, Romania’s capital truly lives up to its name. Bucharest’s architectural landscape and Haussmann-inspired buildings exude a French flair. The Romanian Parliament, for example, is as imposing as any Parisian building, to say the least. As the second-largest administrative building in the world, just after the Pentagon, it’s a whopping 240 meters long and 86 meters high. It’s also the heaviest building in the world according to Guinness World Records. It holds 3,500 tons of crystal, 480 chandeliers, 1,409 ceiling lights, and 700,000 tons of steel and bronze for the doors alone.

Cărturești Carusel, Bucharest’s loveliest bookstore, attracts book lovers and influencers alike. You can either buy over 10,000 books or take wonderfully kitschy Instagram pictures, or both.

Romania also has incredible beach towns. Situated along the shores of the Black Sea, Constanța is a popular vacation destination for both locals and tourists from surrounding countries.

Right by the sea are an old abandoned casino and an abandoned synagogue. While the outside structure is somewhat still standing, the inside is in ruins with weeds and plants sprouting through the bricks. It’s an impressive sight that you shouldn’t miss.

Albania is the Caribbean of Europe The beautiful islets of Ksamil in the Butrint National Park, Albania — Shutterstock

Admittedly, Albania is not a classic vacation destination. In recent years, however, popularity for this small country north of Greece has increased. And rightly so. The Albanian Riviera can easily keep up with more prominent European destinations such as the South of France or Italy.

The Ionian Sea, an elongated bay of the Mediterranean, extends from Greece to Albania and reminds many travelers of the Caribbean. Turquoise-clear water and white sand strips are everywhere. And the best part? You’ll have them almost entirely to yourself.

Part of the Butrint National Park, the four rocky islets of Ksamil in the far south of the country, are a must-visit for every beach lover. Even during the high season June to August, the beach is fairly empty. Half an hour’s drive from Ksamil is a natural phenomenon you shouldn’t miss out on. The Blue Eye is a water spring in a more than 50-meter-deep pool. You will be able to see straight to the bottom. It’s mesmerizing.

Also known as the city of a thousand windows because of its backdrop of white Ottoman-era houses and big windows, Berat is a hilltop town located on the Osum river. The city center includes Byzantine churches, the Red Mosque, and the castle district which is now inhabited by townspeople.

Visiting Albania and bypassing the capital Tirana is impossible. Tirana may not necessarily convince at first glance, but it has an old charm to it and many cultural highlights. At Skanderbeg Square, for example, is the famous Et’hem Bey Mosque with the Tirana clock tower.

Bulgaria’s historic Roman towns will transport you back in time Bulgaria is one of those countries that gets easily overlooked as a worthwhile travel destination. The natural landscape alone will keep adventurers happy and busy for a while and the capital Sofia is ideal for a weekend getaway.

The best way to get to know Sofia is by walking. The city’s free walking tour is in fact free of charge and will take you across the city center with more than 20 important sights. Including the Vitosha Boulevard, the imposing Alexander Nevsky Cathedral, and the University of Sofia, where the Cyrillic alphabet was invented.

Plovdiv, Bulgaria’s second-largest city, is only two hours away from Sofia. Named European Capital of Culture 2019, Plovdiv is the oldest continuously inhabited city in Europe and one of the oldest in the world. It is known for its historical center with cobbled streets and impressive old merchant’s houses as well as the Roman amphitheater.

Another historical town is the lesser-known Veliko Tarnovo. It was the country’s temporary capital after it was liberated from Ottoman rule in 1878. Besides the historical old town, the most important monument is the medieval Tsarevets Castle.

Climbers and hikers will get a kick out of Bulgaria’s countryside. The Seven Rila Lakes in the Rila National Park are one of the most beautiful and unspoiled destinations in Bulgaria. Situated 2,500 meters above sea level and stacked above one another, the lakes are connected by small streams that create tiny cascades and waterfalls between them. Each lake has its own name depending on its characteristics.

The small town of Belogradtschik, which is located in northwestern Bulgaria, has an impressive natural landscape. Still unknown to tourists is the Belogradtschik fortress which can be traced back to the 1st century and the time of the Romans.

If you are not afraid of bats, you should explore the Devetashka Cave. Apparently, the cave was inhabited by people over 70,000 years ago. Today it’s home to over 30,000 bats. The sheer dimensions of the cave only become apparent the deeper you get into it.

Moldova is one of Europe’s leading wine nations Having only received around 160,000 visitors in 2018, Moldova is the least visited nation in Europe. There are several reasons why this small country isn’t hit by tourists. Landlocked between Romania and Ukraine, Moldova is often overlooked or simply forgotten. The collapse of the Soviet Union hit the country very hard. The economy stagnated and tourism never really took off.

Moldova might not be an industrial hub, but it is sure is one for wine. The country’s main GDP is agriculture, more accurately viticulture. There are 127 wineries across the country and Moldova’s vineyards account for more than two percent of the world’s vineyards. No wonder, the country’s biggest tourist attraction is a wine cellar.

Milestii Mici has the largest wine collection in the world. So large in fact, that it made it into the Guinness World Records. Almost two million bottles of wine are stored in 200 kilometers long underground tunnel. Surprisingly, there are no national parks in Moldova, because they aren’t necessary. Since the country is far from being an industrial nation, the incredible natural landscape remains mostly unspoiled. This is also reflected in the excellent air quality. According to a 2018 study by the University of Leeds, Moldova is the only country in Europe whose development is taking place within the ecological limits.

Most of these countries are within a few hour’s reach for most Europeans and yet they remain off the beaten path.

Home Videos The WORLD of WINE – Wine News. Cheap wine, tasting notes and cooking with wine The World of Wine – May 2021 … END_OF_DOCUMENT_TOKEN_TO_BE_REPLACED

How to visit Napa Valley on a Budget. In this video Carson and I explain a few ways to enjoy Napa on the cheap. Tip and advice about how to visit Napa … END_OF_DOCUMENT_TOKEN_TO_BE_REPLACED

Home Videos Get To Know Argentina Wine | Wine Folly If you love Malbec, Argentina is your ultimate wine region. But that’s not … END_OF_DOCUMENT_TOKEN_TO_BE_REPLACED