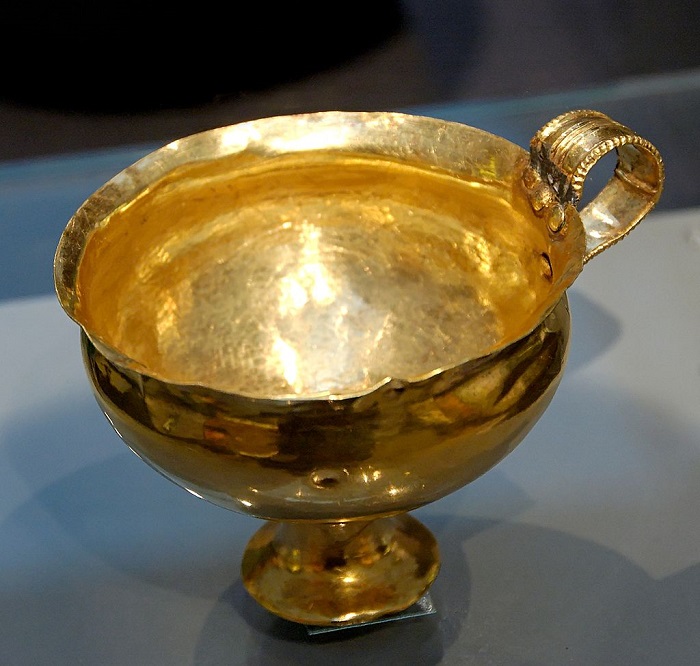 Mixing Greek wine and seawater may sound unappealing today, but it is a winemaking practice that goes back to Ancient Greece, later to be copied by the Romans.

Seawater gives the wine a curious salinity which mixes with the sweetness of the grape and produces a delicate taste, while at the same time preserving the wine longer.

Also, one could say that as a pinch of salt enhances the taste of nearly all foods, it does the same for a glass of wine as well.

The particular practice has been followed through the ages, although there are only a few winemakers who follow it today.

Wine and seawater mix in Greece

Ancient Greece had a long tradition of wine making, wine drinking and wine selling, thanks to its ideal sunny climate, the rocky terrain and its history of maritime trade.

Ancient Greeks drank wine by mixing it with water, usually in a ratio of 1:3 (one part wine to three parts water). They had special containers for mixing and for cooling the libation.

Drinking wine that was not mixed with water (άκρατος οίνος) was considered barbaric. Such wine without water was used only as medicine for the sick or during travel, as a tonic.

According to writings found, ancient Greeks made wine by mixing 50 parts of must with one part of seawater.

Many believed that this way of winemaking had been taught by Dionysus, the god of wine, as evidenced by the myth that when he was threatened by the mythical king of Thrace Lycurgus, he found refuge at sea.

The wine, which was made by mixing the must with seawater, was called ανθόσμιος οίνος (wine that smells like flowers). Fanias Eresios says about the preparation process that “a part of seawater is poured into fifty parts of must and it smells flower-like.” 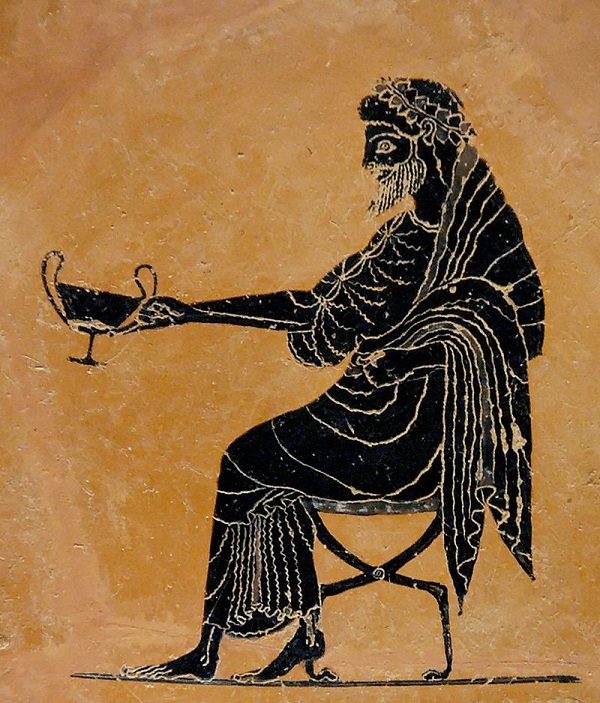 The first historical reference of ancient Greek winemakers pouring seawater into wine appears in the writings of the Roman historian Cato the Elder (234–149 BC).

Winemakers of Kos island in the Aegean were known to have added seawater to their wines in order to preserve them.

Cato the Elder gives details of the practice, including the collection of seawater far from the shore, when the sea is calm, so that the water has optimal salt content.

In his book De Agri Cultura (“On Agriculture,” c. 160 BC), the Roman historian ranks the  vineyard as the most important aspect when judging any farm.

Thalassitis wine, meaning “wine of the sea” in Greek, is a specific variety of white wine made from the assyrtiko grape, produced only on Santorini.

Thalassitis is produced from vineyards on rocky slopes and has a very characteristic taste where citrus fruits mix with a subtle taste of minerals.

Then there is the little-known – but famous in wine connoisseur circles – Thalassitis Submerged: The special Santorini wine that is aged for five years 25 meters deep in the open sea.

This exquisite wine has a smoky, aromatic dimension with a hint of hydrocarbons. Its taste has softened with absolutely no sign of oxidation.

Home Videos The WORLD of WINE – Wine News. Cheap wine, tasting notes and cooking with wine The World of Wine – May 2021 … END_OF_DOCUMENT_TOKEN_TO_BE_REPLACED

How to visit Napa Valley on a Budget. In this video Carson and I explain a few ways to enjoy Napa on the cheap. Tip and advice about how to visit Napa … END_OF_DOCUMENT_TOKEN_TO_BE_REPLACED

Home Videos Get To Know Argentina Wine | Wine Folly If you love Malbec, Argentina is your ultimate wine region. But that’s not … END_OF_DOCUMENT_TOKEN_TO_BE_REPLACED