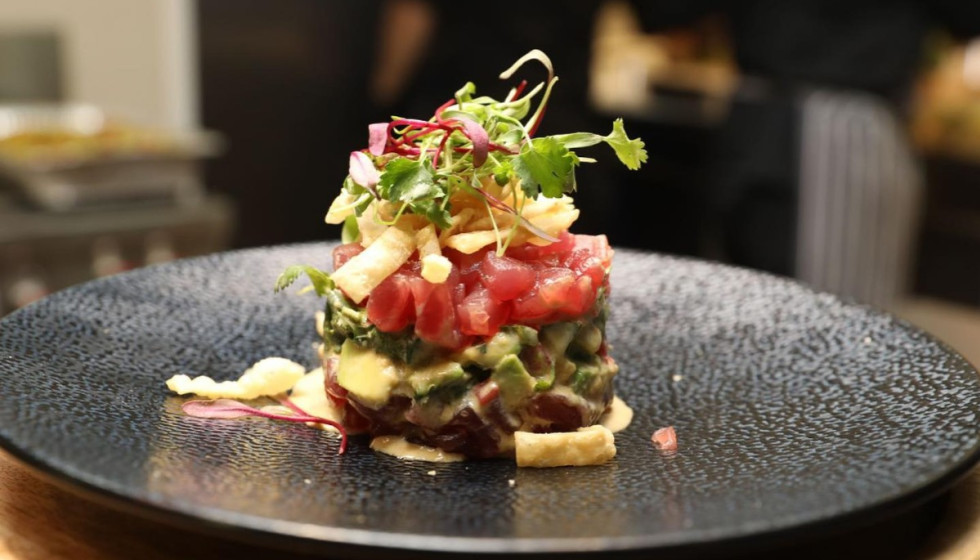 The restaurant is located at 8103 Rasor Blvd. #110, in the former Dough Society pizzeria space, and will open in the fall.

Rogers has a long list of accomplishments including winning the 2020 Iron Fork Chef Competition, presented by US Foods and the World Food Championships, as well as appearances on Food Network and recurring appearances on Mid-Day ABC with WFAA anchor Cleo Greene.

He just returned from a stint as a celebrity chef at the 2021 147th Kentucky Derby at Churchill Downs.

He’s worked in a variety of settings from Michelin-starred restaurants Ristorante Vespasia in Italy, and Minibar by Jose Andres in Washington DC, to hotels such as the Sofitel Luxury Hotel in Philadelphia, where he cultivated a rooftop garden with beehives, and operated two farm-to-table restaurants.

He came to Texas to help open and run restaurants for the Doc B’s Fresh Kitchen chain before joining Savor in Klyde Warren Park, where he was executive chef. (Savor closed in August 2020 due to the pandemic, and will be replaced by a location of Mi Cocina.)

Beyond his culinary prowess, Rogers has an unflaggingly upbeat personality, and speaks enthusiastically about his newest venture, one that combines elements of a European-style Italian restaurant with a modern American steakhouse.

“This has been an exciting opportunity to develop something from the ground up, from the menu to the design of the space,” he says. “The goal is transport you as soon as you walk in the door. It’s intimate, with about 70 seats, with Italian countryside images helping to establish an Old World-style but in a dark, elegant steakhouse space.”

They’re still working on the menu, but some things they’ve already resolved, including a careful approach to sourcing.

“We’ll be making pastas in-house with artisan flours,” Rogers says. “We’re working with Hayden Flour Mills in Arizona, and consulting with Kelly Whitaker from the Noble Grain Alliance, the Colorado nonprofit that’s bringing heritage grains back to farms and restaurants. With these heritage flours, the grain is alive, it’s a living thing, and that contributes something to the experience.”

Steaks will come from local suppliers like Rosewood, Halpern in Arlington, and A Bar Ranch in Celina, as well as Allen Bros., the Chicago-based steak heavyweight — but with a goal of keeping things affordable.

“We want to make this approachable for everybody, and feel like that will set us apart,” Rogers says. “We want to make sure everybody feels welcome and is greeted with enthusiasm. We want to have the best steaks, the best pasta, and the best wines, but also not try to gouge on the price. There’ll still be some steaks that are $50 or $70, but still affordable for what we’re serving and the amount of care it receives. We’re here to create an experience.”

If you can’t wait until mid-summer, you can catch Rogers in action at Vino at The Vin, a three-day wine-tasting weekend event at the newly opened boutique Hotel Vin in Grapvine. Rogers presents a four-course wine dinner with pairings from Rombauer Vineyards in the Bordeaux Ballroom on Thursday May 20.

The dinner runs from 7-10 pm, and is $165 including gratuity. It’s preceded by a VIP pre-reception at 6 pm with passed wine and hors d’oeuvre son Rioja Terrace for an additional $25. Get tickets here.

Home Videos The WORLD of WINE – Wine News. Cheap wine, tasting notes and cooking with wine The World of Wine – May 2021 … END_OF_DOCUMENT_TOKEN_TO_BE_REPLACED

How to visit Napa Valley on a Budget. In this video Carson and I explain a few ways to enjoy Napa on the cheap. Tip and advice about how to visit Napa … END_OF_DOCUMENT_TOKEN_TO_BE_REPLACED

Home Videos Get To Know Argentina Wine | Wine Folly If you love Malbec, Argentina is your ultimate wine region. But that’s not … END_OF_DOCUMENT_TOKEN_TO_BE_REPLACED