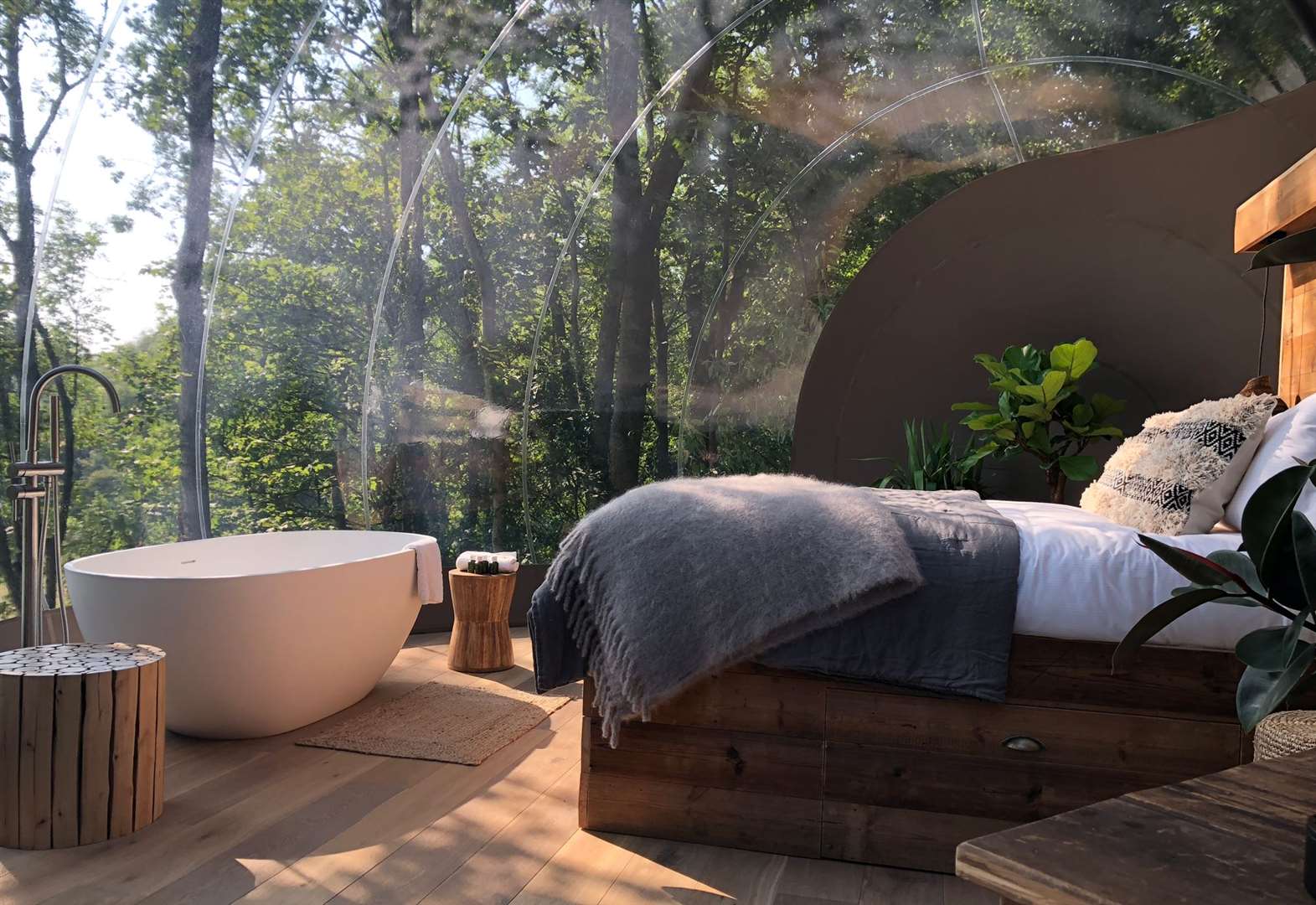 Is the somewhat paltry number of green list countries giving you the blues? Has a year of WFH, home-schooling and lockdown left you yearning for a night or two spent somewhere that isn’t inside your own four walls?

With hotels given the go-ahead to reopen from Monday, now’s the time to treat yourself to a few nights of rest and relaxation at one of Kent’s most luxurious destinations…

Dreams of going on safari feeling even further away thanks to the ongoing travel restrictions? Well, we may have the next best thing right here in the Kent countryside just outside Hythe.

Port Lympne Reserve is one of two wildlife centres run by the Aspinall Foundation, a charity which works towards the protection of endangered species. Not only can visitors come and see some of the magnificent wildlife at the reserve outside Hythe, they can also stay in a range of truly luxurious accommodation.

Short breaks on offer range from rooms in their boutique hotel to romantic nights under the stars in a 180 degree, panoramic bubble pod. And in a number of the lodges you can even wake up to the sight of animals right outside your window, before taking to your own personal buggy to explore the 600-acre reserve.

Sprawling away from the reserve and out towards the sea is the flat expanse of Romney Marsh, which is traversed by one of the smallest public railways in the world.

Opened in 1927, the Romney, Hythe and Dymchurch railway operates a fleet of one-third size steam and diesel locomotives along little more than 13 miles of track from the Cinque Port town of Hythe all the way to Dungeness, the vast shingle ‘desert’ which is home to Derek Jarman’s famous Prospect Cottage.

For those coming by car, the reserve is situated just a short drive from J11 of the M20 between Ashford and Folkestone.

Its nearest railway station is Westenhanger, which is around 90 minutes from London Charing Cross, or take the high-speed train from London St Pancras International and change at Ashford International. All services are operated by Southeastern.

The Pig at Bridge Place

Opened in April 2019, The Pig occupies the former home of the Bridge Place Country Club, a 17th century manor house that hosted renowned parties and gigs by bands including Led Zeppelin and The Kinks.

The building contains a wealth of period features, including large fireplaces, secret stairways, panelled rooms and endless nooks and crannies.

A kitchen garden and restaurant sit at the beating heart of the property, anything that cannot be supplied by the gardens is sourced from Kent’s best producers within a 25-mile radius of Bridge.

With far reaching views out across the Kentish countryside, all bedrooms are finished to a high standard. And elsewhere in the grounds there are Kentish hop pickers’ huts on stilts sit alongside the river in the grounds, each made from reclaimed materials, with a double-bedroom, fitted bathroom and wood burning stove.

You’re staying in the heart of the Wine Garden of England, so a visit to Simpsons Wine Estate in nearby Barham is a must if you want to find out why wine made in Kent is making waves around the world.

The winery was established by Charles and Ruth Simpson in 2014, and they have now planted around 30 hectares of vineyards in the rolling countryside of the Elham Valley outside Canterbury.

Their three planted vineyards – made up of Chardonnay, Pinot Meunier and Pinot Noir grapes – have the potential to produce upwards of 250,000 bottles of English still and sparkling wine per year.

Visitors can explore the winery and sample its produce by joining a wine tasting and tour of the estate.

The Pig is about 15 minutes from Canterbury by car and there is free parking at the hotel.

Bekesbourne is the nearest railway station, about two miles away, and can be reached by Southeastern trains from London Victoria via Canterbury in around 90 minutes.

Describing itself as “not an ordinary bed and breakfast”, the House of Agnes is ideally located for a break exploring the historic city of Canterbury.

Featured on Channel 4’s Four in a Bed, this 17-room B&B is made up of nine themed rooms in the main house and eight more modern ‘stable’ rooms facing onto the garden.

It reopens on May 17 and anyone who stays for more than two nights will receive a discount on standard room rates.

There is a large garden with deckchairs for relaxing, free on-site parking, a cosy bar and comfy lounges, while breakfast can be enjoyed in its wood-panelled breakfast room or on the terrace in good weather.

Of course many first-time visitors will beat a path to the famous cathedral, seat of the Archbishop of Canterbury and famously the site of the martyrdom of Thomas Becket.

But that might be a somewhat obvious suggestion. So why not learn about the city before the coming of Christianity on a visit to the Canterbury Roman Museum.

The story begins in in 1868 when workmen digging trenches for a new drainage system unwittingly unearthed a beautifully preserved Roman floor mosaic.

After the Second World War – during which the city was targeted by the so-called Baedeker Blitz – more Roman remains where uncovered amid the bomb damage, and in time a museum grew around what is now known to be one of the UK’s only remaining in situ Roman pavement mosaics.

Canterbury can be reached by car via the M2/A2 from London but, although the House of Agnes does have parking, the city is easily explored on foot – or perhaps by e-scooter.

Set in elegant Georgian house Macknade Manor in Faversham, Read’s has long cultivated a reputation for fine food, with the chef David Pitchford earning the restaurant a Michelin star for two decades.

The house, which is surrounded by tranquil grounds with lawns shaded by lofty cedar, weeping willow and horse chestnut trees, also offers six traditional-style bedrooms for those who’d like to turn a meal into a longer stay.

Read’s describes its menu as showcasing seasonal dishes which “blend herbs and vegetables from the manor’s own walled kitchen garden with local game and fish fresh from the quayside at nearby Whitstable and Hythe” and the wine list “balances the European classics with a carefully chosen and imaginative selection from the Americas and the New World”.

Rates for a double room, dinner and breakfast start at £160 per person midweek, rising slightly at the weekend.

If you are visiting from July onwards, and great local produce is on your wishlist, then why not take a tour of Britain’s oldest brewery?

Shepherd Neame has been crafting the finest Kentish ales in the medieval market town of Faversham for centuries, and from July 1 beer lovers will once again be able to explore the brewery, discover more about its history and take part in a tutored tasting of the ales which have made the Sheps name famous in Kent and beyond.

Read’s is situated on the A2 Canterbury Road in Faversham, just a short distance from J7 of the M2 at Brenley Corner.

Situated just a stone’s throw from chef Mark Sargeant’s harbour-side restaurant Rocksalt, these four boutique bolt holes – two with sea views – are an ideal base from which to explore the transformed Folkestone seafront.

Kitted out with Egyptian cotton bedding, flat-screen TVs and Nespresso machines for the morning caffeine hit, these definitely rank towards the luxury end of the scale.

If you’ve decided to stay here, then there’s every chance you’ll be wanting a table at Rocksalt. The restaurant serves modern British food using ingredients sourced from the sea and countryside around Folkestone, all with sweeping views over the harbour and out into the English Channel.

As spring turns to summer there really is no better time to explore Folkestone’s Creative Quarter, with its quirky mix of independent traders and great places to grab a bite to eat.

The recently renovated Harbour Arm is also home to a host of different street food vendors and enjoys stunning views of the coastline stretching away towards the White Cliffs and Dover.

Art lovers are also in for a treat, as Folkestone is home to a permanent public art exhibition outdoors around the town and harbour, with artworks popping up in both scenic and surprising locations.

The changing exhibition, currently consisting of 84 artworks by 44 artists, is a legacy of the Triennial which is staged in the town this year takes place between July 22 and November 2.

Folkestone can be reached via the M20 from London.

The nearest station is Folkestone Central, which is less than an hour by high-speed train from London St Pancras International or around 90 minutes from London Charing Cross. Both services are operated by Southeastern.

Set in 14 acres of picturesque grounds close to the centre of Tunbridge Wells, the spa town from which the hotel’s name is derived, the Spa Hotel first opened its doors to guests in 1880.

Originally built in 1766 as a country mansion, hotel has a long-established history in the town and is home to 70 rooms, an award-winning restaurant, and – in keeping with the tradition of the town – a spa offering a range of treatments.

Bedgebury National Pinetum is home to the largest pinetum – the name used to describe tree collection that consists mainly of conifers – in the world and is an important place for species conservation, scientific advancement and the understanding of conifers.

Set in 350 acres of rolling Wealden countryside, its mix of conifers and broad-leaved trees is awe-inspiring in its size and grandeur. A series of paths wind through the Dallimore Valley, where you’ll find an impressive stand of giant redwoods.

By car Tunbridge Wells is reached via the A21 from the M25.

Read more: All the latest news from Kent

Home Videos The WORLD of WINE – Wine News. Cheap wine, tasting notes and cooking with wine The World of Wine – May 2021 … END_OF_DOCUMENT_TOKEN_TO_BE_REPLACED

How to visit Napa Valley on a Budget. In this video Carson and I explain a few ways to enjoy Napa on the cheap. Tip and advice about how to visit Napa … END_OF_DOCUMENT_TOKEN_TO_BE_REPLACED

Home Videos Get To Know Argentina Wine | Wine Folly If you love Malbec, Argentina is your ultimate wine region. But that’s not … END_OF_DOCUMENT_TOKEN_TO_BE_REPLACED