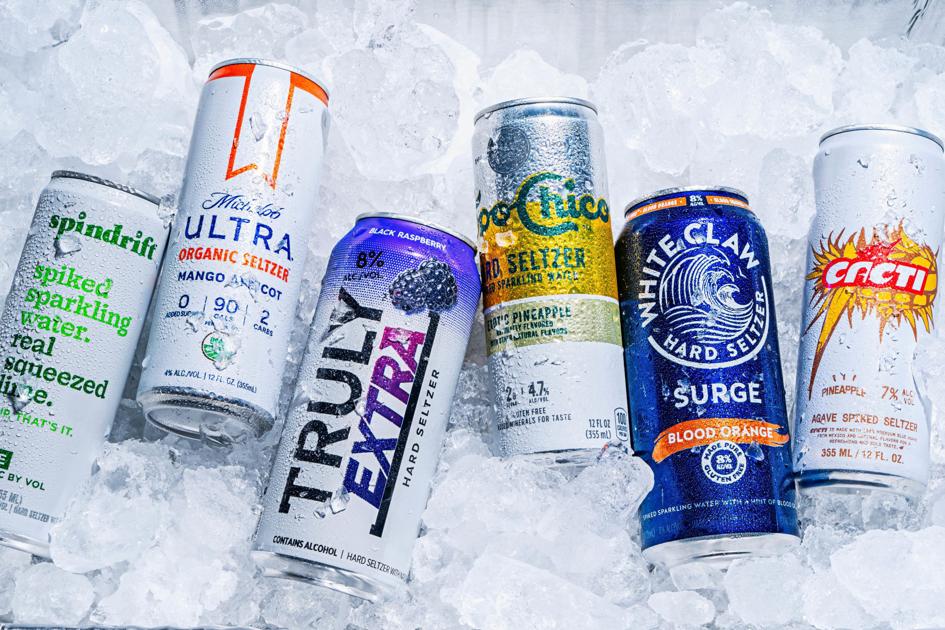 Hard seltzer first stormed the warm-weather drinking scene in 2019 with such ferocity that the season will go down in pop-culture history as the “Summer of White Claw.”

Beverage companies are hoping that this year’s (fully vaxxed, hopefully) party scene will be similarly swimming in the fizzy drink particularly beloved by younger drinkers. Big Beverage has reason to be optimistic: Seltzer sales continued to climb to $4.52 billion in the year ending April 24, a 103% increase over the previous year. And a recent UBS forecast predicts hard seltzer sales will reach a can-dropping $15 billion by 2025.

To meet the seemingly unquenchable demand, some of the most recognizable beverage brands are offering a slew of new offerings just in time for “Shot Girl Summer,” which seems to be the moniker the zeitgeist is favoring for this year’s season of patio and poolside hangs.

Some of these new kids on the seltzer block are far different than their progenitors. Market leaders White Claw and Truly have each debuted a new version of their popular quaffs that at 8% ABV and 220 calories are far boozier and heavier than the light-and-bright drinks they’re known for.

Which seems puzzling, given that hard seltzers’ initial appeal to younger drinkers was its party-all-day alcohol levels and related lower calorie counts. One can only imagine the marketing meeting at which the concept was hatched: “So team, you know the stuff people love about our drinks? What if — stick with me here — we did the opposite?”

As a colleague noted, “it’s like they’re reverse engineering until they get to Four Loco,” name-dropping the beverage whose boozy, in-your-face profile earned it the nickname “blackout in a can” — and ultimately, an FDA ban. (Four Loko, in fact, debuted its own ultra-hard seltzer last year.)

Perhaps the top seltzer brands can contain multitudes? After all, plenty of fast food joints serve salads alongside those triple-stacked burgers with bacon.

We put the boozed-up offerings from White Claw and Truly to the test, along with a few other seltzers that have debuted in time for summer — whatever it is we end up calling it.

Truly’s entry into this subgenre was our panel’s least favorite by about 880 social distancing lengths (that’s a mile in pre-pandemic speak). Syrupy and cloying, it elicited some primal reactions. A sample: “Nooooo!” “Oh, no, no, no.” From another, a scrunched-up face silently communicated the verdict.

Different tasters imagined both flavors as the product of cough syrup mixology: The blackberry was “like if you mixed Dimetapp and Robitussin together,” one suggested, while the peach mango prompted another to imagine a demented bartender “pour[ing] Dimetapp in with the syrup on the bottom of a Dole’s peaches can.” Even the most ardent of seltzer fans among us lamented, “this is the only one I don’t want to take another sip of.”

Our tasters didn’t love this beefed-up version from the reigning champion of the seltzer aisle, but they at least favored it over the Truly Extra. Lighter bodied and easier-drinking, it packed a punch without aiming for a tastebud-assaulting TKO.

Most preferred the blood orange, which had a bit of pleasant citrusy bite, over the cranberry — but even that earned some praise, with one taster pointing out its novelty in the sea of commercial seltzers and another finding it engagingly (and relatively) “subtle.”

We’ve reached the novelty stage of the Seltzer Era, ergo this concoction from beer giant Anheuser-Busch and Travis Scott, the rapper/brand ambassador who has lent his name to everything from Nike shoes to Reese’s Puff cereal.

But celebrity-driven hype only gets you so far, and this collab proved divisive on the merits. Like Willy Wonka at a wine tasting, some detected notes of Jolly Ranchers, Kool Aid and . . . medicine. One bemoaned the subtlety of the lime — “it’s so plain” — while another found the dearth of faux flavor made it the most bearable. Some tasters liked the punchy pineapple, while others found it had a “bitter back end.”

“I feel like that kombucha meme, where I’m not sure how I feel,” said one taster, referring to the viral TikTok of a woman tasting fermented tea for the first time and alternating multiple times between a grimace of distaste and an expression that indicates she might like it after all.

The flavors of this offering from the beer giant scored points, with one likening them to a nostalgic, albeit grownup, “juice box.” (The brew does contain a hint of white grape juice.)

But the textures were a major drag for others: After a few sips, tasters detected the drink left a filmy coating on the roofs of their mouths. And it literally fell flat in one category, with one taster pouring out a sample into a glass and observing that the bubbles dissipated almost instantly.

Speaking of bubbles, this much-awaited entry into the market from the beloved maker of non-boozy fizz, had them to spare. “I love aggressive bubbles,” enthused one taster. “Like, I want to hear them in my ears.” Those pops and a hint of a mineral edge made the drink more refreshing than its brethren, the panel concluded.

While we generally gave the brand high marks, there was one glaring exception — the mango was the breakout loser of the otherwise likable bunch. “I’m struggling,” said one imbiber after only a small sip, and another complained that it was like “drinking perfume.”

The all-around, unanimous crowd favorite won us over with its natural fruit flavors and un-cloying sweetness. Each can contained a relatively high percentage of fruit juice (between 7 and 10%) in place of the more standard formulas that taste like they’ve been goosed in a lab with sugar and flavor extracts — because they probably have.

Like Topo Chico, the boozy Spindrift closely resembles its nonalcoholic precursors, so if you’re already a fan of the brand’s zero-proof cans, they’re worth a try — even if you’re generally skeptical of hard seltzers as a category.

The tea and lemon concoction, in particular, brought to mind a crisp Arnold Palmer. “I would crush quite a few of these,” said one new fan. The Spindrift’s more juice-forward profile reminded some of cocktails and inspired one taster to imagine taking things in an even boozier direction, which also sort of defeats the point of hard seltzer’s easygoing ABVs. “I want to make a gin cocktail with this,” she said.

Home Videos The WORLD of WINE – Wine News. Cheap wine, tasting notes and cooking with wine The World of Wine – May 2021 … END_OF_DOCUMENT_TOKEN_TO_BE_REPLACED

How to visit Napa Valley on a Budget. In this video Carson and I explain a few ways to enjoy Napa on the cheap. Tip and advice about how to visit Napa … END_OF_DOCUMENT_TOKEN_TO_BE_REPLACED

Home Videos Get To Know Argentina Wine | Wine Folly If you love Malbec, Argentina is your ultimate wine region. But that’s not … END_OF_DOCUMENT_TOKEN_TO_BE_REPLACED