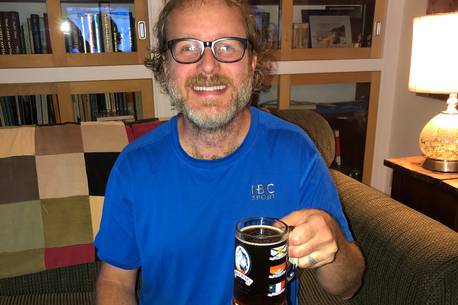 The worst mistake someone can make when making their own homebrew is worrying too much.

For some, homebrewing is a mysterious hobby, but it is really a simple process, explains Chris Jans, senior manager of Noble Grape, a business throughout Nova Scotia dedicated to helping people make great wine and beer.

“Making your own wine and beer is easy, and it is fun. It takes a lot less work than many people think, and in the end, you get to enjoy the results,” he says.

It’s also a point of satisfaction and pride to be able to serve your own wine, beer, or cider, he adds.

Annapolis Valley resident Mindy Vinqvist-Tymchuk began her wine-making experience back in university, when she made what she calls an “undrinkable” wine as part of a microbiology course. Fast forward several years later, to when she met her now-husband. He had bought a wine-making kit and never used it. She decided that as she was an ‘expert’, she’d try her hand at making wine again.

Now, Vinqvist-Tymchuk makes whites, reds, ports, and fruit-infused summer wines. From scratch, she has made purple plum, golden plum, rhubarb, strawberry-rhubarb, and sour cherry, depending on what fruit she has on hand.

For permanent gear, Vinqvist-Tymchuk says you need a 23-litre fermentation bucket, two 23 L carboys, a glass or plastic vessel used in fermenting beverages (you can do it with one, but it’s easier with two), an airlock, hose for siphoning, a wine-making spoon, and a corker.

It is certainly far less expensive to produce your own wine once you have the gear, says Vinqvist-Tymchuk. An inexpensive kit could end up costing about $3 a bottle to make. She recommends buying higher end kits instead, which still end up at $6 to $8 a bottle to make.

“It’s worth it for better wine,” she says.

Instead of buying bottles, she and her husband kid that they hoarded their empty bottles. They were also given empty wine bottles and boiled them to remove the old labels, she says.

Wine making stores like Noble Grape and Wine Kitz have wine recipe books, and ingredients on hand – like acid blends, chitosan/kieselsol, and tannins – if you want to make wine from scratch.

“It may sound like a fair bit to buy, but it pays for itself in no time,” says Vinqvist-Tymchuk.

She says there’s really is no learning curve with the process of making wine, as the kits come with instructions that clearly explain what to do.

“You can simply follow the instructions and be quite happy with your results, and it certainly becomes quite automatic quite quickly,” she says.

It wasn’t until she was comfortable with the process and knew she was making good wines from the kits, however, that she started experimenting with making wine from scratch.

Vinqvist-Tymchuk has learned not to buy cheap kits, and that some wines need more time to grow up than others. Common problems, she says, usually arise because of poor sanitation of equipment or because it’s too cool and the fermentation stalls. If you’re finding that’s a problem, she says, there are heat belts you can buy to put around the primary fermenter.

There are lots of resources online if you have issues, and Jans says Noble Grape has online video tutorials to guide you through the process. Plus, he says, staff are always there to help with advice and tips, and customers can call or email at any time.

Mark Adam, from Gaspereau, N.S. started out making wine years ago but switched to making beer as he says he enjoys the results more.

To homebrew beer, he suggests keeping it simple so not a lot of equipment is needed. Single carboy set-ups that prime and finish the beer in one container in two weeks are available.

Then, brewers must decide if they want a bottling or kegging set-up. Starting with a bottling set-up is very affordable, says Adam, but if you wanted to get a simple keg set-up going, a nice system costs around $300.

“My set-up is very DIY,” says Adam. “It’s a fridge with two kegs in a messy garage with the CO2 container beside it.”

Adam is proud of his end product.

“I think what I make sits far above your mass-produced Canadian beer and competes nicely to my taste buds for mid- to upper-level brown ales and stouts,” he says.

For those interested in learning to make beer at home, he suggests chatting with folks who do it already and see what tips they have, like how to convert an old fridge into a nice beer fridge, where to get second-hand kegs for a good price, which brands of kits are the most reliable and consistent in results, and whether you want to dive into the art of making beer from scratch.

Besides beer, cider and wine production at home, Jans says many brewers are becoming interested in distilling spirits. He cautions, however, that it’s illegal to distill your own spirits in Canada. He says Noble Grape offers supplies that can ferment a high alcohol base which can be flavoured and used as a facsimile, but that is as far as they can go.

To distill spirits, you need a license, and this can be granted through the Nova Scotia Liquor Commission.

Vinqvist-Tymchuk agrees. She encourages people not to be scared to try it and to enjoy yourself.

“Make fun flavours, make pretentious labels for your wine – I do! – and share it with your friends,” she adds.

Home Videos The WORLD of WINE – Wine News. Cheap wine, tasting notes and cooking with wine The World of Wine – May 2021 … END_OF_DOCUMENT_TOKEN_TO_BE_REPLACED

How to visit Napa Valley on a Budget. In this video Carson and I explain a few ways to enjoy Napa on the cheap. Tip and advice about how to visit Napa … END_OF_DOCUMENT_TOKEN_TO_BE_REPLACED

Home Videos Get To Know Argentina Wine | Wine Folly If you love Malbec, Argentina is your ultimate wine region. But that’s not … END_OF_DOCUMENT_TOKEN_TO_BE_REPLACED