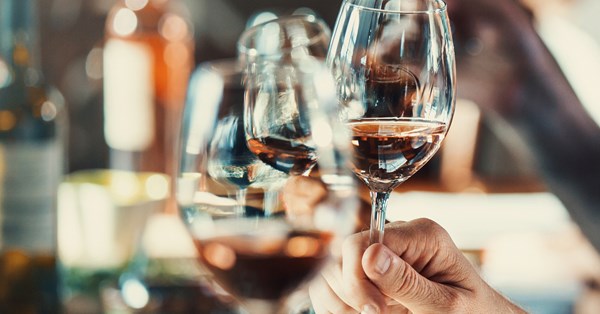 Chris Losh goes to his first event in seven months to find out what a wine tasting – complete with social distancing, masks and hand sanitiser – is actually like…

In 20+ years of writing about booze, I’ve never written an article about a tasting.

Sure there’ve been pieces about wines that I found at them, and people I interviewed or opinions that I formed as a result of attending. But never an article about the actual event itself.

Because this week I attended my first large wine tasting for a very long time, and it felt like a big deal.

Moreover, I clearly wasn’t the only one who felt like that. According to the organisers, every person who came in the door said the same thing: that, if you discount Zoom calls and mini bottles, it was the first tasting they’d actually physically been to for seven months.

This probably explains why in the run-up to the event (over 100 Beaujolais, organised by the generic body, since you ask) the organisers made more of a play about the safety precautions they were putting in place than the wines they were showing. This might have been slightly galling for the producers, but I think the PR company read the mood right. There’s still a lot of nervousness out there for large organised gatherings.

To say the tasting began in an unfamiliar way would be an understatement.

Beforehand, I’d had to book a two-hour slot, to ensure there was no overcrowding. Then, on arrival I was heat-scanned, asked to sign a form that, essentially, said ‘If you die of Covid it’s not our fault’ and given some latex gloves to wear. Once upstairs I was given a glass (yay! Something familiar!) and my own mini-spittoon. It was a deliberately spacious venue, the windows were open, the wines were well spread out and there were no producers behind tables.

And honestly… it was great.

It might have been nice to have had a couple of actual Bojo producers there (quarantine made that impossible) but in terms of tasting, it was fine. There was a masterclass (which I missed), I managed to get through 50-odd wines in my two hours, caught up with a couple of people actually in the flesh and felt in no danger at all.

In fact, with the added space, organised timings and relatively low numbers of attendees, apart from having to empty my own spittoon into a giant vat at the end, it was all rather civilised.

Having to pay for bigger venues to allow for distancing is going to cost companies more, as is the additional Covid-neutering paraphernalia. And of course it’s a lot of extra work, too. Visitor numbers, meanwhile, are sure to be on the low side. I’d guess between 50-100 people turned up for Beaujolais this week, which is not a bad showing all things considered. But I couldn’t help thinking that the cost per attendee must have been pretty high. And of course, it’s a gamble to book venues when the spectre of Lockdown II is lurking.

So, all in all, well done to the Beaujolais team for having the guts to go through with it, and for pulling it off so well. If all tastings were organised like this, I’d be happy to go to them.

The question is: would enough people turn up to make it worthwhile?

Home Videos The WORLD of WINE – Wine News. Cheap wine, tasting notes and cooking with wine The World of Wine – May 2021 … END_OF_DOCUMENT_TOKEN_TO_BE_REPLACED

How to visit Napa Valley on a Budget. In this video Carson and I explain a few ways to enjoy Napa on the cheap. Tip and advice about how to visit Napa … END_OF_DOCUMENT_TOKEN_TO_BE_REPLACED

Home Videos Get To Know Argentina Wine | Wine Folly If you love Malbec, Argentina is your ultimate wine region. But that’s not … END_OF_DOCUMENT_TOKEN_TO_BE_REPLACED