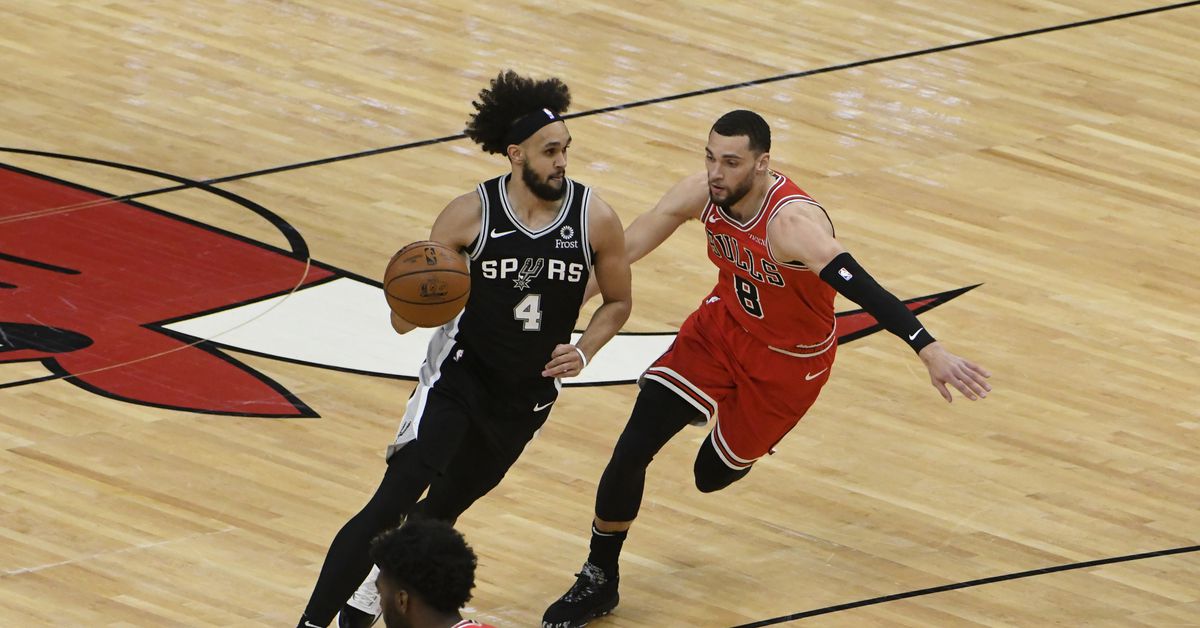 Well, this game in Chicago seems pretty out of hand with San Antonio down more than 20, so I might as well just start writing in the middle of the game and save us all some time. What an abysmal performance from the Spurs. You know, the game against Philly I can understand. It was the first game out of the All-Star break, DeMar was out, and the Sixers are as legit of a title contender as there is. You could practically write that one off before tip. I don’t know what the excuse is here. The Bulls aren’t bad, but they certainly aren’t this good. Maybe this is a crossroads moment for the Spurs? Maybe this is the point where we call this season what it is: a lost cause. Trade the vets. Fuel up the tank. Maybe put Jakob Poeltl in cryo-freeze so he’ll still be fresh when we need him next year because we can go ahead and pull the plug on this endeavor.

Alright so they’re going on a little run here. They look better but, I mean, no. Too little, too late. It’s not like they’ve given any indication that they can keep this up for the rest of the game like they’d need to if they were going to tie this thing before the end of the fourth.

Well if Patty is going to hit shots like that, then maybe…

As I’ve been saying all along, this Spurs team has the heart of a lion. They never give up and you should never count them out. I know I never do! Of course they’re going to have some cold streaks, they’re a squad made up of mostly children! Crucially, that also means they don’t know enough to throw in the towel when they’re down by 23 in the first half. They worked through it and came out the other side. That resiliency, that spark…that’s why this team is so likable. They’re so much fun to watch and they’re just good enough to where you can’t quite convince yourself that the prudent thing to do would be to pack it in and let everyone else duke it out this season. We want to duke it out too! The chance to duke it out is why we’re in this business in the first place! LET THIS TEAM DUKE!

I’m sort of circling around a few different vague and lofty points to make here because the idea of trying to recap whatever happened at the United Center Wednesday night in any type of coherent fashion is beyond my skill level. I watch the games and I tell you what I feel (excuse me, what I…learned). This game left me fully bewildered. It was like a doctor had delivered me a death sentence and then came back in 20 minutes later and told me, “never mind, it’s just gas.” Before anyone had time to process exactly how bad the Spurs were to open the game, Dejounte was hitting a little floater in the lane to take the lead. It’s almost like the first three quarters never happened.

The thing is, they did though. I don’t want to throw cold water on the face of what should be a relatively fun night, but trying to figure out what happened in the beginning feels pretty important moving forward. The comeback was great, but the Bulls have their own youth movement they’re trying to sort out and they were also playing a back to back, so it’s probably best that we not act like running down a car that was fully out of gas was some kind of valiant feat of strength.

We’re now going on the third straight season of the Spurs having this nasty habit of tripping over their feet out of the gate and putting themselves in a hole. It’s not usually this big a hole, but its not like spotting the other team 10 points every time is some cool loophole we use to rope-a-dope our opponents into a false sense of security. I don’t know if the starters are the problem or the coaches are the problem or the pregame meals are the problem or…look, I don’t know what the problem is. If I knew, I would be outside of the Spurs practice facility holding up signs with the answers. I would be calling in every favor I could to get an invite to one of Pop’s après-dîner/wine tasting/heart-to-heart conversations. I’d be wrestling alligators or skywriting messages over his home or running for office on the off chance he’d finally notice me. All I know is that it’s bad and it’s got to stop if they ever want to actually get serious about being a good team instead of just a promising one.

The skill is there. No one can deny that. This is a talented group with all the tools you need to win games. We saw it happen in Chicago when they locked in and just went to work down the stretch. They’re athletic and tough. They can shoot the lights out. They have have an unbelievable amount of chemistry that makes whatever combination of players on the court seem like a perfect coherent mix of dudes specifically designed to destroy the opposition. When this Spurs team is on, man, it’s really on.

They just don’t know how to be on for a full 48 yet. They can seem listless out there at times. Almost like they’re waiting for something to inspire them or slap them awake or make them angry. If you didn’t know any better, you’d think they were waiting for the game to start. It’s weird and it just doesn’t square with what I think I know about them. By all accounts these are high character guys who work their butts off and care deeply about winning. Are they scared? Are they nervous? Are they just not ready?

I’m not trying to call the character of this team into question. Far from it. I know they have have character. It’s impossible to pull off massive comebacks like this without it. All I’m asking is for the guys on this team to believe in themselves as much as we do. They’re good. They’re potentially really good. Sometimes, it feels like the only thing left for them to do is realize it.

– Did you actually start writing this post during the game or was that part up at the beginning just a bit?

– A magician never reveals his secrets

– Ok. It’s just that it was sort of corny to do the whole “Oh, I’m writing this in real time and I thought one thing was going to happen but then it didn’t” thing. It’s played out.

Home Videos The WORLD of WINE – Wine News. Cheap wine, tasting notes and cooking with wine The World of Wine – May 2021 … END_OF_DOCUMENT_TOKEN_TO_BE_REPLACED

How to visit Napa Valley on a Budget. In this video Carson and I explain a few ways to enjoy Napa on the cheap. Tip and advice about how to visit Napa … END_OF_DOCUMENT_TOKEN_TO_BE_REPLACED

Home Videos Get To Know Argentina Wine | Wine Folly If you love Malbec, Argentina is your ultimate wine region. But that’s not … END_OF_DOCUMENT_TOKEN_TO_BE_REPLACED