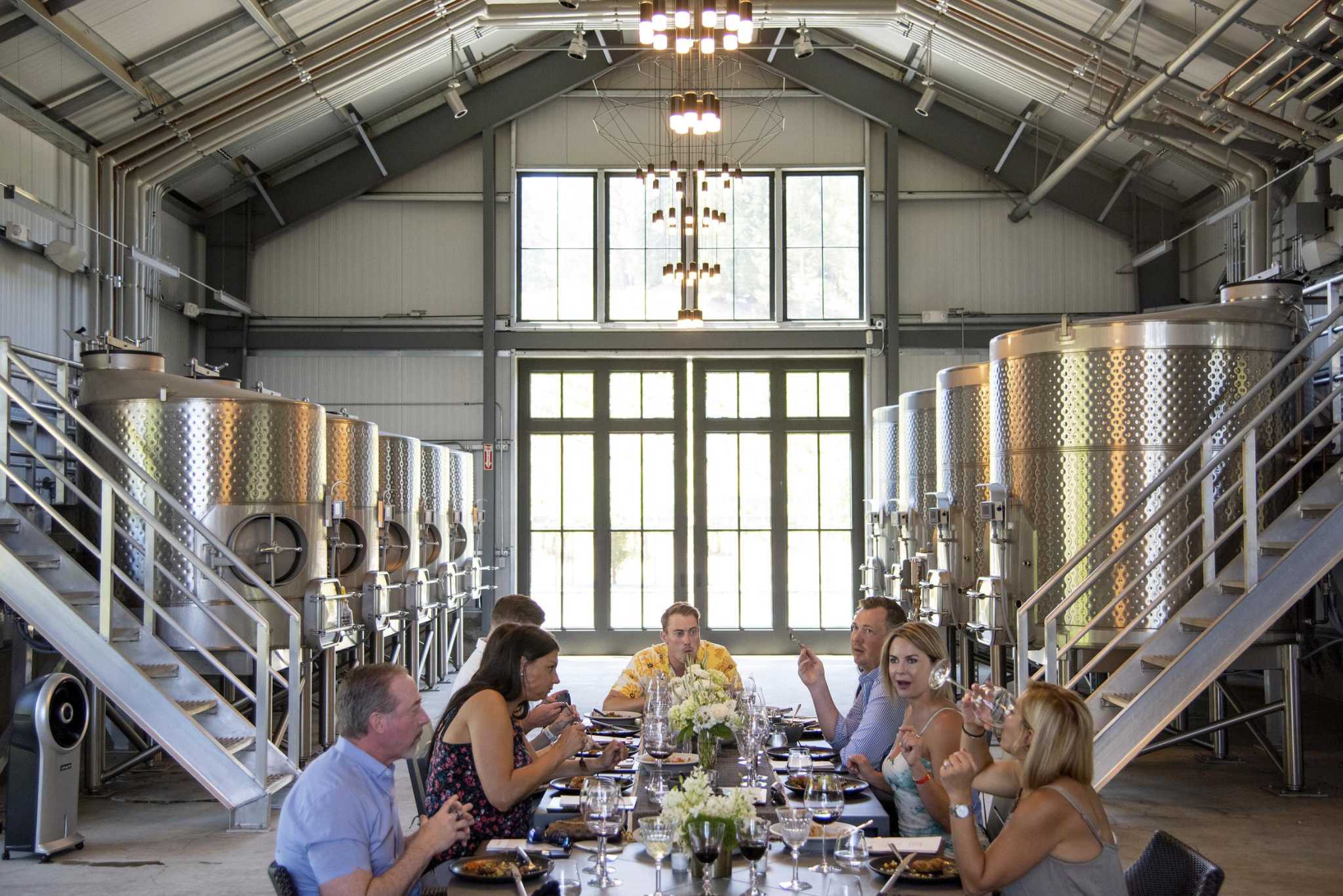 A $550 flight over the vineyards of Carneros in a vintage airplane. Glasses of Champagne in a limo ride to a winery, starting at $850. Private tutorials with Wine Country chefs on how to pull mozzarella. And for another $750, Baccarat crystal glasses engraved with your name.

These are just a few of the extravagant wine-tasting experiences available in Napa Valley right now — and the demand for them, vintners report, has never been higher. Some wineries are adding tastings that cost $500 or more, and concierges who charge more than $1,000 a day are hiring to keep up with inquiries from people wanting unique — and private — experiences.

Lindsay Johnson and Mike Lefeld of Chicago mark their engagement with a tasting at Theorem Vineyards in Calistoga.

“June is typically not a big month for wine hospitality here, especially for high-end reds,” says Tim Martin, owner of Tusk Estates and Immortal Estate, which just began offering a $550 tasting. “But requests are off the charts. I have not seen traffic like this for years.”

With California’s pandemic restrictions ending and the weather heating up, it’s little surprise that tourists are flocking to Wine Country. But this version of wine tasting is a far cry from what the masses who descend on the busy tasting bars along Highway 29 experience. Bills for these high-end Napa vacations can easily add up to tens of thousands of dollars; some vintners even expressed surprise at how quickly their priciest offerings are selling, considering the economic impact of the pandemic.

Tor Kenward, owner of Tor Wines in St. Helena, wasn’t expecting a huge rush when he started hosting a new premium wine tasting last year called the Black Magic Experience. For $950 per person, visitors can tour marquee-name vineyards like To Kalon, Vine Hill Ranch and Dr. Crane, whose fruit goes into his Black Magic Cabernet. Given the high price tag, Kenward thought it would take some time to generate interest in the wine tasting. And yet, “We have a way greater demand for it than we’re able to take care of right now,” he says. 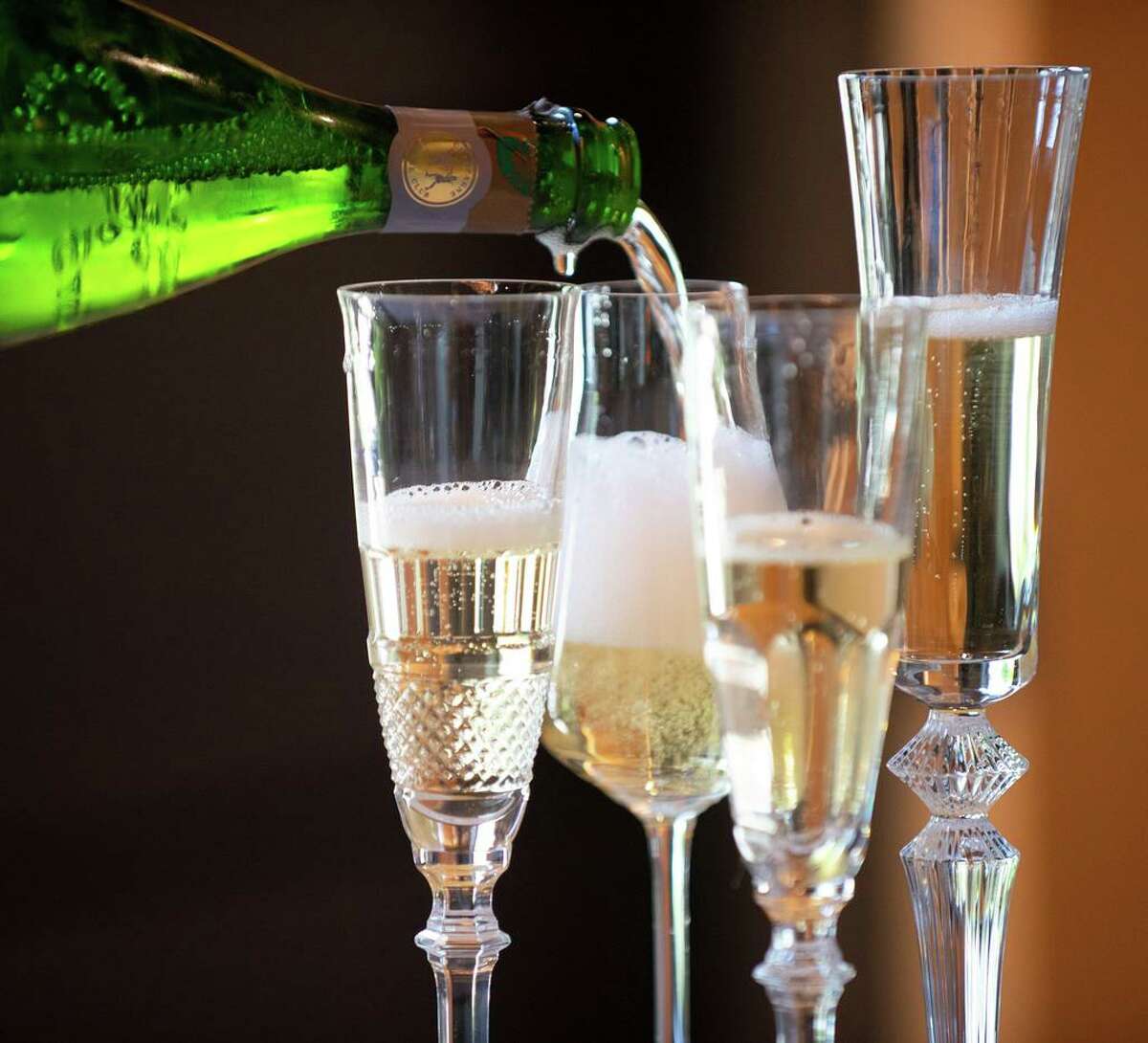 Champagne is poured into fine crystal flutes at Theorem Vineyards in Calistoga.

It’s a sharp twist from recent fears that the valley was sliding into a tourism downturn due to the COVID-19 crisis and the 2020 wildfires. Now, the air is clear, the orange sky of 2020 a distant memory. The wealthy appear eager to spend their money in Napa Valley.

That there’s ready cash for such luxe leisure pursuits could be due to the larger economic patterns of the moment: According to the Institute for Policy Studies, America’s billionaires increased their fortunes by 45% during the first 12 months of the pandemic. But there’s also pent-up demand from non-billionaires who are ready to travel and spend some money again. Theorem Vineyards, located on Diamond Mountain in Calistoga, is receiving more requests for tastings than it can accommodate, says owner Kisha Itkin.

That goes for the standard experience at Theorem, which involves a tour, a tasting of three to four wines and a cheese plate ($150-$250), as well as for its pricier offerings: a tasting that involves a limo ride from your home or hotel with Champagne, followed by a private food-and-wine pairing ($850-$1,500 per couple, depending on the driving distance); and the Theorem Vineyards Baccarat Experience, which provides a custom-engraved crystal wine glass made by the French company Baccarat ($750 per person). 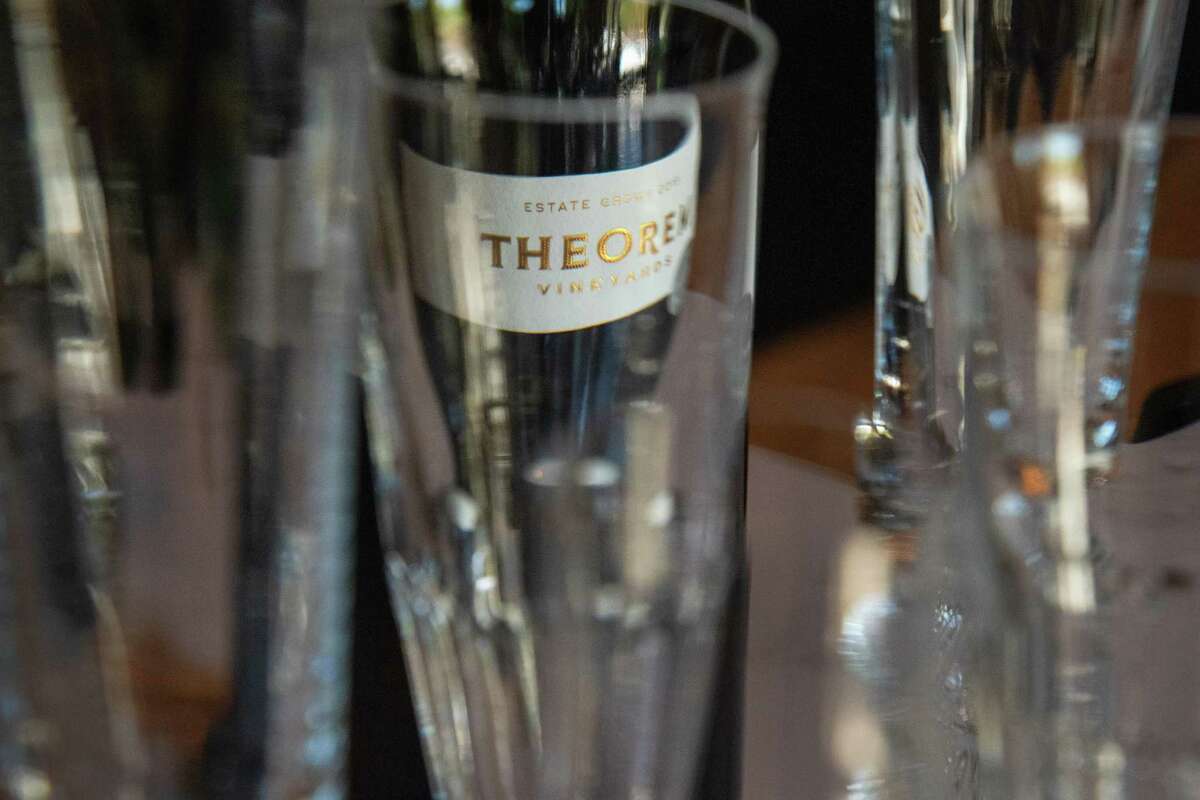 Theorem is receiving more requests for tastings than it can accommodate, owner Kisha Itkin says.

A lingering desire for social distancing may also contribute to the high demand: A private experience can now command a premium. “People are definitely willing to pay a little more because it’s so private,” says James Cerda, Theorem’s vice president of sales and marketing.

Plus, with many Americans still wary of international travel — and many countries still not open for tourism — domestic destinations like Napa and Sonoma are likely getting some of that summer-trip traffic. And many of those traveling there likely want to do something special. Experts say that as the pandemic ends, people are seeking out more adventurous, once-in-a-lifetime experiences, perhaps because COVID was such a stark reminder of our mortality.

Angela Duerr, owner of the concierge service A Cultured Vine, which plans luxury experiences in Napa Valley, says interest in high-end experiences in Napa is the highest she’s seen in years. “It’s like they turned the faucets on really high,” Duerr says. She had to hire a new employee last month just to keep up with the requests.

Duerr’s clients, she says, are not content to have the same wine-tasting experience they had on their last trip to Napa — nor do they want something that can be arranged via a Wine Country booking service like CellarPass.

“I need to come up with things that you couldn’t have done on your own,” says Duerr. “It could be something like: Let’s get on a helicopter, go for a ride, land next to a vineyard, now you’re under this 500-year-old oak tree and it’s nothing but you and the winemaker and a table that’s already set.” 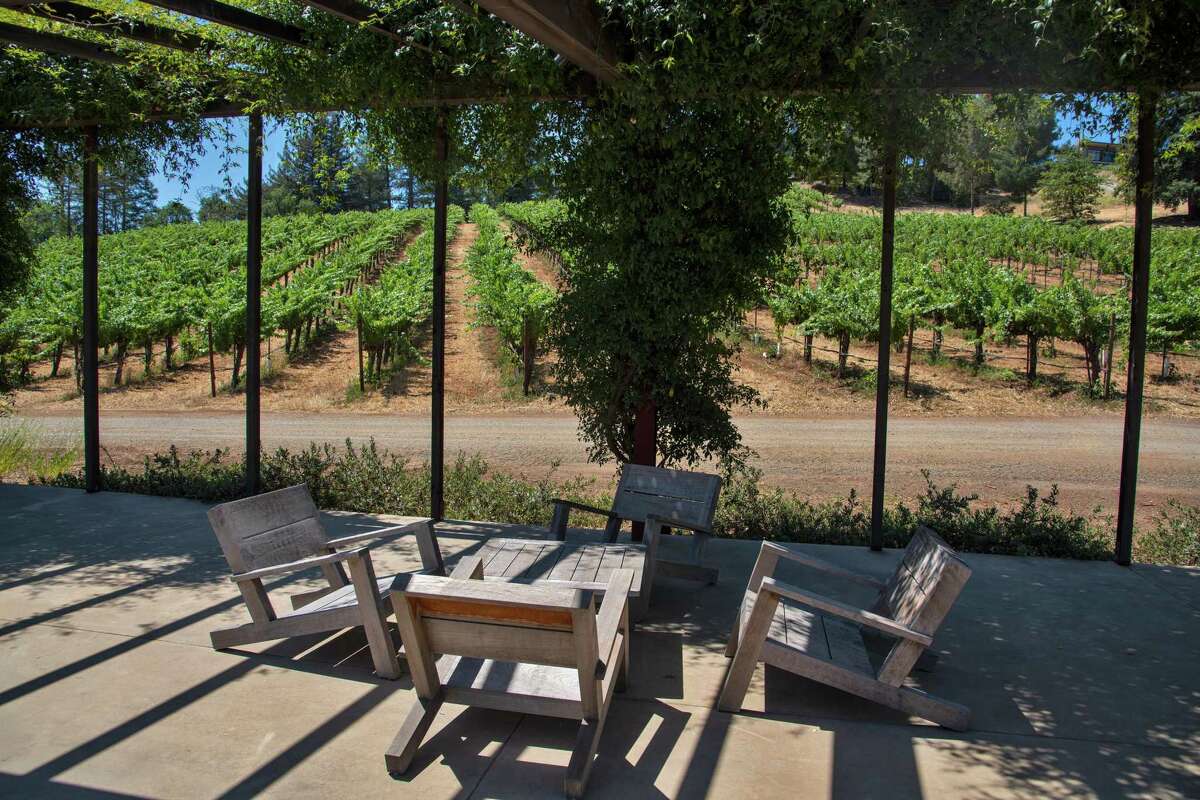 An outdoor seating area at Theorem Vineyards includes a view of grapevines.

For that, clients pay up: Duerr recently planned a trip for a 10-person group with a total price tag of about $80,000, and another for a set of three couples that ended up near $40,000, including airfare. Contributing to those bills are a rental house or hotel, private chef dinners and Duerr’s own fee, which begins at $1,600 for two days of trip planning for up to four people. (For larger groups, it starts at $2,200.) Those sums also account for the expectation that a group will spend at least $2,000 on wine at each winery it visits.

For vintner Shannon O’Shaughnessy, tourists’ desire for special additions has helped fuel her new wine brand Aileron Estates, which launched during the pandemic. A pilot who loves flying, she began offering biplane flights in addition to tastings. For $550, you get about 20 minutes in the air — complete with some loopy “aerobatics,” if you want them — in vintage, open-cockpit aircraft. (It gets pretty loud, O’Shaughnessy warns.) Boxed lunch is available at an additional cost. Later, you head to Brasswood in St. Helena, where she hosts tastings.

“Small wineries are usually vying to get attention and to try to get people to come for tastings,” she says. “And now I have so many requests that it’s starting to feel like a full-time job.”

It’s possible that Napa’s current luxury-tourism boom is a bubble, and that it could burst. The region’s famed wine industry faces plenty of obstacles: It’s struggling to attract Millennials, and wine consumption overall is not growing in the U.S. If the 2021 fire season — which could be severe in California — proves as widely damaging to the grape harvest as 2020’s was, that could spell serious damage to Napa Valley’s economy. The area’s prestige may be strong enough to withstand a crisis like that, or interest in its fancy wine excursions could fade.

But for now, these upmarket experiences point to the way that wine sales have evolved. Luxury wine customers are less inclined to buy wine sight unseen than they might have been in the past, when a 90-plus-point score from a trusted critic was enough endorsement. Today, those customers want to walk through the vineyard, spend real time with the winemaker and snap some memorable photos before buying. Helicopter rides and engraved crystal help sweeten the deal.

Still, some of the new high-end offerings are old-school: just tastings of expensive wine.

Immortal Estate, which calls its new $550 offering the 100-Point Experience, involves a tasting of four wines, bottles that sell for $75 to $303. The allure, according to Martin, the owner: Two of those wines earned 100-point scores from the Wine Advocate. The $550 fee is a steep one for four pours, but Martin says it’s meant to signal that this is something only for hard-core wine collectors.

“To be able to pull from our library,” says Martin, “there has to be some kind of fee to separate the looky-loos from the people who are serious.”

Kenward, owner of Tor Wines, says people — including customers — even tell him that he should charge more for wine. (His most expensive wine, the $450 Black Magic, recently got a surge of publicity after golfer Phil Mickelson drank it out of a trophy in an Instagram video.) At one point, Kenward says, a friend of his “who sells wine to the black-card people” talked him into charging $155 for a Chardonnay, as opposed to Kenward’s typical $85. All 90 cases sold out in one day, surprising even Kenward, who admitted it’s always a shock when an expensive wine sells out so quickly.

“A lot of people predicted that we’d have the Roaring ’20s after the pandemic, and maybe they’re right,” Kenward says. “But to be honest, it feels a little crazy.”

Home Videos The WORLD of WINE – Wine News. Cheap wine, tasting notes and cooking with wine The World of Wine – May 2021 … END_OF_DOCUMENT_TOKEN_TO_BE_REPLACED

How to visit Napa Valley on a Budget. In this video Carson and I explain a few ways to enjoy Napa on the cheap. Tip and advice about how to visit Napa … END_OF_DOCUMENT_TOKEN_TO_BE_REPLACED

Home Videos Get To Know Argentina Wine | Wine Folly If you love Malbec, Argentina is your ultimate wine region. But that’s not … END_OF_DOCUMENT_TOKEN_TO_BE_REPLACED