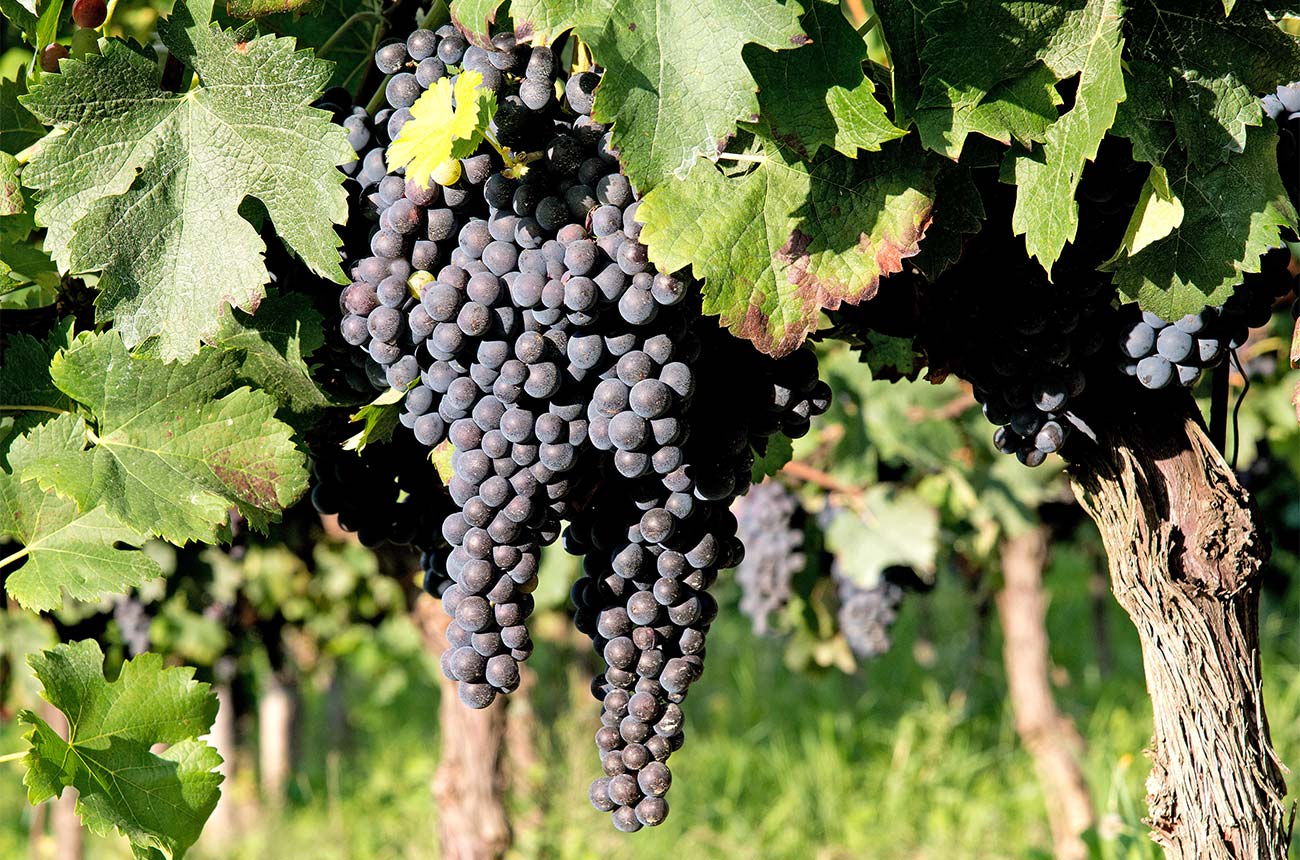 Grignolino is a wine named after the grape that is native to the Monferrato hills in the Piedmont region of Italy. Light in body and colour, with hues ranging from deep pink tourmaline to high-grade ruby, Grignolino is clean and stimulating, packing in aromas and flavours of berry, herbs and spice. Its bright acidity and freshness make it remarkably food-friendly.

It derives its name from the Piedmontese word grignolè, which means seeds. The word also refers to a grimacing expression, which would likely result from biting into something acidic or tannic. These are fair associations since Grignolino has remarkable tannins and carries more pips in each small berry than most other grape varieties. One can imagine that the resulting wine might cause a grimace – but more likely a smile – because Grignolino wines offer undeniable charm and energy.

‘In many ways, Grignolino is like a summertime version of Nebbiolo, with bright aromas of rose, sage, and white peppercorn but often more wild strawberry than dark, sour cherry, and is best enjoyed slightly chilled,’ says Kirk Peterson, a writer, educator and Italian wine ambassador in the US. ‘It has wonderfully crisp, crunchy acidity and a considerable amount of lip-pursing fruit tannins.’

Henry Davar, an instructor at Vinitaly International Academy, agrees. ‘Grignolino wines offer an aromatic profile not dissimilar to Nebbiolo, and have a similar sinewy structure – albeit on a smaller scale,’ he says.

Back in the 13th century, Grignolino was abundant, well-received and demanded similar prices to Barolo. The attraction was its pale translucent hue and light mouthfeel which set the wine apart from the bigger, richer wines of the area. The wine became unfashionable in the 1970s, when sweet wines grew in popularity.

All the while, neighbouring grapes of the region, such as Nebbiolo and Barbera, started to take centre stage throughout the world. As a result, Grignolino was at risk of disappearing from Piedmontese viticulture.

Today, it is experiencing a rediscovery by fans of native vines and of fresher wine styles.

‘Grignolino is an example of the shift happening away from “big blue” in the past decade,’ says Davar. ‘The native grapes of Italy are beneficiaries of this shift, as some of our finest wines are made from grapes which express in the red fruit spectrum.’

‘Furthermore, wine drinkers are more educated to the diversity of wines,’ says Peterson. ‘They are getting over the idea that red wines have to be a behemoth to be delicious, and finally embracing more fresh, vivacious red wine styles.’

Primarily grown in the Alessandria and Asti provinces in Monferrato, Grignolino, like its neighbour Nebbiolo, is an excellent interpreter of its origin. Soil and site sensitivity translate to remarkable diversity. The two most popular areas that Grignolino comes from are Asti and Monferrato Casalese.

In the Grignolino d’Asti denomination, the vines grow in sandy soils which lend to lighter, more perfumed wines. The Grignolino del Monferrato Casalese denomination, located just to the north, is known to produce wines with more heft and richness due to marly clay and calcareous soils. Looking closer, the soils in this area are light in colour – almost white.

The Langhe has historically been an excellent place to make Grignolino, and although rare today the wines are worth exploring.

A versatile wine, Grignolino works well with many regional dishes of Piedmont, such as steak tartare and poached rabbit.

‘On the international table, it makes a wonderful match for duck, lighter pork dishes, and all manner of charcuterie,’ says Peterson.

Home Videos The WORLD of WINE – Wine News. Cheap wine, tasting notes and cooking with wine The World of Wine – May 2021 … END_OF_DOCUMENT_TOKEN_TO_BE_REPLACED

How to visit Napa Valley on a Budget. In this video Carson and I explain a few ways to enjoy Napa on the cheap. Tip and advice about how to visit Napa … END_OF_DOCUMENT_TOKEN_TO_BE_REPLACED

Home Videos Get To Know Argentina Wine | Wine Folly If you love Malbec, Argentina is your ultimate wine region. But that’s not … END_OF_DOCUMENT_TOKEN_TO_BE_REPLACED