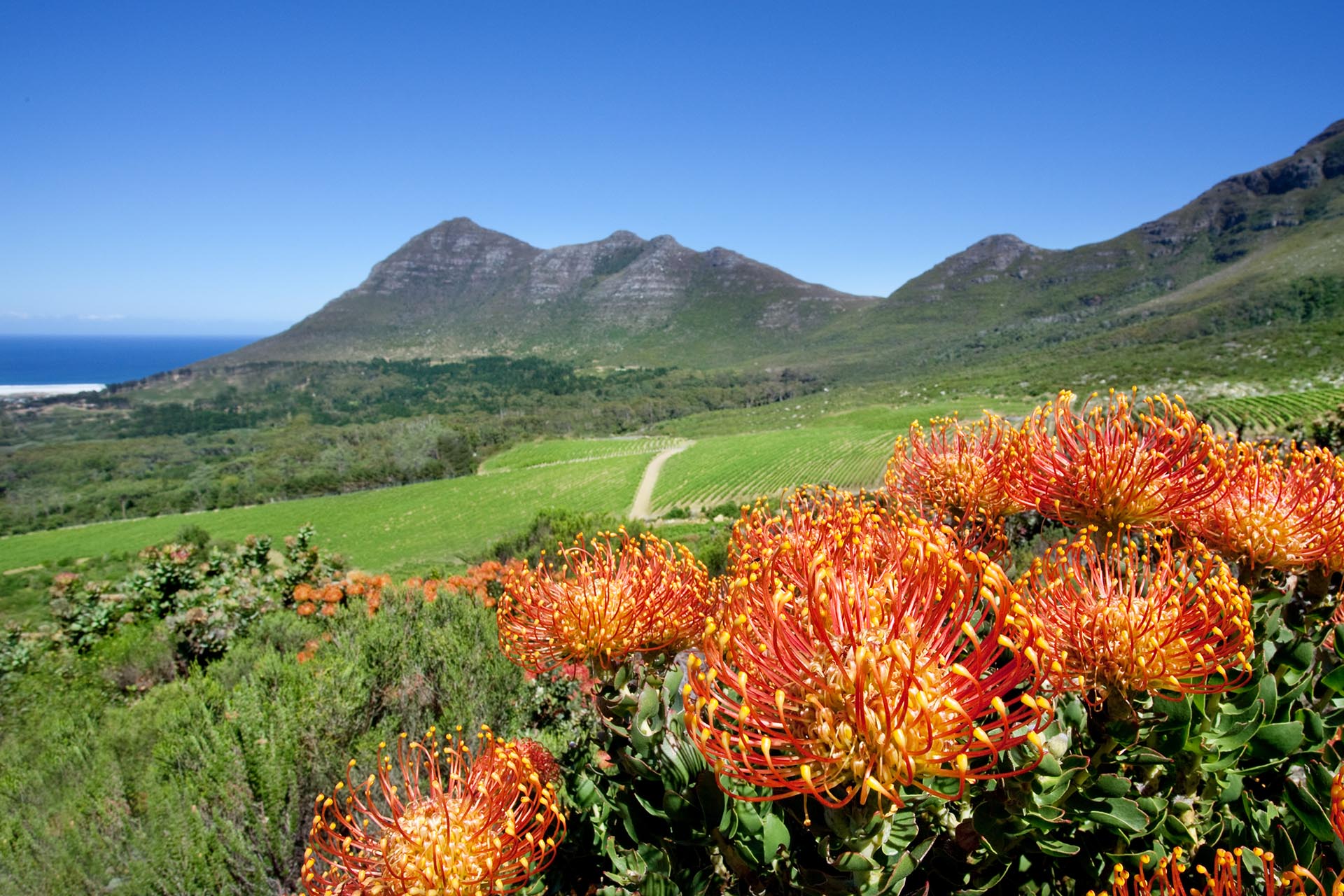 Stroll off the beaten track of a mountainside or valley vineyard in the Western Cape winelands of South Africa and step into wild, straggly vegetation of every shape and size. Brushing through these bushes releases many scents: heady dried herbs, wildflowers, pungent spice and more.

This is fynbos, the Afrikaans word meaning fine-leaved plants. Fynbos is composed of around 8,500 species from several key families—Restionaceae, Proteaceae, Ericaceae, Rutaceae and Iridaceae—many endemic to and part of the Cape Floristic Region, or the Cape Floral Kingdom.

UNESCO added the Cape Floral Region to its World Heritage List in 2004, citing it as one of the world’s greatest centers of terrestrial biodiversity.

Fynbos vegetation thrives in poor soils under tough climatic conditions and the Cape’s hot, dry summers. Many types of plants from the fynbos biome can be found in close proximity to vineyards in the Cape Winelands, and can potentially influence a wine’s aromas or flavors due to the spread organic materials like plant oils or pollen.

The earthy melange of herbal and floral fragrances that fynbos offers can brings to mind Syrah, Grenache and Mourvèdre, alone or blended. While these varieties may be often associated with the Rhône Valley, they are also widely grown in the Cape.

The South African red wines of today promote an expressive aromatic range of fynbos influence. The aromas can be quite intense. After rain, the scents are fresher and purer, with the expression of petrichor—an earthy smell produced after rain falls on dry soil—elevating aromatic complexity.

The composite nature of the fynbos plants generally makes it difficult to isolate any one aroma. Buchu, one of many species in the genus Agathosma, meaning “good fragrance,” is an exception. It is highly aromatic, resembling a peppery note often found in Syrah (the peppery taste in Syrah comes from rotundone, a sesquiterpene).

The perception of “savoriness” in a wine, led by tones of herbs and spices, may also be augmented by fynbos characteristics.

Richard Kershaw, MW, produces namesake wines that include Syrah grown in Elgin, a cool-climate region. He believes there are several climatic factors that create the elegant, medium-weight expression the area is known for.

“The end result is a translucent wine of medium-dark color, the accent on red fruit with black cherries but also vibrant spice, more savory than sweet,” says Kershaw.

In warmer areas like the Swartland, spicy, peppery notes can still show intensity, but are often deeper and partnered with more forward fruit characteristics.

Overall, given the breadth of different species of fynbos, it’s easy to see why the many varied scents it encompasses could make for a confusing wine tasting note.

But even if fynbos can’t be defined as expressly reminiscent of a particular or familiar smell, its warm-hearted wildness should remind you of the attractively generous wines of South Africa’s Cape Winelands, and the natural beauty that surrounds it.

Home Videos The WORLD of WINE – Wine News. Cheap wine, tasting notes and cooking with wine The World of Wine – May 2021 … END_OF_DOCUMENT_TOKEN_TO_BE_REPLACED

How to visit Napa Valley on a Budget. In this video Carson and I explain a few ways to enjoy Napa on the cheap. Tip and advice about how to visit Napa … END_OF_DOCUMENT_TOKEN_TO_BE_REPLACED

Home Videos Get To Know Argentina Wine | Wine Folly If you love Malbec, Argentina is your ultimate wine region. But that’s not … END_OF_DOCUMENT_TOKEN_TO_BE_REPLACED