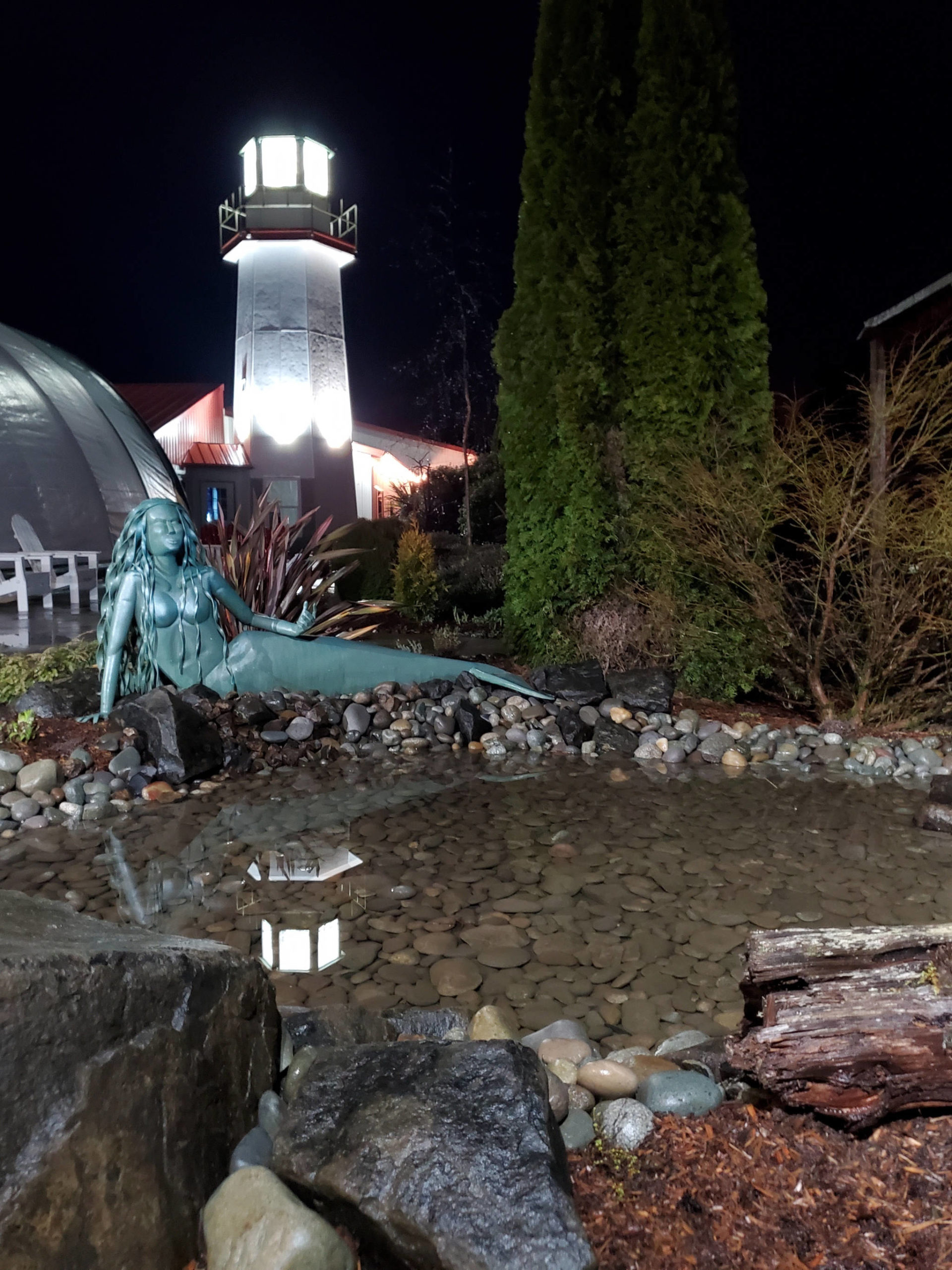 The International Mermaid Museum, the brainchild of Westport Winery founder Kim Roberts, is holding its weeklong grand-opening celebration beginning Monday. The non-profit museum is dedicated to teaching ocean ecology from seashore to sea floor, all while immersed in mermaid mythology.

Monday is, of course, International Mermaid Day, and it happens to be the 13th anniversary observance for the winery, where the museum is located.

Roberts, a former licensed architect, is designing the facility and acting as general contractor. She also designed all of the other buildings on the property.

“What we’re trying to do is immerse people, through storytelling and artifacts, in what it means to be a diver and explore the ocean,” Roberts told The Daily World just prior to ground-breaking for the museum last fall.

She intends for this project to serve as her legacy.

“We’re older now, and so are our peers in (the diving community),” she said. “And what we’ve found over the years is that we’ve all collected some amazing ocean artifacts and images — but our kids don’t want them.”

As a result, she has been able to collect numerous donations of artifacts and equipment from members of the dive community all over the country.

Mermaid groups all over the country are committed to preserving the ocean’s ecology, Roberts said, and the ones in Seattle and Portland are “super excited that this first mermaid museum is in their backyard. It really gives them a home.”

The weeklong celebration culminates next weekend.

On Friday evening, an artist reception will enable the public to meet the feature artists in the museum’s gallery including: MJ Perela from Lincoln City, Oregon, discussing the museum’s entry mosaic; Beau Finley of Westport discussing the mermaid throne and the plaza; Yosef Adams from North Cove will unveil his 12-foot-tall mermaid Gray Sea (the roadside attraction); Jamie Walsh from Aberdeen will unveil the entry sculptures.

Next Saturday’s festivities are highlighted by Secretary of State Kim Wyman presiding over the museum’s ribbon-cutting at 11 a.m., a day of mermaid meet-and-greets and a Pro-Am clam chowder competition.

Next Sunday, there’s a Mermaid egg hunt in the gardens; Una the Mermaid, among others, performs in her tank, and craft kits and handouts for children.

Una the Mermaid and others will greet visitors all week long. Una appears in a 900-gallon freshwater tank. A “professional mermaid” since 2012, she is the producer and owner of the Portlandia Mermaid Parade and the Traveling Fanta-Sea Cove in Oregon.

11 a.m. to 1 p.m. — Mermaid egg hunt in the gardens at Westport Winery Garden Resort. Kids need to get their free egg bag in the museum prior to starting their hunt. This event is for children up to age 10. All eggs will be hidden in plain sight. Kids need to come back to the museum after their hunt to see if they have the special egg that gives them an extra prize.

11 a.m. to 6 p.m. — Mermaid Eternity, Princess of the Great Pacific Garbage Patch, performing and posing with craft kits and handouts for kids

11 a.m. to 6 p.m., — Olive the Alchemist Mermaid, performing and posing in the splash pond

Due to COVID guidelines, the weeklong event will be held with social distancing observed and masks required. All the events during the grand-opening week are free to attend, however, reservations are required for all evening events. You can make reservations by calling Westport Winery at 360-648-2224 between 11 a.m. and 6 p.m.

All ages are welcome. Children under age 12 must be accompanied by an adult. The museum will be open daily from 11 a.m. until 6 p.m. with free admission through April. It is located on the grounds of Westport Winery Garden Resort — located halfway between Westport and Aberdeen — off State Route 105 at 1 South Arbor Road.

Home Videos The WORLD of WINE – Wine News. Cheap wine, tasting notes and cooking with wine The World of Wine – May 2021 … END_OF_DOCUMENT_TOKEN_TO_BE_REPLACED

How to visit Napa Valley on a Budget. In this video Carson and I explain a few ways to enjoy Napa on the cheap. Tip and advice about how to visit Napa … END_OF_DOCUMENT_TOKEN_TO_BE_REPLACED

Home Videos Get To Know Argentina Wine | Wine Folly If you love Malbec, Argentina is your ultimate wine region. But that’s not … END_OF_DOCUMENT_TOKEN_TO_BE_REPLACED