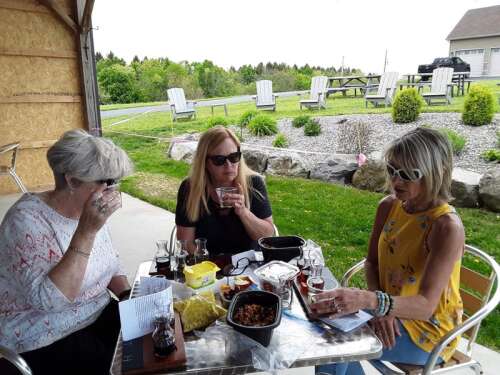 Special to The Press

When Dana Woolley gave her husband a wine making kit, she never thought their life would be forever changed.

Years later, Dana and her husband, Richard, are making wine at their own vineyard in New Tripoli, inspired by that initial gift.

“We had a number of good friends we’d give wine to every year and they encouraged us to keep going,” he said.

Month by month, the Woolleys were further encouraged by other friends and wine aficionados.

“We became friendly with the owner of Setter Ridge Winery in Berks County,” he said. “He’s a well-respected winemaker with his vineyard in Pennsylvania.

“He kind of helped me get started.

“In the very first year we had the benefit to use their equipment.

“You have to have pumps and everything else, so the first batch of wine was being made there. And while we were doing that, we were building our own winery.”

Living and working at the winery is not all wine and roses, however.

“On the other hand, the commute is not that bad and working in the vineyard is a good stress reliever. You kind of lose yourself.”

Throughout it all, the Woolley’s maintain their first careers.

“Dana works for Blue Cross, and I work for Weather Trends so we both have full time jobs,” said the meteorologist. “Sleep is overrated.”

Richard Woolley said this was a good winter for the grapes.

“The deep snow acted like a blanket,” he explained. “Cold keeps the grapes and the vines are not waking up early.

“That helps us from the standpoint of a late spring frost.

“In 2019, we lost the first crop to spring frost. That one or two killing frost is very bad for grapes.

“The vines came out slowly this year.“

Weather is not the only concern for winemakers.

“Spotted lantern flies are very damaging to the vineyard,” Woolley said. “We’re thinking and hoping we figured out a program that keeps their numbers down.”

Work at the vineyard is year-round.

“[In spring] we do a couple of tasks including pruning the grapes,” Woolley said. “It’s called down hilling, taking advantage of the protective nature of soil to keep them from freezing.”

John Babicz, who has been working at the Vineyard for the last six years, spoke with The Press.

“The more grapes you have on the vines, the less the flavor,” Babicz said. “By limiting the number of grapes on the vine, the flavor is improved.”

“From a vineyard and winemaking perspective, I would say fall is our busiest time,” Woolley said. “You’re doing harvest and wine pressing,”

It was Dana Woolley who suggested naming the vineyard after her husband’s two loves that inspired the name Weathered Vineyards.

The couple continues to learn about the life of grapes and the process of wine making.

“I learned a lot from him,” Babicz said. “I kind of fell in love with the vineyard, and the process that originates from the vineyard and ends up in the class.”

The Woolleys are gearing up for a good season.

“We have live music on the patio many weekends,” Woolley said.

James Supra and Sarah Ayers kick off the season on May 28.

“We’re not quite back to normal,” Woolley said. “Over the course of the last year, we had a cadre of regulars who showed up in the winter over COVID.”

In the future, Woolley is hoping to add a working kitchen to attract visitors and minimize their dependence on food trucks.

“Wine is one of the most civilized things in the world,” Hemingway once said, “and it offers a greater range for enjoyment and appreciation than, possibly, any other purely sensory thing.”

The groups of friends gathered at the Weathered Vineyards in mid-May were ready to prove just that.

PRESS PHOTO BY ANNA GILGOFF First timers Janet and Caris Grim, and Shelly Dorn enjoy a warm day outdoors. “We try to hit a winery once a month,” Dorn said.

Richard Woolley said his vineyard is not unlike the growing region of Bordeaux, France. Weathered Vineyards was established in 2013, on scenic Carpet Road in New Tripoli.

PRESS PHOTOS BY ANNA GILGOFF At the Weathered Vineyards Tasting Room, John Babicz offers samples and wines by the glass or bottle.

Kellly Koval (right) is the author of a wine blog called Sip,Chew, Sip met her friend Kim Keiper at the vineyard where they sampled a flight of wines.

Home Videos The WORLD of WINE – Wine News. Cheap wine, tasting notes and cooking with wine The World of Wine – May 2021 … END_OF_DOCUMENT_TOKEN_TO_BE_REPLACED

How to visit Napa Valley on a Budget. In this video Carson and I explain a few ways to enjoy Napa on the cheap. Tip and advice about how to visit Napa … END_OF_DOCUMENT_TOKEN_TO_BE_REPLACED

Home Videos Get To Know Argentina Wine | Wine Folly If you love Malbec, Argentina is your ultimate wine region. But that’s not … END_OF_DOCUMENT_TOKEN_TO_BE_REPLACED