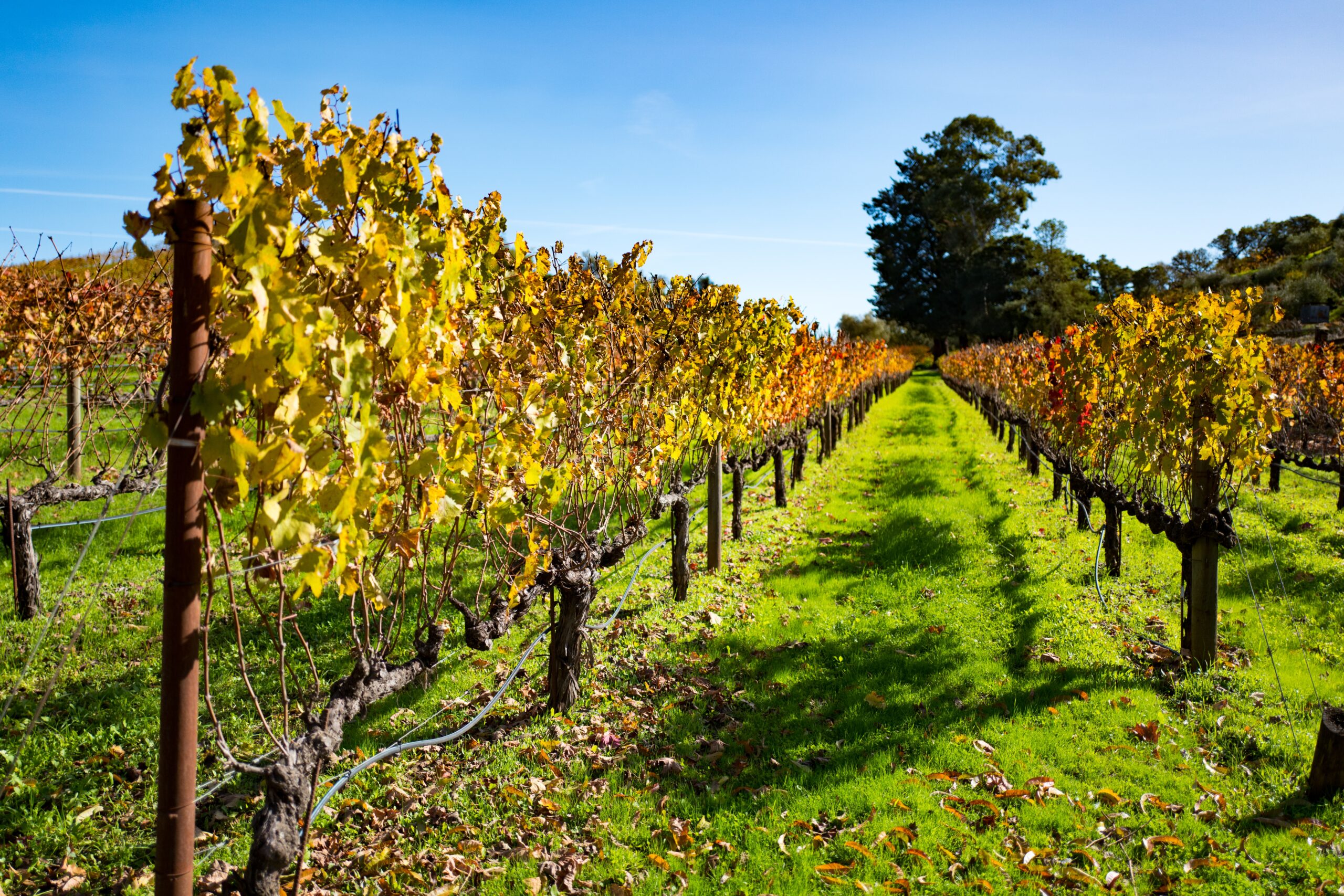 Sometime around 1990, an exotic winged menace arrived in Southern California. No one knows exactly when or how it got there.

Most likely, it evaded agricultural inspectors as a clutch of eggs stuck to a plant shipped from its home turf in the Southeast United States. There, the glassy-winged sharpshooter is the primary carrier of Pierce’s disease, a grapevine killer that thrives in the mild southeastern climate, where it makes growing pinot noir, chardonnay and other European varietals nearly impossible. Within a decade of being spotted in California, the transplant had triggered a major Pierce’s disease outbreak that destroyed hundreds of acres of those prized varietals in the Temecula Valley, a winegrowing region between Los Angeles and San Diego.

There’s no cure for Pierce’s disease, which is caused by the bacterium Xylella fastidiosa and carried by sap-sucking insects that feed on grapevines. Growers finally contained the Temecula epidemic by removing diseased vines and using biological and chemical agents to control the glassy-winged sharpshooters—leafhoppers about half an inch long that flourish in citrus orchards near vineyards. A massive investment in research, monitoring and biocontrol efforts has mostly contained the insect, which is now restricted to Southern California and the southern Central Valley.

But Pierce’s disease experts see a potentially more devastating threat on the horizon.

“There’s been a lot of paranoia about glassy-wing and how it’s going to be the end of the world,” said Matt Daugherty, an expert in the ecology and management of vector-borne plant pathogens at the University of California, Riverside. “But it turns out that the native is far more efficient at transmitting, especially in the northern part of the state. Maybe we need to be worrying more about that.”

Pierce’s disease has sporadically afflicted California winegrowers since at least the 1880s, when the still-mysterious malady wiped out 35,000 acres in the Los Angeles Basin. Outbreaks over the years were mostly confined to vineyards near the rivers, streams and pastures where native sharpshooters bred. The appearance of the much larger, wider ranging glassy-winged sharpshooter—once dubbed the pterodactyl of sharpshooters by an industry insider—elevated a relatively obscure parochial disease into a statewide concern.

Glassy-winged sharpshooters are unlikely to invade Northern California’s major winegrowing regions, even with climate shifts, without a substantial increase in plantings of favored hosts like citrus or olives.

If recent modeling holds true, California could see wetter winters. And research from the 1940s and ’50s found higher numbers of blue-green sharpshooters following wet winters and springs, Daugherty said. He and his colleagues found a similar result for a 2013 paper published in Plant Pathology, when they analyzed close to a decades’ worth of data on the insects in Napa.

“Those conditions that we thought were more favorable for blue-greens look like they are,” he said. “A few wet years in a row, which tend to also be warmer winters, there was an uptick.”

Even more troubling, rising temperatures could deprive grapevines of the one defense that seems to prevent chronic infections: cold winters.

Warmer winters will increase the likelihood that Xylella infections survive and become chronic, said Rodrigo Almeida, a Pierce’s disease expert and professor of emerging infectious disease ecology at the University of California, Berkeley. They’re also likely to extend the window of opportunity for new infections to get established, he said.

Vector-borne diseases are particularly challenging to understand and control because so many factors affect the complex interactions between pathogens, carriers and their hosts. Xylella is spread mainly by sap-sucking leafhoppers, which acquire and transmit the pathogen while feeding on fluid in xylem, the tissue that shuttles water and nutrients throughout a plant. The bacteria gradually shut down water flow as they colonize a plant, causing discoloration along leaf margins, desiccated fruit, dieback of vine branches and, finally, death.

Xylella infects a broad range of plants but unfortunately for vintners—and oenophiles—the most susceptible plant happens to produce the world’s finest wines.

That may explain why basic research on Pierce’s disease exploded after a major epidemic struck Napa and Sonoma counties in the early 1940s, just as the United States entered World War II.

“You can tell the epidemic must have been pretty impressive,” said Alexander “Sandy” Purcell, a pioneering Pierce’s disease expert and emeritus professor at UC Berkeley. “They had all these young men they hired to map vineyards and pull out diseased vines, and that used up a lot of gas and tire rubber, which was in short supply and very precious during World War II.”

Purcell was a graduate student in the early 1970s when he first suspected that cold temperatures might heal afflicted grapevines.

He was mapping symptoms in Napa Valley vineyards when he noticed that some vines he’d diagnosed as diseased one summer didn’t have symptoms the next. Purcell wondered if the grapevines could have recovered somehow. He asked a member of his dissertation committee, William Hewitt, aka “Mr. Pierce’s disease.” Hewitt was the world-renowned virologist who’d named the disease after the plant pathologist who first described it in 1892.

Hewitt, Purcell recalled, answered the question succinctly. “He said just one word: No.”

At the time, scientists still believed Pierce’s disease was caused by a virus, which grapevines rarely recover from. But Purcell wasn’t so sure. He had read about old experiments using sharpshooters to study a similar disease in peaches, where scientists in Georgia had to travel north to Tennessee to find a place without disease so they could run controlled trials.

The experiments failed in Tennessee, using the same methods that produced reliable transmission in Georgia. “What was the difference? They could never explain that,” said Purcell.

But Purcell thought he could. He suspected the plants had been infected and recovered but the cooler climate made the symptoms more difficult to recognize. Around the same time, it became clear that bacteria were the culprit. His recovery hypothesis no longer seemed impossible.

“When I first got this idea about recovery, I knew I’d have to have a lot of data to overcome the conventional wisdom that plants don’t recover,” Purcell said.

If infection depended only on the carriers, then he should be able to calculate the probability of infection based on insect abundance and their ability to transmit infections. He lowballed estimates on the average number of sharpshooters per plant and the average percentage of insects capable of transmitting disease to get conservative estimates for a probability model. His model predicted that 100 percent of grapevines would be infected by the end of June.

“You never see that. Only when you put recovery in the equation do you get more reasonable results,” he said, referring to the healing power of cold temperatures.

Years later, Purcell also showed that the timing of infection with Pierce’s matters. Every month from April through August, he and his graduate students introduced Xylella into the growing tip of grapevine stems, where sharpshooters feed. They demonstrated that the later an infection was established, the less likely it was to survive the winter. “There wasn’t a single plant that we inoculated after May that didn’t recover,” Purcell said.

These results help explain why Pierce’s disease is considerably more severe in regions with mild climates like Florida and Texas, where symptoms appear much earlier than they do in California.

“Climate has so much to do with the ecology of this bacteria,” Purcell said.

With so many bacteria colonizing a vine, normal winters can’t knock out an infection, Daugherty said. “And if it’s a warm winter, it’s really not enough to knock out the infection.”

Scientists now have data demonstrating the “cold cure,” dating back to 1980, when Purcell cured vines by freezing them.

Although the reason it works remains elusive, Purcell feels certain about one thing: “As it gets warmer,” he said, “you’re going to get less recovery.”

Hanging Hopes on Resistance and Bio-controls

In 2000, the specter of glassy-winged sharpshooters crippling California’s multibillion-dollar wine industry led officials to declare a state of emergency. The state also created a Pierce’s Disease Control Program to minimize the toll of the pathogen and its vectors, efforts that a 2014 study estimated cost more than $100 million a year.

The study didn’t account for the 2014 outbreak in Napa and Sonoma, where the disease exploded in some of the state’s most expensive vineyards. “I saw farmers losing 25 percent of vineyards in Napa and Sonoma,” said Almeida, who studied under Purcell at UC Berkeley.

Every 20 years there’s a bad Pierce’s disease epidemic, and it’s not from glassy-winged sharpshooters, Daugherty said. “We have great datasets on glassy-wings going back to when they invaded. But the native sharpshooter, which we know has been a problem forever, we don’t have great data on.”

That complicates the already daunting challenge of reconstructing the factors that allow bacteria that usually live in plants at low levels, as Xylella often does, to suddenly mount a lethal attack.

It’s still unclear what drove the 2014 epidemic, said Almeida. “Either there are vectors flying around that we don’t know about, which is possible, or something changed.”

Researchers think what’s changing is winter recovery, he said. “Or at least that’s what’s driving some of these epidemics that we really don’t quite understand.”

Years ago, Purcell used to venture as far north as Mendocino County’s Anderson Valley, where it got too cold for Pierce’s disease, to get “clean bugs”—native sharpshooters with no detectable Xylella bacteria—for his experiments. Then one summer, on a bug collecting trip there in the early 1990s, he spotted Pierce’s disease but only in a few vines. But when he returned two years ago, Purcell said, “it was disastrous in some places.”

Pierce’s disease became problematic in the Anderson Valley in the late 1990s. “The first real problem I saw was in 1997 and ’98, when we had warmish, wet winters,” said Glenn McGourty, emeritus viticulture and plant science advisor at UC Cooperative Extension in Ukiah.

The Anderson Valley is known for its pinot noir and chardonnay, which are both particularly susceptible to Pierce’s disease. “The worst-case scenario is a warm, wet winter. That’s when Pierce’s disease really gets going,” McGourty said. “And I suspect it’s going to get worse because our winters aren’t as cold as they used to be.”

What can vintners do if they can’t count on cold cures?

Another strategy involves boosting vines’ natural defenses without affecting the grapes. Scientists at UC Berkeley harnessed “good” bacteria that induce plant resistance to dispatch Xylella by jumpstarting grapevine defenses that typically don’t respond to the pathogen. The results of the study, published in Phytopathology in 2019, suggest that beneficial bacteria could one day form the basis of a spray to control Pierce’s disease.

Until then, scientists are trying to put a system in place that can track native vector populations and serve as an early warning system.

It’s high time to invest in the type of long-term monitoring programs that have helped keep the glassy-winged sharpshooter in check, Daugherty said. “That doesn’t exist for the vector that we know is the most important in California, the native blue-green.”

Warming, especially in winter and spring, will likely result in a longer period of activity for blue-green sharpshooters “to be out there doing their thing,” said Daugherty. “And that’s a problem. If they get going earlier in the year, that means those infections are less likely to recover, especially if the cold snaps in the winter are less severe.”

Without long-term data to develop predictive tools, scientists can’t catch the disease before it takes out a vineyard.

“I’m tired of just being reactive to all these problems and playing catch up,” Daugherty said. “It gets old.”

Home Videos The WORLD of WINE – Wine News. Cheap wine, tasting notes and cooking with wine The World of Wine – May 2021 … END_OF_DOCUMENT_TOKEN_TO_BE_REPLACED

How to visit Napa Valley on a Budget. In this video Carson and I explain a few ways to enjoy Napa on the cheap. Tip and advice about how to visit Napa … END_OF_DOCUMENT_TOKEN_TO_BE_REPLACED

Home Videos Get To Know Argentina Wine | Wine Folly If you love Malbec, Argentina is your ultimate wine region. But that’s not … END_OF_DOCUMENT_TOKEN_TO_BE_REPLACED