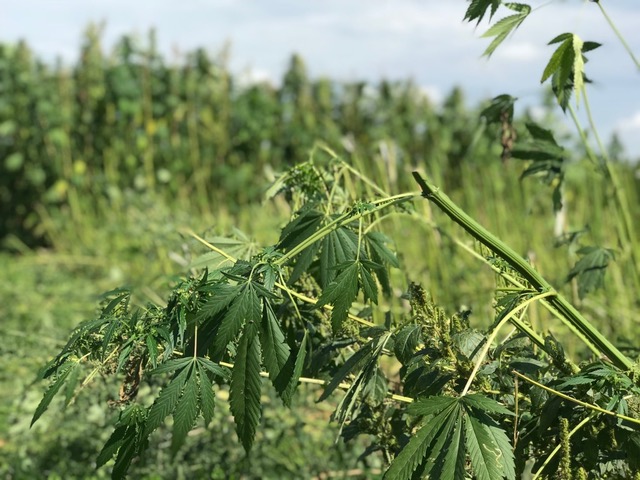 ROCHESTER, NY (WSKG) — New Yorkers over the age of 21 will be able to legally buy marijuana as early as next year, under terms of a bill agreed to by both houses of the state legislature and Gov. Andrew Cuomo.

By late 2022, adults in the state would be able to buy cannabis in retail stores, and could also sample the drug in tasting rooms, similar to wine tasting venues. They would also be able to grow a limited number of marijuana plants at home – six per person and up to 12 per household.

Both the governor and the legislature offered proposals.

New York would be the 15th state to legalize recreational marijuana if the legislature and governor can reach a deal. (Vaughn Golden/WSKG)

State Sen. Liz Krueger, a sponsor of the bill in the Senate, said the final measure more closely resembles the bill she and Assembly sponsor, Majority Leader Crystal Peoples-Stokes, had advocated for. It includes a community reinvestment fund for neighborhoods adversely impacted by the decades-long prohibition of the drug.

“It will make us the nation’s leading model for marijuana legalization,” said Krueger. “It puts racial justice in the foreground.”

50 percent of the licenses to grow and sell marijuana would be set aside for what’s known as equity businesses, which includes people from disproportionately impacted communities and small farmers. They would have access to loans, grants, and incubator programs.

The funds will come from a 13 percent sales tax to be charged on the sale of the drug. The revenues could reach $350 million dollars a year, with some of that money would also go towards combatting drug addiction. The remainder will be used to fund public education.

Melissa Moore, from the national group Drug Policy Alliance, said the measure goes a long ways to right the wrongs during the years of marijuana criminalization.

“It’s an absolute watershed moment,” said Moore, adding that over 800,000 New Yorkers were arrested for possessing small amounts of marijuana over the past 25 years, and punishments disproportionately fell on Black and brown New Yorkers. She hopes the law will “turn the page into a new era of marijuana justice.”

The legislation further decriminalizes possession of the drug, eliminating penalties for having three ounces or less of cannabis, or storing up to five pounds at home. It also would expunge the records for people with previous convictions for amounts that are no longer criminalized.

It would still be illegal to drive under the influence of marijuana, and local law enforcement agencies would get money to hire and train drug recognition experts. The bill does acknowledge that it’s difficult to measure whether the drug is influencing driving behaviors so it sets up a research study to find ways to better detect whether a driver is impaired by a cannabis product.

Local governments will have the choice of banning retail stores and marijuana tasting rooms, as long as they opt-out by the end of this year.

A vote on the measure could come as early as Tuesday.

Home Videos The WORLD of WINE – Wine News. Cheap wine, tasting notes and cooking with wine The World of Wine – May 2021 … END_OF_DOCUMENT_TOKEN_TO_BE_REPLACED

How to visit Napa Valley on a Budget. In this video Carson and I explain a few ways to enjoy Napa on the cheap. Tip and advice about how to visit Napa … END_OF_DOCUMENT_TOKEN_TO_BE_REPLACED

Home Videos Get To Know Argentina Wine | Wine Folly If you love Malbec, Argentina is your ultimate wine region. But that’s not … END_OF_DOCUMENT_TOKEN_TO_BE_REPLACED