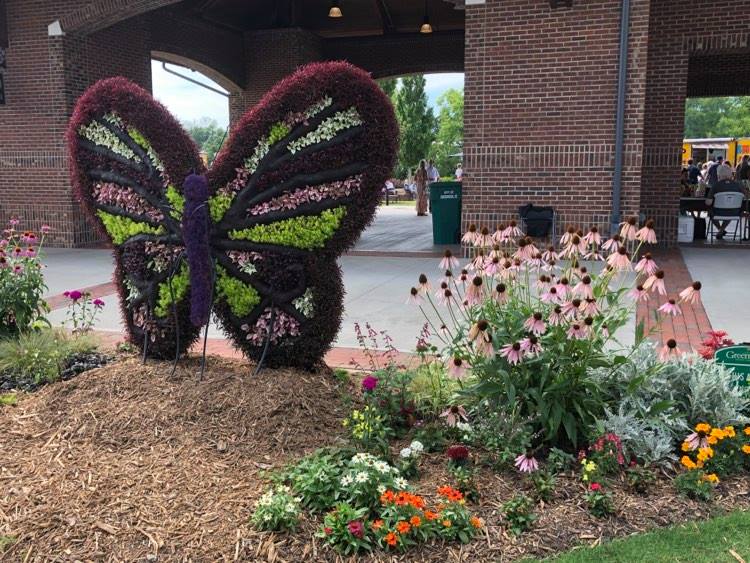 I don’t particularly have a green thumb, but I do enjoy a bit of amateur gardening — a few ferns, azaleas, peonies, daffodils, and hostas. Better yet, I love to visit flower gardens while touring other cities and states. If you are like me and love flowers, you will be especially excited to hear about the South Carolina Festival of Flowers held every June in Greenwood, South Carolina.

At this wonderful event, you’ll see thousands of colorful blooms in hundreds of fully landscaped flower beds and gardens around town. But amidst the bright snapdragons, daffodils, daisies, hydrangeas, mums, and other summer flowers and plants, visitors will discover the real stars of the festival: dozens of beautiful living topiaries.

Greenwood is located in the northwest Piedmont region, less than 1.5 hours from the South Carolina cities of Augusta, Columbia, and Greenville; just over 2 hours from Charlotte, North Carolina; and less than 3 hours from Atlanta.

Tired of the cold Pennsylvania winters, the George W. Park Seed Company moved south to Greenwood. The first South Carolina Festival of Flowers was held in 1968 in celebration of the seed company’s 100th anniversary.

That first celebration became a yearly event that thousands of visitors look forward to each summer. In 2008, living topiaries were introduced at the festival for the first time. Drawing inspiration from Disney’s famous character topiaries, Greenwood’s master gardeners went to work creating dozens of gorgeous animals, school mascots, and other fun topiaries to be showcased at the yearly flower festival.

My, How They’ve Grown

The city of Greenwood’s horticultural supervisor, Clint Price, explained how much time and effort go into each topiary. “It’s not just clipping an already-grown plant into shapes,” he said. “It is a year-long effort by several city staff members and dozens of volunteers.”

Each sculpture frame is outfitted with irrigation, stuffed with Spanish moss, and then “plugged” with hundreds — or in the case of the Fighting Gamecock topiary, thousands — of tiny plants. 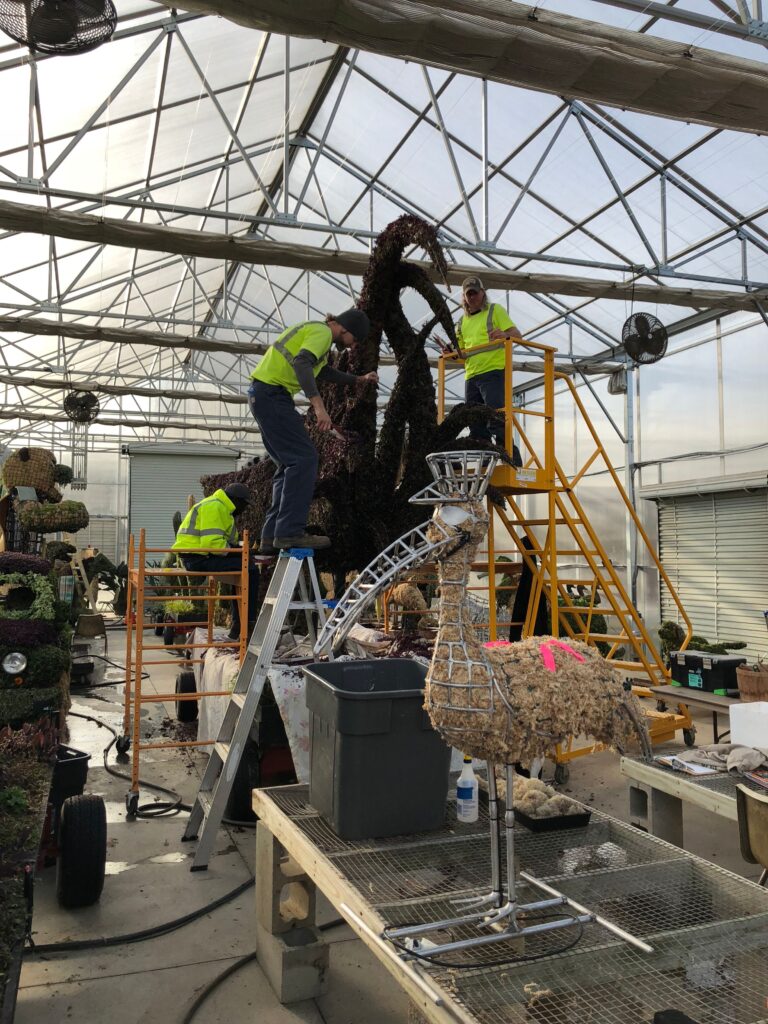 Before the festival even begins, the topiaries are transported from their year-long greenhouse home to various sites around town. Once secured in place, they are hooked up to an automatic irrigation system that keeps them watered throughout June and July.

“It is a lot of work,” said Price, “but it is a labor of love. Our horticulture team loves what they do. The volunteers are excited to help. The whole community comes together and supports the project and festival.”

Visitors will find the living sculptures scattered around Uptown and other spots. A few of my favorites are the amazingly tall giraffes at the north end of Uptown, the beautiful mermaid (be sure to look for her jellyfish friends nearby), and the 8-foot-tall mystical unicorn (new this year) standing proud in front of the library. 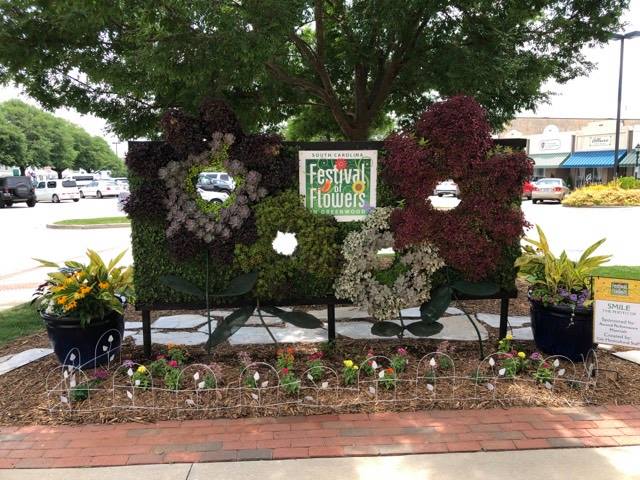 A sign for the festival (Photo Credit: Loretta Berry)

Greenwood’s South Carolina Festival of Flowers has been the recipient of many awards over the years. In 2013 and 2018, it was named the event of the year by the South Carolina Festival & Event Association. In 2019, it received top honors at the International Festivals & Events Association’s convention and expo and was spotlighted at the Southeast Festivals & Events Association’s Kaleidoscope Awards. In addition, the festival was recognized as one of the top 100 events in North America by the American Business Association.

“We are proud to receive these awards,” said Kelly McWhorter, executive director of Discover Greenwood, “but we are more proud of our community. The Festival of Flowers showcases not only our town, but who we are.” 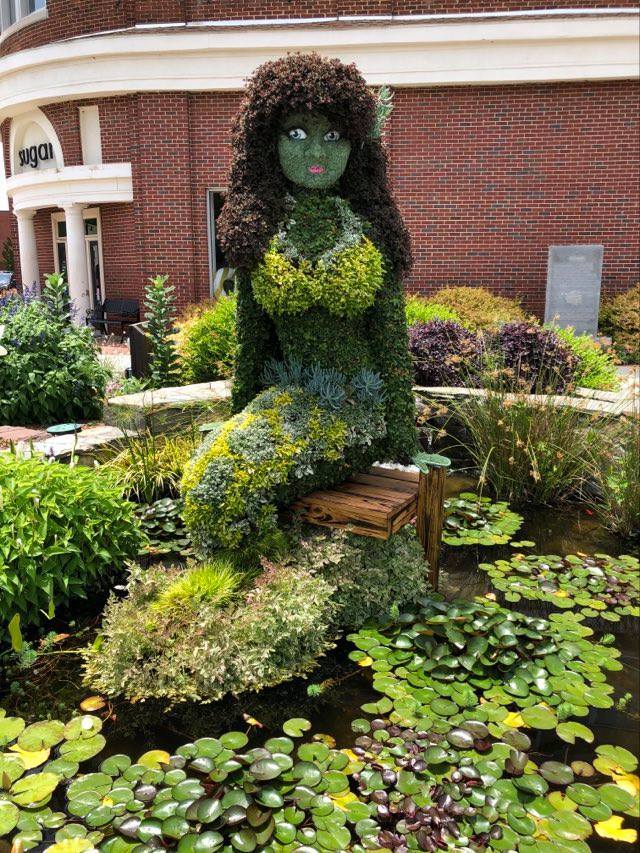 The South Carolina Festival of Flowers runs the entire month of June, with the main weekend taking place early in the month. This year, the main weekend will run from June 11 to 13. Along with the signature topiaries, the three-day festival showcases the best of Greenwood and is filled with tons of fun for the whole family.

The happenings kick off on Friday morning with an arts and crafts show and a home and garden show. Both are held indoors at the Greenwood Mall from Friday through Sunday. Friday night features a concert at the Greenwood Community Theatre on Main Street. 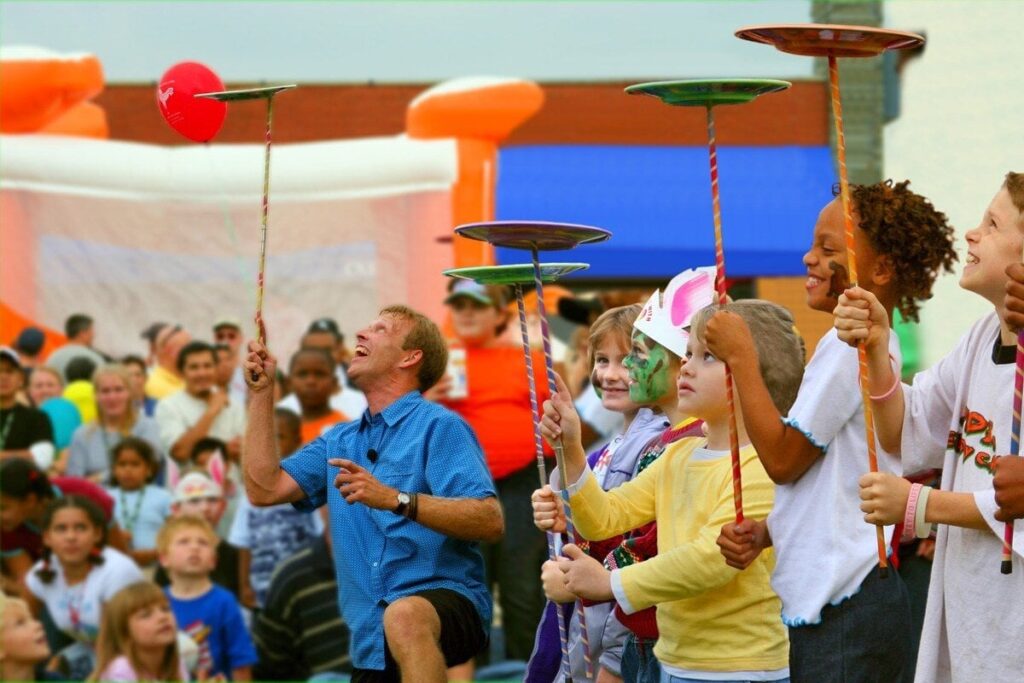 Saturday-morning festivities begin with a 5-kilometer run/walk and a 1-mile fun run/walk at Lander University. Compete for cash prizes, or just for fun and exercise. Saturday also includes the fun-filled and entertaining Kidfest at Uptown Market and its splash pad. This part of the festival features arts, crafts, demonstrations, robotics, fire trucks, Carolina Choo-Choo train rides, food trucks, and concessions. Rounding out the family fun is a performance by world-renowned entertainer Mark Lippard, and the South Carolina Aquarium will be on hand with an enrichment program and some special surprises.

Another festival favorite is the Saturday-evening Topiaries and Tastings event. Adults can enjoy a casual evening of wine tasting while strolling through topiaries and Uptown businesses. A souvenir wine glass is included.

As mentioned, the main festival is a weekend event in early June, but there are many other events held throughout the month. These include a digital photo contest, aviation expo, Bee Buzzin’ Bike Tour, and men’s golf tournament. Oh, and did I mention that the topiaries will stay up for public viewing until mid-July​?

While visiting Uptown Greenwood for the Festival of Flowers, be sure to stop in at The Arts Center to see the BLOOM Art Exhibit and The Museum and Railroad Historical Center.

There is so much happening in Greenwood during the South Carolina Festival of Flowers. Be sure to check the festival’s website for details and a list of all events, locations, dates, and times.

Where To Stay And Eat

If you plan to stay awhile, the Inn on the Square is a charming, full-service boutique hotel conveniently located in Uptown. Housed in an early 20th-century building, the inn has a warm and welcoming atmosphere. The dramatic three-story lobby is impeccably furnished — a place where one actually wants to sit and spend time. The Inn on the Square is the official inn of the South Carolina Festival of Flowers.

There are several major chain hotels in Greenwood, as well as many fabulous eateries.

Home Videos The WORLD of WINE – Wine News. Cheap wine, tasting notes and cooking with wine The World of Wine – May 2021 … END_OF_DOCUMENT_TOKEN_TO_BE_REPLACED

How to visit Napa Valley on a Budget. In this video Carson and I explain a few ways to enjoy Napa on the cheap. Tip and advice about how to visit Napa … END_OF_DOCUMENT_TOKEN_TO_BE_REPLACED

Home Videos Get To Know Argentina Wine | Wine Folly If you love Malbec, Argentina is your ultimate wine region. But that’s not … END_OF_DOCUMENT_TOKEN_TO_BE_REPLACED