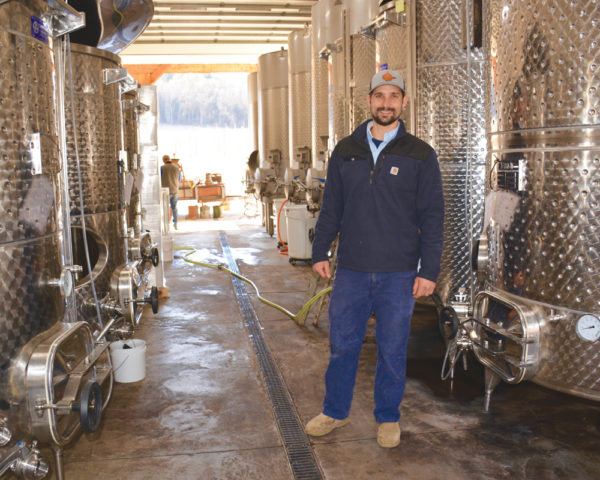 Before visiting the Iron Heart Winery, which is located on the Fariss Farms in Allisonia, I had already seen the unique labels that are affixed to every bottle of wine produced there.

All of the Iron Heart Winery labels feature local women, who seem imbued with a determination to do what needs to be done, whatever that may be.

“The reason why we have bold women on our labels comes from stories that my father and his siblings told about my great grandmother Minerva Fariss,” said Adam Fariss, owner of Iron Heart Winery. “She was the most caring, compassionate lady that they knew, but she was also tough as nails.”

The faces periodically change on the 12 different types of wine available at Iron Heart, except for the Chardonnay, which features and will always feature Fariss’s wife, Laurie.

Fariss grew up on Farris Farms, graduated from PCHS in 2003 and then went on to attend Roanoke College, where he studied Business and Administration.

“I think it’s important to you understand the mechanics of business, whether you’re a farmer or making widgets,” stated Fariss. “You have to understand how to run a business and how to keep everything together if you can’t pay the bills.”

Through an internship, Fariss found work with Volvo and took a full time position in Greensboro, as a Product Analyst.

“I was doing a lot of the support work for a product manager who was establishing warehouses up and down the East Coast and in other parts of the world for Volvo,” Fariss recounted. “We helped redesign a couple of factories in terms of the material flow. So, I worked for Volvo logistics and that’s what we focused on was the movement of material around the world.”

So how did a fellow in Volvo’s upper management end up opening a vineyard?

Fariss transferred to Southwest Virginia in 2010 and continued working for Volvo where he managed the freight for their production facilities and warehouses in North America.

“I realized that if the farm didn’t start to sustain itself financially that it had to be broken up and sold. We looked at cabbage, broccoli, garlic, cattle, sheep, but most of our farm is heavily wooded and we already had it under a timber management plan. So, what we had available in terms of cleared land wasn’t really suitable for high volume meat production or animals. So we kind of settled on commercial fruit and then eventually wine. We were not really wine people before this. We just wanted to make sure that we could keep the farm in the family for generations.”

The Fariss family planted their first grape vines in 2010, but only certain grapes can handle the relatively cold winters of Southwest Virginia.

“We have 11 and a half acres of fruit,” said Fariss. “We’re at 1,900 feet above sea level, so we’re in a moderately cold zone. We only have about 222 growing days through the calendar year. We have a very late spring frost and we have a pretty early fall frost and so we’re kind of tied there. In terms of cold hardiness, we had to find varieties that would fit into that.”

“On our first five acres we planted Chardonnay, Riesling, Vidal Blanc, Chambourcin and Cabernet Franc,” he continued. “Those are varieties that we thought would do really well at our site.”

“Cabernet Franc is very light in color and flavor, almost like a Pinot Noir. It’s going to have very jammy presentation. Ours is heavily oak, so it has a really great vanilla finish. There’s lots of dark fruit flavor like plum, black cherry and dates. In Virginia, you see Cabernet Franc as its own varietals. Around the world, it’s kind of like the stepchild, so it gets blended into a Bordeaux blend and it adds this kind of peppery, jammy note, but it wouldn’t necessarily get the leading role on the label. It’s the same with the Chambourcin but it’s a hybrid variety.”

“A fantastic growing season would be a decent amount of rain in the spring but not too much where it’s compromising the blossoms,” he said. “Then just the right amount of sporadic rain in the summer to keep the crop moving but not growing mildew or fungus. Then hopefully no rain in the fall because your fruit becomes fragile when it swells with juice.”

It was bottling day when I arrived at Iron Heart Winery. Farris and his team were getting set to bottle the 2020 vintage.

“So 2020, we only harvested like 10% of our normal expected fruit yield because we had five terrible frosts in May,” Farris explained. “It just destroyed all of our buds. Your primary buds gave you two fantastically gorgeous clusters per shoot. If you kill the primary bud, you have a secondary bud but they’re kind of like the flunky in that they might or might not give you a good quality cluster and maybe not at all.”

“Anyway, we lost 90% of our fruit and instead of throwing it away, we decided just to harvest it all in a manner that allowed us to put everything together. It’s a pink line and we’re calling it the “Train Wreck 2020.” Half of it will be sweet and half it will be dry and that’s what we’re bottling today.”

Luckily, the Iron Heart Winery has a warehouse full of wines from several past vintages. These wines are sold in 42 stores exclusively in Southwest Virginia, though online purchases are available.

Huge tanks are lined up in two rows in the production warehouse, which equates to a capacity to store 14,000 gallons of wine. Wooden barrels are positioned in rows nearby and gadgets only a vintner would understand, are interspersed throughout the room.

As we stepped outside to view the 6,656 vines growing at the Iron Heart vineyard, we stood beside a large trailer that was parked in front of the bottling building that was full to the brim with antiques.

The day before, Adam and Eduardo, who works part time at the winery, traveled to North Carolina to purchase an impressive variety of agricultural implements and items all made in the distant past.

Iron Heart Winery consists of several structures dating back to the era when mining operations were ongoing and the Boom Furnace, at the entrance of the farm, was smelting iron ore and making pig iron to ship to Pulaski.

These structures have been renovated and are now used as cabins for guests, or as in the case of the old corn crib, a fancy wine tasting room.

Since 1999, Adam’s father, Dr. Bruce Fariss, had practiced medicine in the building across the street from the McDonald’s in Dublin.

“He decided to retire last year,” Fariss said of his father. “He wanted to start some other enterprise to keep himself busy and so we looked at a plethora of ideas and then kind of settled on the production of spirits.”

The antiques are destined to be used as décor for a new distillery located in Dr. Fariss’s former office building in Dublin. This distillery will produce brandy and will have a direct tie to the winery.

“Through the normal process of operating, you’ll have a few gallons of wine that gets spent,” Fariss explained. “Whenever you’re filtering, you have wine that spills over. It’s good wine, but it can’t be put back into the tank. We use a paper membrane filter press and as it’s filtering, it’s dripping the whole time into a catch pan. This would normally go down the drain, but we’ll catch it and we’ll be able to distill that into brandy. The other cool thing is that we’re only 30 minutes from Cana, Virginia, that produces apples, peaches, strawberries, blueberries, blackberries and nectarines commercial scale. So we can ride down the mountain and pick up some fantastic fruit to make brandy out of.”

The name of this new Dublin distillery will be “Salty Stache.”

The “Salty” part of the name comes from a nickname Fariss gave to his father.

“Dad was 86. Very stoic and very gruff, but a brilliant man,” said Fariss. “So for Memorial Day he wore his Dress Blues with all his medals. We took pictures of Dad at the tasting room in his uniform, and it just went viral! Then on the Fourth of July, he dressed up like Uncle Sam. After that, he started ordering these wacky costumes on the internet. He had a white tuxedo with tails. So every major holiday and event, he would wear these outfits and made a name for himself on social media as ‘Salty Dad.’”

The “Stache” refers to Adam’s fascination with handlebar mustaches, though apparently the mustache wax required to maintain a perfect handlebar tends to melt behind a mask.

When Salty Stache opens, patrons should be able to enjoy a glass of their favorite variety of Iron Heart wine.

Until then, Fariss will work the farm, while enjoying the company of his wife and three children. Not surprisingly, the family tends toward outdoor activities, especially when there is water involved.

The orchard has a very different appearance in the winter months with the vines still barren of chutes and blossoms. But spring is coming and maybe by sometime next year, patrons can come into the Salty Stache and have a glass of the 2021 vintage of one of the many varietals produced by the Iron Heart Winery.

Home Videos The WORLD of WINE – Wine News. Cheap wine, tasting notes and cooking with wine The World of Wine – May 2021 … END_OF_DOCUMENT_TOKEN_TO_BE_REPLACED

How to visit Napa Valley on a Budget. In this video Carson and I explain a few ways to enjoy Napa on the cheap. Tip and advice about how to visit Napa … END_OF_DOCUMENT_TOKEN_TO_BE_REPLACED

Home Videos Get To Know Argentina Wine | Wine Folly If you love Malbec, Argentina is your ultimate wine region. But that’s not … END_OF_DOCUMENT_TOKEN_TO_BE_REPLACED