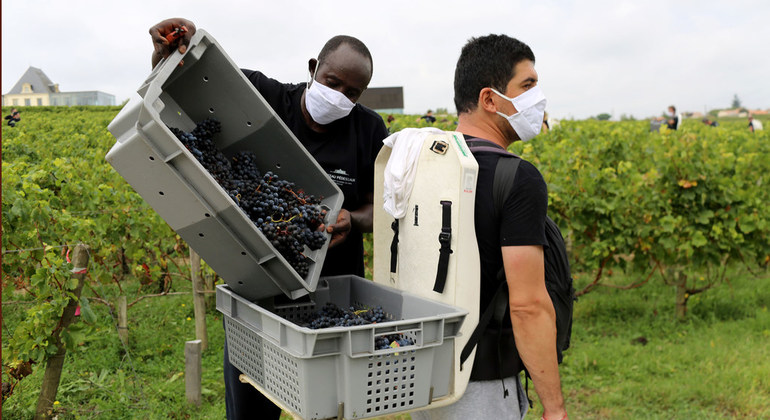 In his former life, in Syria, Hussam worked as a journalist, and was an elite athlete. “I was the Syrian kickboxing champion three times”, he says. However, the conflict in the country put paid to his professional and sporting ambitions. “I was shot in the chest, and after that I stopped taking part in sports”.

Forced to leave , Hussam sought refuge in France, where he found employment in the vineyards of the Bordeaux region, working as a seasonal worker at Château Pédesclaux, which produces Pauillac, one of the famous Bordeaux “Grands Crus” fine wines.

Hussam is one of dozens of refugees providing a vital service to an industry that often finds it hard to find enough labour at harvest time, a shortage that has become more serious since the COVID-19 pandemic saw travel restrictions making it much harder for migrant workers to enter the country.

Hussam, a refugee from Syria has been taking part in rugby training which brings together refugees and the local community.

Rugby to the rescue

“There was a lot of uncertainty about our ability to find people to work among the vines, But the vines won’t wait for us” says Vincent Bache-Grabielsen, technical director of Château Pédesclaux. “We have to follow the cycle of the seasons”.

Searching for a solution, the vineyard turned to Ovale Citoyen, a local association that uses rugby (Bordeaux is not only a famous wine region, but also the heartland of French rugby) and other sports as a way of promoting team-building and inclusion.

Since the beginning of the COVID crisis, the association has also offered seasonal work to people in need, including refugees, in a project called “Drop in the Fields”, a play on words that refers to drop goals, a way of scoring points in rugby.

Dozens of refugees have been filling a labour gap during the grape harvest season.

Ninety refugees helped bring in the grapes during the last harvest, and a further 15 took part in training for other viticulture-related jobs, such as tractor driving, which offer the possibility of year-round employment. Ovale Citoyen also offers training for a wide range of careers in the wine industry, as well as social and legal support.

Sport plays a central role, in part because Ovale Citoyen was created by former professional rugby players from Union Bordeaux Bègles (the word ‘ovale’ refers to the oval shape of a rugby ball). The group also promotes football and boxing.

“Rugby has social values, values ​​of the heart, and it seemed very important to us that refugees should be able to benefit from them,” says Jean François Puech, one of the Ovale Citoyen founders, explaining that the association advances social integration and the idea that everyone has a place on the field regardless of their social situation, their level of education or their physique. “Whatever a person’s origin, religion, sexual orientation or even their history, every human has the right to happiness”.

“Ovale Citoyen encouraged me to get back into sport”, says Hussam. “Rugby has given me many important things: It’s given me contact with the local community, new friends, and it’s given me hope”.

Home Videos The WORLD of WINE – Wine News. Cheap wine, tasting notes and cooking with wine The World of Wine – May 2021 … END_OF_DOCUMENT_TOKEN_TO_BE_REPLACED

How to visit Napa Valley on a Budget. In this video Carson and I explain a few ways to enjoy Napa on the cheap. Tip and advice about how to visit Napa … END_OF_DOCUMENT_TOKEN_TO_BE_REPLACED

Home Videos Get To Know Argentina Wine | Wine Folly If you love Malbec, Argentina is your ultimate wine region. But that’s not … END_OF_DOCUMENT_TOKEN_TO_BE_REPLACED